Raiders stadium will have fans, but for college game not NFL 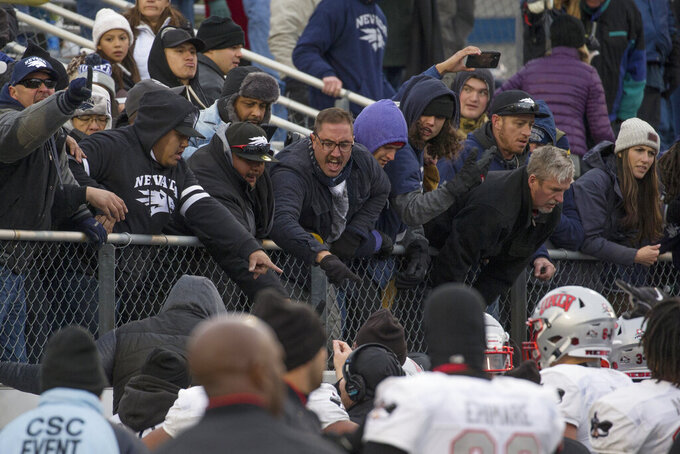 FILE - In this Nov. 30, 2019, file photo, fans shout at players during a post-game scuffle at the end of an NCAA college football game between UNLV and Nevada in Reno, Nev. The Las Vegas Raiders were the first team to play inside Allegiant Stadium. But the UNLV Rebels will be the first team to play with fans inside the $2 billion dollar venue, when they host in-state rival Nevada on Saturday, Oct. 31, 2020. (AP Photo/Tom R. Smedes)

LAS VEGAS (AP) — The Raiders were fittingly the first team to play inside Allegiant Stadium, their sparkling new home near the famed Las Vegas Strip.

But the first fans allowed inside the $2 billion venue will be there to cheer on the UNLV Rebels, not the Silver and Black.

UNLV is scheduled to host in-state rival Nevada on Saturday in the annual battle for the Fremont Cannon, college football’s largest rivalry trophy. It will be the first game played with a crowd at the stadium because the Raiders have decided to play their inaugural season in Las Vegas before empty seats amid the pandemic.

“They’re our roommates there at the stadium,” Raiders owner Mark Davis said. “If they want to have fans there that’s their prerogative. Whether they feel it’s safe and everything else, that’s their decision-making process.”

The university’s plan to allow a limited number of spectators was recently approved by the Southern Nevada Health District and Nevada’s department of Business & Industry. UNLV can use 3% of the domed stadium’s 65,000-seat capacity, which means there will be about 2,000 spectators allowed.

Fans attending the game must be screened upon entering and will be required to wear face coverings and maintain social distancing. The approval is strictly for UNLV’s first two home games at Allegiant Stadium. The school said plans must be resubmitted for any games after that.

Davis said one positive he takes from UNLV allowing fans in the building is that it will give stadium operations an opportunity to get workers acquainted with the building.

“It’s kind of like a trial run and I think that’ll be a positive in the long run,” said Davis, who hasn’t attended any of the Raiders’ three home games.

Davis has previously said he either wanted to allow all fans to attend or none and that he wouldn’t go to games if the fans weren’t allowed.

First-year UNLV coach Marcus Arroyo, whose team started the shortened season with a 34-6 loss at San Diego State, said he would love to see the stadium sold out.

UNLV has won two straight and three of the last five in the series — all under former coach Tony Sanchez — after the Wolf Pack dominated the rivalry by winning nine of the previous 10 meetings.

Last season’s game in Reno ended with a brawl that resulted in the Mountain West handing out suspensions to four players from each team.

Arroyo said during his weekly news conference that while there’s a lot of pride in the Fremont Cannon game, a rivalry Nevada leads all-time 27-18, he doesn’t want the Rebels believing a season’s success hinges on it.

“You don’t want to ever downplay a game because that’s not the reality of it,” Arroyo said. “You don’t want to hang the season on it either. One victory in a season over your rival, you shouldn’t feel like that’s a successful season.”