Raiders unable to utilize all their new digs in Las Vegas 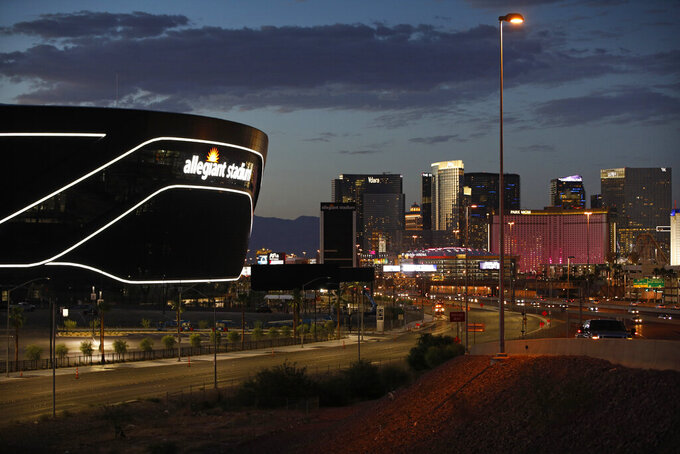 FILE - In this July 22, 2020, file photo, the sun sets behind Allegiant Stadium, new home of the Las Vegas Raiders football team, as it nears completion in Las Vegas. Officials in Nevada have declared "substantial completion" after nearly 1,000 days of construction of the $2 billion Allegiant Stadium in Las Vegas designed to be the home of the NFL's relocated Raiders. (AP Photo/John Locher, File)

After years of playing in a dilapidated stadium in Oakland with a rundown team facility, the Raiders were looking forward to showing off their fancy new digs in Las Vegas this season.

Those plans have been altered by the COVID-19 pandemic.

The Raiders will play their first season at $2 billion Allegiant Stadium near the Las Vegas Strip without any fans and have been unable to fully utilize the new practice facility they built in nearby Henderson.

“I mean disappointing for all of sports honestly,” coach Jon Gruden said Thursday. “Certainly, you see that stadium and you want to go in there and you want to cut it loose with your new fan base and it is disappointing. But we aren’t the only team that feels that. We are doing what we feel is right for the safety and health of everybody and hopefully we beat this virus soon and we can get back to normal.”

Owner Mark Davis told season-ticket holders earlier this week about the decision not to allow fans this season after consulting with local health officials.

Davis had previously said he either wanted to allow all fans to attend or none and that he wouldn’t go to games if the fans weren’t allowed.

The pandemic has also limited what the Raiders can do at their new facility to replace the outdated one the team had been using in the Bay Area.

With players required to socially distance, the team has been unable to gather as a group yet.

“We haven’t had a team meeting, we haven’t had a group quarterback meeting or an offensive meeting or defensive meeting. Everything is on quarantine,” Gruden said. “A lot of this facility is off limits. We have done an unbelievable job, from a safety standpoint, to protect our players and coaches and employees here. But, players that have been with the Raiders for many years are just star-struck with this facility. I think the new players all respect it and really appreciate it.”

The coronavirus has impacted the Raiders roster as well. They had three players opt out this season with linebacker Ukeme Eligwe, cornerback D.J. Killings and defensive end Jeremiah Valoaga all deciding not to play in 2020.

The team then placed edge rusher Maxx Crosby and running back Rod Smith on the reserve/COVID-19 list Thursday. The list was created for players who either test positive for COVID-19 or have been in close contact with an infected person.

Running back Devontae Booker previously spent time on that list. He and Smith are among the players competing for a spot as a backup running back on the roster.

Crosby is being counted on to contribute much more after recording 10 sacks as a rookie. He is slated to be a starting defensive end and is the top pass rusher on a team that has struggled to generate consistent pressure in recent years.