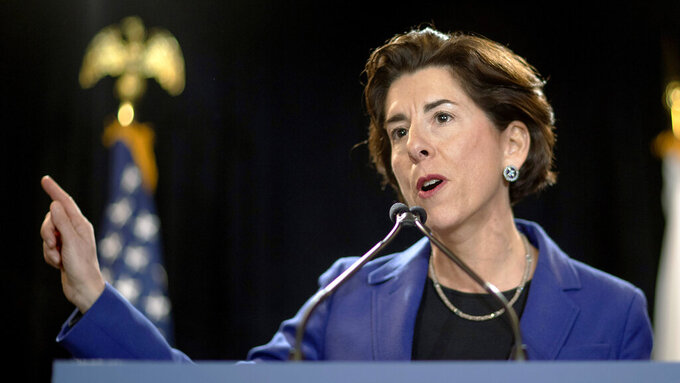 PROVIDENCE, R.I. (AP) — While acknowledging there have been “bumps in the road,” Rhode Island Gov. Gina Raimondo in her first media interview since December defended the state's coronavirus vaccination efforts and pledged to keep working on improvements to the system.

“I know folks are frustrated with the pace of vaccinations, but our strategy is working and you can see that because hospitalizations have been dropping like a rock,” Raimondo told WPRI-TV and The Providence Journal outside the State House on Tuesday after a virtual vaccination rollout briefing.

The Democrat has been nominated by President Joe Biden to be his administration's commerce secretary and had not answered questions from the media since Dec. 22.

She said she remains committed to working for Rhode Islanders until her confirmation.

“I can tell you I’m working as hard as I ever have as the governor,” Raimondo said. “My day-to-day hasn’t changed that much.”

The state's vaccination efforts have been hampered in part by supply, but that is expected to be bumped up to 19,000 first doses per week by the end of February, she said. So far almost 90,000 residents of Rhode Island have received a first dose, and almost 38,000 have been fully vaccinated, according to state Department of Health statistics released Wednesday.

“Rhode Island’s actually doing very well, relative to other states in terms of people being fully vaccinated with the two shots,” Raimondo said. “Having said that, we’re going to keep working to make sure it goes faster and faster.”

She also defended the use of pharmacy chains CVS and Walgreens to help with the vaccination effort, despite some early glitches in their signup systems.

“It made sense to rely on CVS and Walgreens, because they have an infrastructure, they have the pharmacy infrastructure and we want to be where people are,” Raimondo said. “Having said that, there have been too many bumps in the road.”

She said she decided to let Lt. Gov. Daniel McKee, who will take over from her if she is confirmed by the U.S. Senate, be the face of the state's vaccination rollout and he is “doing a great job.”

The number of patients with COVID-19 in Rhode Island hospitals has fallen to its lowest level in more than three months, according to state Department of Health numbers released Wednesday.

There were nearly 240 people hospitalized with COVID-19 as of Monday, the latest day for which the information was available, the lowest single-day total since Nov. 5.

The department also reported more than 450 new confirmed cases and 11 more fatalities, for totals of almost 120,000 known cases and 2,259 deaths.

The latest seven-day average positivity rate in Rhode Island is 2.71%. State health departments are calculating positivity rate differently across the country, but for Rhode Island the AP calculates the rate by dividing new cases by test encounters using data from The COVID Tracking Project.

The seven-day rolling average of daily new cases in Rhode Island has now declined from about 761 on Jan. 26 to about 463 on Tuesday, according to the tracking project.

A Rhode Island school district that had largely resisted pressure to bring students back to the classroom has approved a plan to resume in-person learning for most children.

Only preschool, kindergarten and students in special populations had been approved for school in person.

The school committee was under pressure from many parents, who rallied last weekend in support of in-person learning.

The teachers’ union, which had previously been opposed to in-person instruction, said it now supported in-person learning for elementary students, but not high school students.