Raimondo says state still on target for May 9 restart 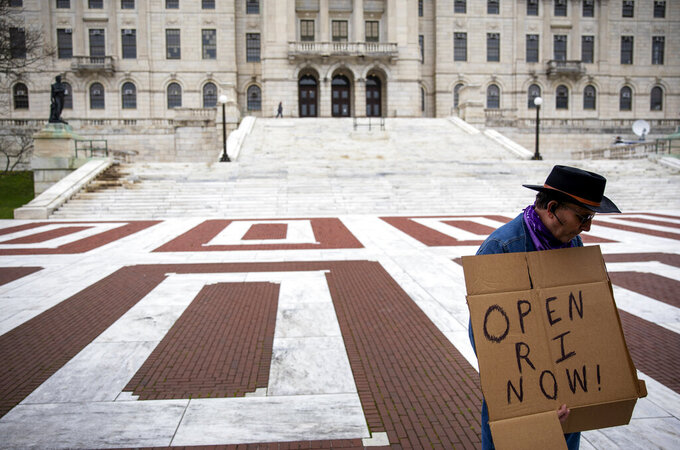 James Dunn stands outside the Statehouse with a handmade sign in favor of reopening the state economy as Gov. Gina Raimondo delivers her daily briefing inside, Friday, May 1, 2020, in Providence, R.I. Raimondo said she still hopes to lift Rhode Island's stay-at-home order in about a week, even though the daily number of new coronavirus cases in the state only appears to have reached a plateau and is not yet on the decline. (AP Photo/David Goldman)

Gov. Gina Raimondo said Friday she still hopes to lift Rhode Island's stay-at-home order in about a week, even though the daily number of new coronavirus cases in the state only appears to have reached a plateau and is not yet on the decline.

“If we continue to stay on this path we are on now, it is my intention to let the stay-at-home order expire on May 8,” the Democrat said at her daily news briefing.

But she warned that a phased restart of the economy and planned reopening of some state parks beginning the following day is “not a foregone conclusion,” especially if people stop social distancing practices or there is a surge in new cases.

The state Department of Health reported 341 new confirmed cases of COVID-19 on Friday, about 30 fewer cases than the previous day.

The number of people hospitalized with the disease was up slightly Friday, but the number people in intensive care and on ventilators were both down, which state Department of Health Director Nicole Alexander-Scott viewed as good news.

The state also reported 13 new deaths Friday, for a total of 279 fatalities since the pandemic began. The daily death total does not mean all of those fatalities occurred in the previous 24 hours, as it sometimes takes days to confirm a cause of death.

Of the 13 new deaths, 11 were in their 70s or older, including one centenarian, Alexander-Scott said.

Raimondo said as the economy gets rolling again, she realizes people are going to need child care. With that in mind, she has asked all child care providers in the state to submit their reopening plans to the Department of Human Services by May 23, with a target reopening date of June 1.

Anyone who has been victimized or harassed by a debt collector should call the attorney general's office, who could initiate legal action, she said.

The assistance checks should be used to pay bills, she said.

A Brown University student has filed a class-action lawsuit against the Ivy League school seeking reimbursement for tuition, room, board and other expenses associated with the campus closure in response to the coronavirus pandemic.

The suit filed Thursday in federal court in Providence alleges breach of contract and unjust enrichment on the part of the school.

“College students enrolled in classes when the COVID-19 outbreak struck were left with no access to their dorms, to classrooms, campus cafeterias or other facilities they paid to use,” Steve Berman, an attorney for the students, said in a statement. “We believe there’s absolutely no reason why they should continue to be stuck holding the bill for tens of thousands of dollars, only to be kicked off campus.”

Brown is aware of the lawsuit, although it has not been served, university spokesman Brian Clark said in an emailed statement.

“During this time of global crisis, no aspect of our daily lives are what anyone expected. However, what has not changed is the core value of a Brown education," he said.

The city of Providence is reopening some parks and closing about 13 miles of city streets to vehicular traffic starting Saturday to give residents more space to stretch their legs and get some fresh air during the coronavirus pandemic.

When the city shut down parks last month, residents took to the sidewalks, which made it difficult to maintain social distancing, according to a statement from the city Planning and Development Department.

When walking in the streets, residents will be required to limit family groups to five or less, wear masks and stay at least six feet apart from other groups.

The site at the Rhode Island College hub on Dexter Street is an important asset for a city where as much as 25% of the population does not have access to private transportation, the city said in a statement.

Nearly 450 city residents have tested positive for the virus as of Friday, according to the state Health Department.

Testing is by appointment only.