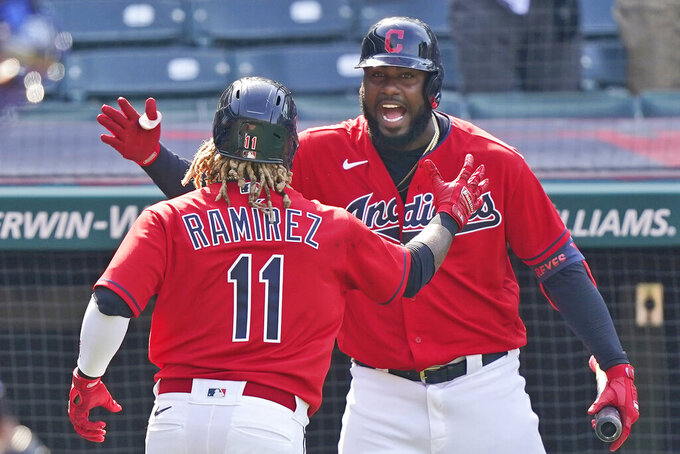 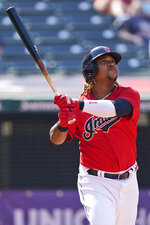 CLEVELAND (AP) — When José Ramírez’s shot to deep right field narrowly missed being a home run, Shane Bieber knew what was coming next.

Ramírez’s second two-run homer of the game snapped a tie in the eighth inning and sent the Cleveland Indians to a 4-2 win over the Kansas City Royals on Wednesday after Bieber struck out 12 for the second straight game.

Ramírez's one-out shot in the eighth off Greg Holland (0-1) gave the Indians their first home win in 2021 after they were shut out 3-0 on Monday.

In the sixth, Ramirez, who was fooled by a pitch and struck out in his first at-bat, hit a long foul to right before connecting for a two-run homer to bring in Cleveland's first runs at Progressive Field this season.

It was the kind of performance the Indians have come to expect from their All-Star third baseman, who finished second in the MVP voting last season and third in 2017 and 2018.

“He’s a gamer, man,” Bieber said. "It never turns off. Whether it’s going good or it’s not, he’s the same guy and he brings that same energy and that’s why we rely on him so much. Not just physically, but as a leader in the clubhouse, the way he goes about everything.

“Really can’t say enough about the guy. He comes up in big moments like he did today and that’s why he’s our guy.”

Emmanuel Clase (1-0) pitched the eighth — all nine of his fastballs were over 100 mph — and Nick Wittgren worked the ninth for his first save since Sept. 4, 2019.

Salvador Pérez homered for the Royals.

Bieber had his second strong start of the season, fanning 12 and allowing just two runs and three hits in 6 1/3 innings. But the right-hander remains winless as the Indians continue to struggle at the plate through the season's first week.

The right-hander extended his streak of striking out at least eight to 14 games, tying Corey Kluber’s club record.

Hall of Famer Randy Johnson holds the major league mark with 17 in a row.

The Indians only got three hits Monday, and they didn't get a runner to second through the first five innings against Kansas City starter Jakob Junis, who was only slated to pitch a few innings in what was supposed to be a bullpen game.

“I thought I was going two innings,” said Junis, who gave up one hit in five innings. “I didn't think in a million years I'd go five innings.”

It was 73 degrees and sunny when Bieber threw his first pitch, a 41-degree jump from opening day last week in Detroit, where he pitched in swirling snow over the first few innings.

Pérez ripped Bieber's first pitch of the fourth into the trees beyond the center-field wall to put the Royals ahead 1-0.

SHOT IN THE PARK

With an early-season off day, half of Cleveland's roster received COVID-19 vaccines on Tuesday. Francona said the Cleveland Clinic administered the shots at Progressive Field.

Francona understands there may be players who don't want to get vaccinated — for a variety of reasons.

“That’s everybody’s personal choice,” he said. “You can’t make somebody do that. That wouldn’t be right. I hope we get to a certain amount though, where we are able as a team to relax some of the restrictions. That would be helpful.”

Kansas City's Carlos Santana received a warm ovation before his first at-bat in Monday's opener as Cleveland fans thanked the popular first baseman for 10 seasons with the club.

He appreciated the gesture.

“Respect,” Santana said when asked about the cheers. “Respect the fans, respect the team. Respect the city. Respect the organization that gave me the opportunity for 10 years.”

The Royals are opening the season with eight straight day games, the club's longest run of afternoon baseball since 1979. Kansas City is scheduled to play 62 days games in 2021, which would match the 1971 Royals for the most in team history.

Indians: After another off day, Cleveland opens a three-game series against Detroit. Zach Plesac (0-1) will face RHP Julio Teheran (1-0), who beat the Indians last weekend.