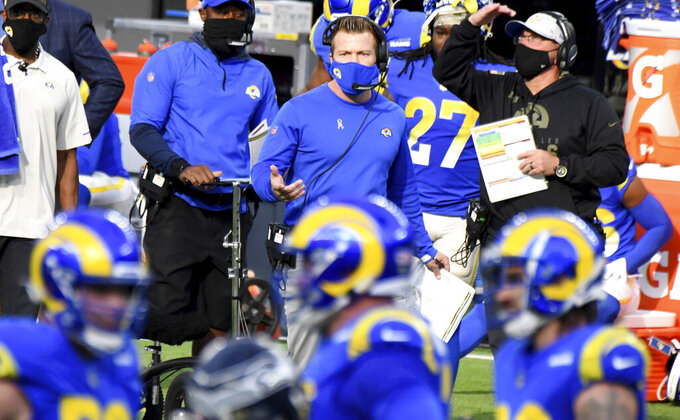 THOUSAND OAKS, Calif. (AP) — Sean McVay was driving home from work Tuesday night when he got a phone call from Reggie Scott, the Los Angeles Rams' director of sports medicine.

“I had a funny intuition that this was our first positive COVID,” McVay said.

The Rams (6-3) were back at work Thursday preparing for their trip to Tampa Bay (7-3), but they did it under the heightened protocols now required for the entire league. Social distancing and protective gear are doubly emphasized, and in-person contact is minimized.

And that's what made McVay boil over with frustration Thursday at the state of the world and its ineffectiveness in handling the coronavirus pandemic.

“It’s an important part of what we do, but I’m telling you, I hate it,” McVay said about the masks, face shields and distancing necessary during his teaching sessions. “It goes against everything I believe and like about communicating with people, being able to have that sort of interaction. I hope this ends sooner than later, because it’s going to make us bad communicators. It’s going to take away the essence of what’s good about human beings if we don’t get this thing figured out soon. It drives me crazy.”

After a long pause in his daily news conference, McVay hastened to pinpoint the source of his frustration.

“But I’m going to follow the protocols,” he said. "I love all of it. I think it’s smart. I’m not questioning that. I’m questioning how crazy this makes me because you can’t have interaction with people, and that’s what you love the most. It takes all that away. I hope we get this figured out, especially for kids and things like that. It bothers me, it really does.

“I’m not minimizing the importance of following all these steps. I’m talking about this corona is for the birds, not the protocols.”

While McVay didn't literally scream at his fellow citizens to wear a mask and stay home for Thanksgiving, the young coach voiced the frustration likely shared by millions of Americans — particularly his fellow teachers — while their nation lags behind the world in infection prevention.

McVay thrives in a classroom atmosphere, and the Rams have built a huge outdoor tent in their parking lot where they've been conducting team meetings since the start of training camp. But it's just not the same for McVay if he can't interact with his players on a personal level, and the COVID-19 precautions make everything tougher.

The Rams realize they have no option but to figure it out, and they're working on it this week while they prepare for Tom Brady and the Buccaneers' explosive offense.

“We adjust and we adapt,” said Brandon Staley, the Rams' rookie defensive coordinator. “This year, one of our hallmarks for the Rams is trying to have great agility, because this year is unlike any we’ve ever experienced, so it requires great agility, great synergy within your organization to get things organized quickly. We just try to go with the safest and most secure way of meeting and getting everything accomplished. We certainly have the technology and the resources to get it done.”

McVay also wasn't upset at his infected player after learning the probable circumstances through contact tracing and conversations. The player is asymptomatic, he said.

“I do not believe that the person that got it for us was making bad decisions,” McVay said. “Sometimes you’re just around somebody and they don’t even realize they have it, and you end up getting it. ... With all the unknowns, it’s not exclusive to just making bad decisions, and we want to try to minimize the opportunities by making good decisions, and hopefully that will lead to this being a minimal impact on our team.”

The Rams won't know for several days whether they were able to contain the outbreak to just one player, so they're preparing for their fifth East Coast trip of the season as if everything is as normal as possible in an abnormal world.

NOTES: C Brian Allen was the only addition to the Rams' injury report. The backup was limited in practice with a knee injury. The rest of the Rams' injured players have already been moved to injured reserve. ... CB Darious Wiliams wasn't on the injury report despite landing hard on his shoulder during last Sunday's win over Seattle. ... LB Obo Okoronkwo worked out on the field during practice as he returns from elbow surgery. McVay laughingly noted he saw Okoronkwo working out in the weight room shirtless, but with a mask on.