Raptors to keep calling Tampa home for rest of season 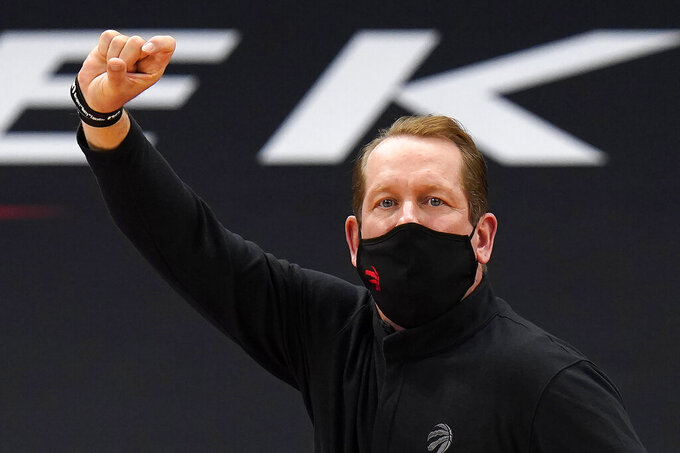 Toronto Raptors head coach Nick Nurse calls a play during the second half of an NBA basketball game against the Orlando Magic Sunday, Jan. 31, 2021, in Tampa, Fla. (AP Photo/Chris O'Meara)

The Toronto Raptors aren’t going back to Toronto this season.

Ongoing challenges related to the coronavirus pandemic and how that affects the process of crossing the border between the U.S. and Canada will keep the Raptors in their adopted Tampa, Florida, home for the remainder of the regular season, the team said Thursday.

“It took us a while to get settled in," Raptors coach Nick Nurse said Thursday before Toronto played at Boston. “I think to pick up shop and go back and try to re-settle in, kind of like you would at the start of the fall ... we're just kind of getting settled in, we might as well finish it out now."

The Raptors are 6-5 in their “home” building this season, Amalie Arena, which they’re sharing with the Stanley Cup champion Tampa Bay Lightning. Tampa also has the reigning Super Bowl champion Buccaneers and the Tampa Bay Rays played in the World Series last season.

“Florida has been really welcoming to us and we’re so grateful for the hospitality we’ve found in Tampa and at Amalie — we’re living in a city of champions, and we intend to carry on the tradition of winning for our new friends and fans here,” Raptors President Masai Ujiri said. “But home is where the heart is, and our hearts are in Toronto. We think often of our fans, of our Scotiabank Arena family, and all those we are missing back home, and we can’t wait until we can all be together again.”

The decision is hardly unexpected given the state of the pandemic in the U.S. and Canada. Canadian Prime Minister Justin Trudeau announced Tuesday that starting next week any nonessential travelers arriving in Canada by land will need to show a negative PCR-based COVID-19 test or face a fine if they don’t have one.

That wouldn’t be an issue for NBA teams; traveling parties are tested daily, players multiple times a day.

The bigger issue is logistics. The land border already remains closed to nonessential travelers who are not Canadian citizens; Canada requires those entering the country to isolate for 14 days, which wouldn’t be feasible for NBA teams, and the Canadian government has also strongly discouraged nonessential travel for any reason.

Toronto made the move south last fall, knowing Thursday's decision was a real possibility. The Raptors haven't played in Toronto since Feb. 28, 2020; they had just finished a five-game trip when last season was suspended for the pandemic on March 11, then went to the NBA's restart bubble at Walt Disney World in Lake Buena Vista, Florida for the end of the regular season and the playoffs.

If the Raptors play their full allotment of 72 games this season and then go into the postseason this spring, it will mean Toronto will have played at least 100 straight games outside of Toronto.

“Hope we can get back there and start next season from Day 1, for sure," Nurse said.

The Raptors tried to simulate the comforts the team has at home in Toronto, at least as much as possible. “We The North” — the team motto — signage is everywhere in the hotel that the Raptors are using as a practice facility in Tampa, from the elevator doors to the ballroom wall behind one of the baskets. The court that the Raptors use for games was shipped down from Toronto. And there’s a 2019 world championship banner swaying from the rafters, alongside the Lightning’s retired jerseys for Vincent Lecavalier and Martin St. Louis, at the same end of the court as the Raptors’ bench.

“They did a great job," Raptors guard Fred VanVleet said earlier this season.

The NBA is preparing to release the schedule for the second half of the season — mid-March through mid-May — later this month. The playoffs will run from mid-May through mid-July.