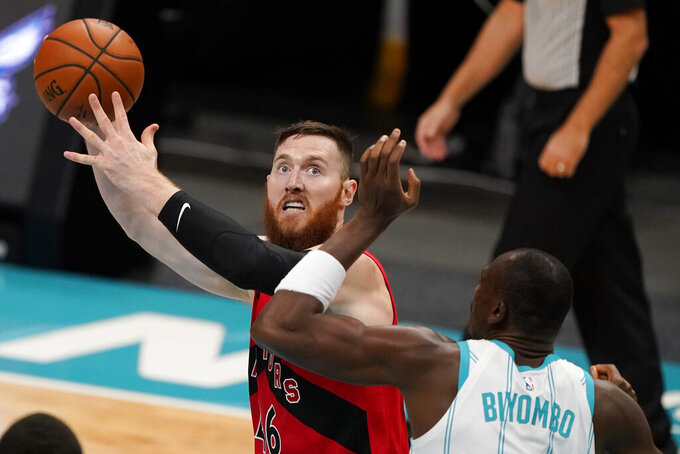 The Toronto Raptors aren’t in Toronto and might not be back there until next season. Marc Gasol and Serge Ibaka, key parts of the team that won the 2019 NBA title, left the Raptors as free agents during the offseason. And Kyle Lowry, the team’s undisputed leader, is closer to the end of his career than the beginning.

Fred VanVleet knows all this.

They are not the Tampa Raptors, they are the Toronto Raptors, and until proven otherwise the team believes that just because their location has temporarily changed because of the coronavirus pandemic — put simply, crossing the U.S.-Canada border is basically impossible for non-essential reasons these days — there’s no reason for them to not expect to be primed for a deep playoff run once again.

“We’re still dangerous and I knew that before the season started,” said VanVleet, who signed a four-year contract during the offseason and has gone from undrafted to someone now guaranteed to make more than $100 million in his NBA career. “I’m going to miss those guys that are not here, obviously, but we’ve got new guys that we’ve got to try to plug in and get them up to speed and continue to do what we do. Our tradition hasn’t left. Our character hasn’t left. Our foundation hasn’t left. So, we’ve just got to plug the new pieces in and see how it’s going to roll.”

Lowry and VanVleet play well together so the backcourt is fine, and the Raptors believe Pascal Siakam will continue on his path toward stardom. The additions of Aron Baynes and Alex Len will fill at least some of the gaps that Gasol and Ibaka’s departures created, and the Raptors are counting on more growth from OG Anunoby as well.

“It’s going to take some adapting and some changing along the way,” VanVleet said. “But every year, I’ll tell you guys the same thing. I like our chances and this year isn’t any different. It’ll just look different.”

Some other things to know about the Raptors going into the season:

There’s a chance the Raptors could return to Toronto for the second half of the season. But no matter what, they’re now guaranteed to go more than one full year without playing a game in Canada. The Raptors’ last five games preceding the coronavirus shutdown last season were on the road; their last game in Toronto was Feb. 28. They then played 19 games in the bubble and the NBA has this season’s schedule done for 37 games through March 4, 2021 — so the Raptors are on what technically is, at minimum, a 61-game run away from Toronto.

The Raptors are the only team to have reached 50 wins in each of the last five seasons; the 72-game schedule and temporary relocation will make extending that a challenge this season, but it should be noted that Toronto played exactly 72 games in the 2019-20 regular season and still went 53-19. More than half the league's teams — 16 of 30 — haven’t had even one 50-win season in the last five years.

Pascal Siakam freely admits that he didn’t enjoy the bubble experience, and it showed in his stats. In the pre-bubble portion of last season, Siakam averaged 23.6 points and 7.5 rebounds on 46% shooting from the field and 80% from the line. At Disney, Siakam’s numbers fell to 16.9 points and 6.8 rebounds on 39.5% shooting. The Raptors need pre-bubble Siakam back desperately this season, especially with Marc Gasol and Serge Ibaka no longer with the club.

Kyle Lowry enters this season 251 points shy of joining DeMar DeRozan and Chris Bosh as the only players to score 10,000 in a Toronto uniform; he’s 526 shy of catching Bosh for No. 2 on that list, and when he gets there he’ll be about 3,000 points away from DeRozan’s team mark. He’s entering his 15th season and turns 35 in March, but there’s no slowdown in his game yet; last season he became the 12th player in NBA history to average at least 19 points and be an All-Star in season No. 14 of a career.

It should be noted that Nick Nurse’s first two seasons as an NBA head coach have probably exceeded any expectation the Raptors had when they gave him the job. He’s a three-time coach of the month, the reigning coach of the year, and his record — including playoffs — is 134-55, a winning percentage of .709.