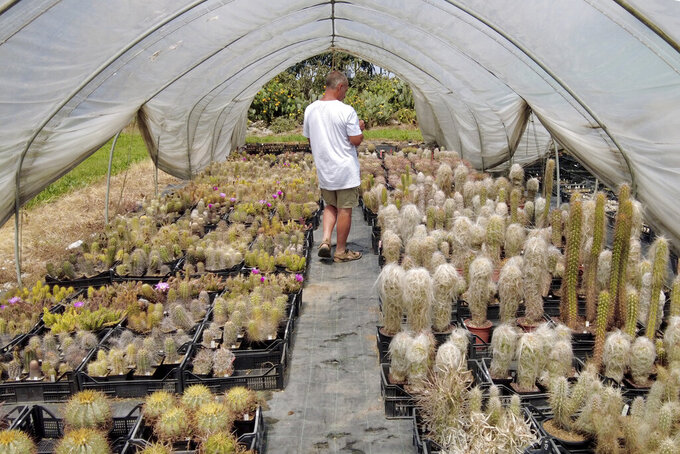 Andrea Cattabriga, President of the Association for Biodiversity and Conservation, walks amongst his homegrown rare cacti at his greenhouse in San Lazzaro di Savena, Italy, Saturday, June 5, 2021. Cattabriga, a top expect on rare cacti, was called by the Carabinieri Military Police in February 2020 as a consultant to examine thousands of cacti stolen from from the Atacama Desert in Chile, confiscated when police conducted a massive cactus bust at a greenhouse along the Adriatic Coast in Italy. (AP Photo/Trisha Thomas)

This February 2020 discovery became one of the largest known cactus busts and the catalyst for an international effort among cacti experts, police, conservationists and governments to return the plants to their native countries.

What Lt. Col Simone Cecchini and his team found in Senigallia, a town on central Italy's Adriatic coast, were hundreds of Copiapoa cinerea and Eriosyce cacti that had been uprooted from the desert. They also found the suspected trafficker’s passport, computer and other documents that helped them reconstruct his operation.

The suspect, an Italian in his 40s, had made seven trips to Chile, from where he sent boxes of cacti to Romania and Greece. They then were brought to Italy and sold to clients, mostly in Asia.

He reached out to Andrea Cattabriga, president of the Association for Biodiversity and Conservation, and asked him to examine the specimens to confirm they had plundered from the Chilean desert, which is considered the driest non-polar desert in the world. The region, west of the Andes Mountains, has been used by scientists as a site to simulate Mars expeditions.

In a small town on the outskirts of Bologna, Cattabriga has several greenhouses where he legally grows a wide variety of rare cacti from certified seeds. He then tries to recreate their natural habitat and uses cotton swabs for pollination. This has given him the ability to distinguish between those grown in greenhouses and others pulled out of the desert.

Cattabriga immediately contacted the International Union for Conservation of Nature (IUCN), which keeps a red list of endangered species around the globe. According to the IUCN, about one-third of 1,478 cacti species are classified as threatened.

Yet while there's international concern about the risk of extinction for rhinos, tigers or pandas, few people are aware or concerned about the possibility of a cactus species becoming extinct.

“I think part of it is because plants are everywhere. So we take them for granted,” said Barbara Goettsch, co-chair of the IUCN's cactus and succulent plants group. “In the specific case of cacti, these are more threatened with extinctions than birds or mammals.”

Cacti have become increasingly popular both as collectors’ items and as decorative house plants. In recent years, demand has been growing in China, Japan and Thailand.

Cattabriga and Cecchini decided the size of the seizure required an historic action: plants had to be returned to Chile.

“When a stolen work of art is recovered, it is returned,” said Cattabriga. “It had to be the same for these cacti.”

But sending them back was easier said than done. Shortly after the seizure, Italy went into lockdown due to the COVID-19 pandemic. The confiscated cacti were moved to a greenhouse at the Botanical Garden at the University of Milan. Then they launched a year-long effort to cut through red tape and find the funds for the transfer.

In Chile, Pablo Guerrero of the Botanical Department at the University of Concepcion began organizing with the Chile’s National Forestry Corporation (CONAF) to receive the plants.

Finally, over a year after the cacti were discovered, the recovery plan fell into place. Cattabriga joined officers from Cecchini’s wildlife team wrapping up 844 plants to be sent back to Chile. Of those confiscated from the suspected trafficker, 107 had died.

On April 18, 2021, the plants arrived at the airport in Santiago and were taken to a special quarantine center on the outskirts of the Chilean capital. They will remain there until August.

Their future is still uncertain. Politicians are pushing for them to be returned to the Atacama Desert. But Guerrero is concerned that the plants may not survive that direct planting. He is pushing for a special botanical garden in the Coquimbo region where their natural habitat can be reproduced.

Meanwhile, the suspected trafficker and an accomplice have been charged and will face trial in Ancona, Italy. He declined to speak to The Associated Press. Cecchini also said people who collaborated with the suspect have been put into a Europol database and will be monitored.

“Most people in Chile do not think we have species poaching. They think poaching is about rhinoceros or elephants very far away. They are not aware that it is right here with our cacti,” said Guerrero.