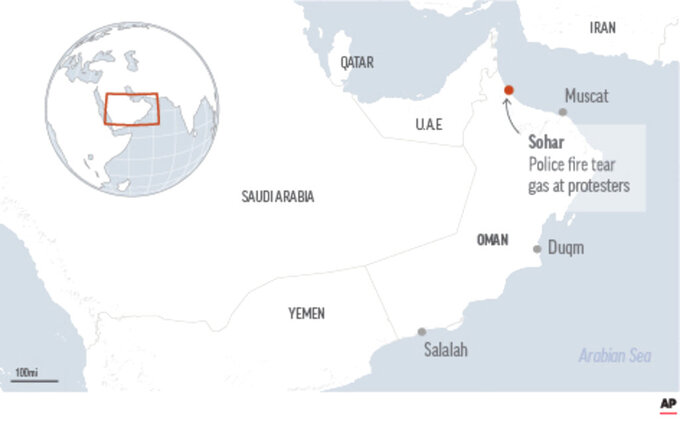 Map locates protests. Scattered protests in Oman over layoffs and poor economic conditions have drawn a massive police presence in at least one city in the sultanate.

Videos posted to social media show several dozen Omanis in the city of Sohar trailed by a long line of riot police vehicles. Other images appear to show a line of dozens of officers in riot gear near a government labor office in the city, some 200 kilometers (125 miles) northwest of the capital, Muscat.

Other images appear to show Omanis fleeing smoking tear gas canisters and others being arrested by nightstick-wielding riot police. The images correspond to known landmarks around Sohar, the first major city people enter in the sultanate after crossing the border from neighboring United Arab Emirates.

Other videos showed demonstrators in Salalah, a city some 850 kilometers (525 miles) southwest of Muscat.

Similar scattered protests in Sohar on Sunday also brought a mass police presence, activists said online. That demonstration was acknowledged by Oman's Labor Ministry in a tweet, which said it was aware of people gathering there to try to “find new job vacancies and to solve the problems of those who were fired.”

It was not immediately clear if there had been a major layoff in Sohar, which is home to a key port, as well as plants producing aluminum and steel. In 2011 during the Arab Spring, protesters in Sohar demanding higher pay, jobs for the unemployed and the sacking of government ministers set fire to a supermarket.

Oil and gas remains a major industry in Oman. Its tourism sector has been hard hit by the coronavirus pandemic and repeated lockdowns in the sultanate.

Oman's state TV on Monday afternoon acknowledged that jobless people had been coming to Labor Ministry offices to “expedite the treatment of their conditions." It also showed an image from one of the peaceful protests.

The Royal Oman Police did not acknowledge making any arrests. Oman's Information Ministry and the Omani Embassy in Washington did not respond to requests for comment.

The demonstrations mark the first major unrest for Sultan Haitham bin Tariq, who took over in January 2020 after the death of the long-ruling Sultan Qaboos bin Said. State media on Monday referred to employment as “among the most important priorities” of Sultan Haitham.

Oman faces billions in looming loan repayments, including from China, and needs even more money as its youthful population wants jobs and its government cannot afford the cradle-to-grave benefits given in other Gulf Arab nations.