Rashford back to the day job after activism during pandemic 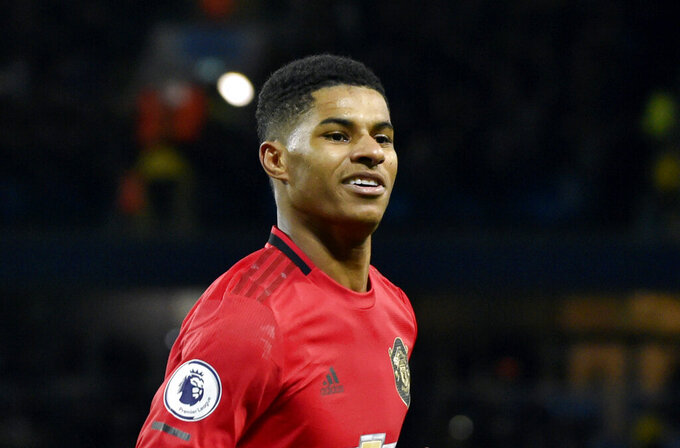 He used his profile to help raise $25 million for charity, shame the British government over its policy for school lunches, and become one of the most popular and admired people in the country during the coronavirus pandemic.

As an activist, Marcus Rashford achieved so many of his goals over the last three months.

Now it’s time to score them on the soccer field.

“My day job,” the Manchester United striker tweeted this week alongside a picture of him at practice at the team’s training facility.

First-choice striker, leading goalscorer, now undoubtedly a leader in the eyes of his manager at United.

“We as a club are immensely proud of him,” Ole Gunnar Solskjaer said about the 22-year-old Rashford in a video call on Thursday. “He is not only a top footballer but also a fantastic human being.

Solskjaer spoke at length about the personality and drive Rashford has shown during lockdown, firstly in helping to raise 20 million pounds ($25 million) for the Fareshare UK charity supplying meals to families in need and then in forcing the government to reverse its decision to halt school lunch vouchers for poor students over the summer holidays.

They are qualities the United manager sees in Rashford the soccer player, too, having already made him his No. 1 striker during his 18 months in charge despite some calls for the club to sign a more experienced and established striker to lead the line.

Rashford has a team-high 14 goals in the Premier League this season, but hasn’t been seen in the famous red jersey since Jan. 15, when he hobbled off the field at Old Trafford during an FA Cup replay against Wolverhampton, holding his back.

He sustained a double stress fracture, the result of a gruelling schedule which saw him play virtually every game for United whether it was in the league, the cups or in European competition. Rashford was still in recovery in mid-March when the league was suspended because of the coronavirus.

Rashford likely would have missed the rest of the season, but the three-month hiatus means United has its leading striker back for the run-in, which starts on Friday with an away game at Tottenham.

“He has changed the lives of so many kids this summer,” Solskjaer said, “which is more important than any game of football he will probably play. So hopefully he can keep up both sides (of his life) as well as he is doing now.”

With Paul Pogba also back fit after injury, Solskjaer has enviable attacking options for the remainder of the season, but also some dilemmas.

Can Pogba and playmaker Bruno Fernandes, who has excelled since joining from Sporting Lisbon in January, play together in midfield? Who out of Rashford and Anthony Martial will start as the central striker, and which of them will be on the left wing? Where does highly rated teenage striker Mason Greenwood fit in?

Solskjaer has had two in-house 11 vs. 11 matches, as well as a friendly against West Bromwich Albion, to check on his players’ fitness and sharpness after lockdown.

United went into the break as one of the league’s form teams, with its 2-0 derby win over Manchester City days before the suspension arguably its best team performance of the season. It left United three points behind Chelsea in fifth place, which could yet secure Champions League qualification in light of City’s two-year ban from European competition that is currently under appeal.

United also has a very appealing set of fixtures over the next six weeks, including those against four of the bottom six in a six-game run from June 30 to July 18.

A victory at eighth-placed Tottenham, managed by former United manager Jose Mourinho and one of the team's main rivals for a Champions League berth, would be the perfect start.