Raw feelings abound as Senate turns back to Russia probe 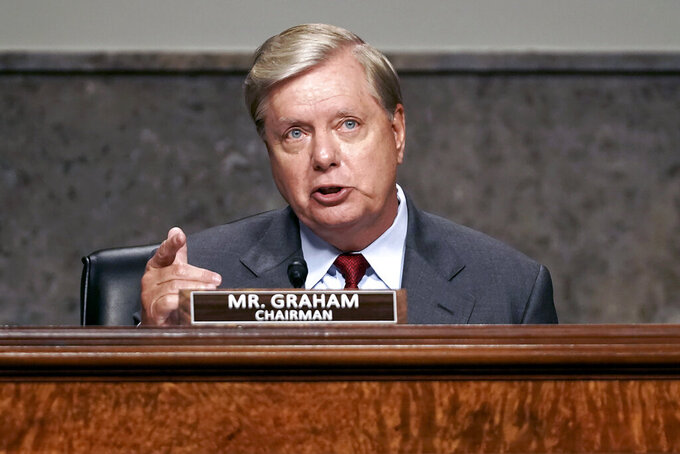 WASHINGTON (AP) — Two Republican-led Senate committees have launched election-year investigations into the Justice Department’s Russia probe, resurrecting the issue at the urging of President Donald Trump while reigniting the partisan hostility that comes along with it.

In two committee rooms Thursday, tensions boiled as lawmakers considered a raft of subpoenas for current and former Justice Department officials. With the country suffering through civil unrest over police brutality, mass unemployment and the coronavirus pandemic, Democrats and even some Republicans questioned whether looking back at the Russia investigations — now dating back more than three years — should be a top priority.

Senate Judiciary Chairman Lindsey Graham of South Carolina was defiant, angrily stating that there are people “who are real good candidates for going to jail" in the Justice Department. Rhode Island Democrat Sen. Sheldon Whitehouse countered that he was concerned that the panel was turning into “political errand boys” for Trump’s reelection.

As the senators bickered, Sen. Ben Sasse, R-Neb., burst out that “it’s bullshit the way people grandstand for cameras in here” and “some of us have other work to do.”

Graham shot back: “If you’ve got to go somewhere else, go.” He later postponed the vote on more than 50 subpoenas, saying he would give people more time to talk.

In a Senate office building next door, the Senate Homeland Security and Governmental Affairs Committee approved its own slate of three dozen subpoenas related to the Russia probe over strong Democratic objections. The panel’s top Democrat, Michigan Sen. Gary Peters, dismissed it as an election-year defense of Trump.

But while all Republicans on the panel voted to authorize the subpoena authority, two urged the committee’s chairman, Wisconsin Sen. Ron Johnson, to change course.

Speaking on the committee’s investigation, Sen. Mitt Romney, R-Utah, told Johnson that “I continue to be concerned that this is politically motivated” even as he voted to move ahead.

“The committee’s inquiry is not entirely without basis, but as you know, I believe there are far more urgent priorities that the committee should address, particularly given the trauma in our country from COVID-19, the shattered economy, widespread protests against systemic racism, foreign cyberattacks — and the list goes on and on,” Romney said.

Sen. Rob Portman, R-Ohio, said he hopes the subpoenas won’t actually be issued, given the similar investigations underway and “all of the other things we have on our plate right now.”

Graham and Johnson, both close allies of the president, announced their sweeping probes in recent weeks as Trump faced criticism on his handling of the coronavirus outbreak. The president has continued to rail against the Russia probe, which he calls a hoax.

Former special counsel Robert Mueller effectively brought the Russia investigation to a close with a report issued in April 2019 that detailed multiple contacts between Trump’s 2016 campaign and Russia and concluded that Russia interfered in the presidential election. But he found insufficient evidence to establish a criminal conspiracy between the campaign and Russia.

Months later, an internal department report found multiple errors and key omissions in the applications the FBI submitted to conduct surveillance on a former Trump campaign aide in the early months of the investigation. That's where Republicans have turned their attention, launching investigations to find out what went wrong and whether Justice Department officials conspired against Trump.

“You think I’m in Trump’s pocket. I get all that,” Graham said to the Democrats. “It’s not lost on me what you think. And I’m sad because I like you all. But to expect me to punt? Forget it. We’re not going to punt, we’re not going to have a rule of law for Republicans, and a rule of law for Democrats, where it’s okay to turn the Republican nominee’s life upside down.”

Graham’s committee is focusing on the origins of the probe during the 2016 election, much of it before it was turned over to Mueller. Johnson’s panel, meanwhile, is looking at a list of Obama administration officials who Republicans say may have learned the identity of Michael Flynn, Trump's incoming national security adviser, from intelligence reports in 2016 and 2017. Among the names on that list is Trump’s Democratic opponent, Joe Biden, who was vice president when the Russia probe began.

Requests to “unmask” names in intelligence reports are routine, including during the Trump administration, which has requested them thousands of times.

The Judiciary panel, meanwhile, kicked off its Russia investigation on Wednesday by grilling former Deputy Attorney General Rod Rosenstein, who told lawmakers that he would not have approved an FBI surveillance application for former Trump campaign aide Carter Page had he known at the time about the problems it contained.

The comments were a striking concession that law enforcement officials made mistakes during the probe, though Rosenstein strongly defended Mueller and his conclusions.

“I do not consider the investigation to be corrupt, senator, but I certainly understand the president’s frustration given the outcome, which was in fact that there was no evidence of conspiracy between Trump campaign advisers and Russians,” Rosenstein said.