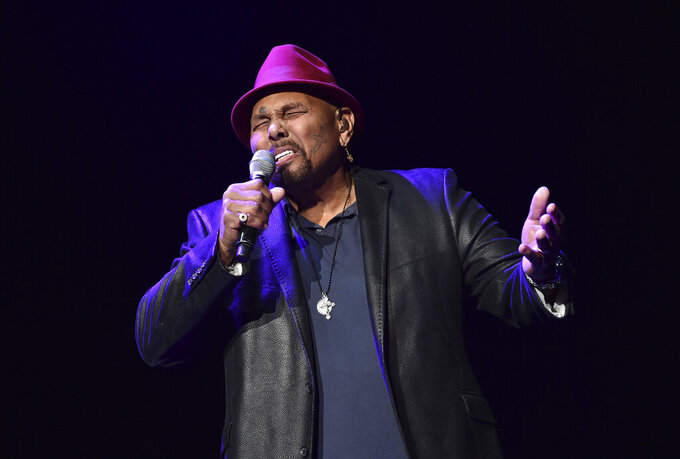 FILE - In this Saturday, Jan. 6, 2018 file photo, Singer Aaron Neville performs during A Concert For Island Relief at Radio City Music Hall in New York. Fans of the sweet, melodic sounds of New Orleans’ legendary vocalist Aaron Neville won’t have many opportunities to hear him live from now on. In posts Tuesday, May 4, 2021 on his official website and via social media, Neville announced his official retirement from touring.(Photo by Evan Agostini/Invision/AP)

NEW ORLEANS (AP) — Fans of the sweet, melodic sounds of New Orleans' legendary vocalist Aaron Neville won't have many opportunities to hear him live from now on.

In posts Thursday on his official website and via social media, Neville announced his official retirement from touring.

"The time has come for me to stop ripping and running on the road," Neville wrote. “I waited for someone to invent a way to beam me from show to show but no such luck. ... Unfortunately, the grueling nature of travel and the schedule needed to make a tour work has become less than desirable. The current climate of our world brought me many realizations. Life is short and I’d like to spend my remaining time on this earth being less hurried."

Still, Neville said his love for singing has not waned.

“It provides so much joy for me, at least as much as for those listening, if not more,” he said.

“Don't see this as a permanent goodbye, by the grace of God, I will keep making more music and may show up at a special event or concert down the road,” he promises.

Neville hasn't performed live since March 2020, when the coronavirus pandemic caused concerts to come to an abrupt halt in the U.S. Instead, he has livestreamed solo performances from Freville Farm, the 12-acre home in upstate New York where he and his wife, photographer Sarah A. Friedman, have lived since 2013.

The virus is of great concern to Neville, whose old age and asthma makes him especially at risk of developing a severe case of COVID-19.

“I don't want to get sick,” Neville said in an article last year written for AARP. “So, I canceled my tour dates and we've been home and isolated on our farm in New York.”

Neville's solo career flourished after the 1966 release of “Tell It Like It Is” and a later collaboration with Linda Ronstadt on “Don't Know Much” and “All My Life.”

He also garnered much of his fame from his work with the Neville Brothers, an R&B, funk and soul group that was based in his hometown of New Orleans and also consisted of his brothers Art, Charles and Cyril.

The group, which formally disbanded in 2012, was known for closing out the New Orleans Jazz and Heritage Festival's two-weekend run each spring.