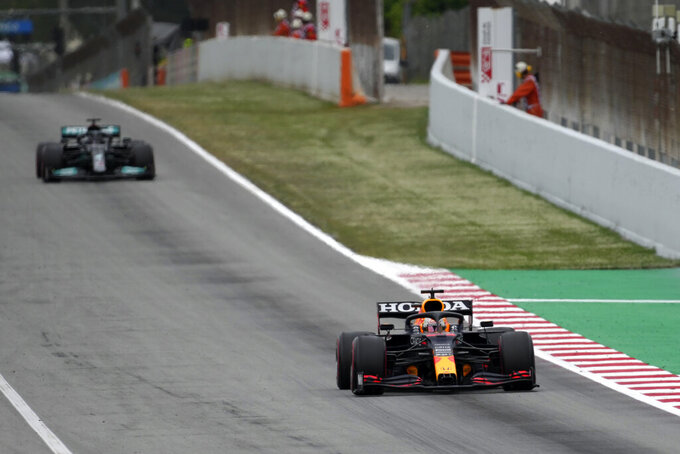 MADRID (AP) — After coming up short again on Sunday, Red Bull wants to find more race pace to keep contending with Mercedes for the Formula One title.

Red Bull driver Max Verstappen had another promising start to the weekend at the Spanish Grand Prix, but again it was Mercedes and Lewis Hamilton celebrating the victory on raceday.

It was a similar outcome to the previous race, with Red Bull looking closer than ever to Mercedes but not being able to finish in front.

“It’s been like this a little bit so far this year, where it seems like qualifying we are quite competitive, and in the race struggling a bit more,” Verstappen said. “We just need a faster car, it’s very simple, then you don’t need to get into a situation like that, and that’s what we’ve got to focus on.”

Hamilton’s win in Barcelona was his third in four races this season, with Verstappen’s lone victory coming in Italy in the championship's second race. Hamilton also won in Portugal and at the season-opener in Bahrain, when Verstappen started from pole position.

In Barcelona, Verstappen jumped into the lead from second on the grid at the start but wasn’t fast enough to hold on. Hamilton benefited from Mercedes' two-stop strategy to make a pass for the lead near the end of the race.

“I think on pace it very much swings in Red Bull’s favor on Saturday, probably on Sunday towards us,” Mercedes team principal Toto Wolff said. “Our car seems to be good on the tires.”

Wolff said the two-pit strategy, which gave Hamilton fresher tires and allowed him to easily make up for the time lost in the pits, was executed perfectly by the team.

“They are just fantastic and the mathematicians and strategists coming up with all the simulations,” he said. “In our plan, if we had to stop now, we would end up catching him one lap to the end, and we would have a tire differential of 1.4 seconds, and we believed that it is enough and we trust them and we trust the data.”

Red Bull could have potentially brought in Verstappen for a second pitstop but the team felt it wouldn't have made a difference.

“I think if we would have, let’s say, gone for that earlier second stop, I don’t think I would have caught Lewis up after that,” Verstappen said. “I think I was a bit slower.”

Hamilton, who earned his 100th pole position on Saturday, stayed close to Verstappen throughout the race and finally made the pass for the lead with six laps to go.

"It was a long way to come back from, 20-odd seconds back. But it was a good gamble,” Hamilton said.

The victory allowed Hamilton to increase his lead from eight to 14 points in the drivers’ championship.

Mercedes’ lead in the constructors’ championship was up to 29 points after Hamilton’s teammate Valtteri Bottas finished third on Sunday for his third podium-finish this season. Red Bull’s Sergio Pérez is yet to finish in the top three.

The next race is in two weeks in Monaco, where Red Bull has historically done well. It won there with Daniel Ricciardo in 2018. Verstappen hasn't fared well on the street circuit, though, with his best finish a fourth place in 2019.

Hamilton is a three-time winner at the Monaco GP, which was canceled last season because of the coronavirus pandemic.