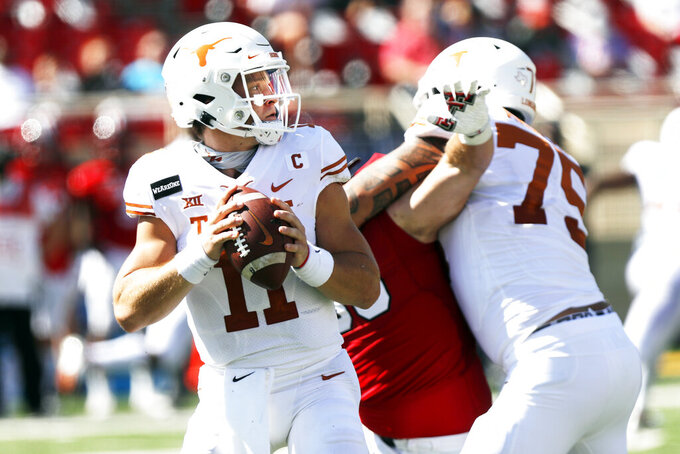 FILE - In this Saturday Sept. 26, 2020, file photo, Texas quarterback Sam Ehlinger looks for an open receiver during the first half of an NCAA college football game against Texas Tech in Lubbock, Texas. No. 22 Texas vs. Oklahoma, at Cotton Bowl Stadium, Dallas. There is no State Fair of Texas this year because of the pandemic and both teams are coming off a loss, but this is still the Red River rivalry. (AP Photo/Mark Rogers, File)

Some things to watch in the Big 12 on the second Saturday of October, when there are only three conference games and four teams have an open date:

No. 22 Texas vs. Oklahoma, at Cotton Bowl Stadium, Dallas. There is no State Fair of Texas this year because of the pandemic and both teams are coming off a loss, but this is still the Red River rivalry. The five-time defending Big 12 champions Sooners are 0-2 in league play (losses to Kansas State and Iowa State) for the first time since 1988. They are unranked for the first time in Lincoln Riley's four seasons as head coach, and are not ranked playing Texas for the first time since 2005. The Longhorns, coming off a 33-31 home loss to TCU, are the only Big 12 program with a winning record against the Sooners. But Oklahoma has won eight of the last 11 against Texas, including the Big 12 title game in 2018.

Old vs. young, with fourth-year Texas starting quarterback Sam Ehlinger against Oklahoma freshman Spencer Rattler, the league's top two passers. Ehlinger has thrown for 924 yards with 14 touchdowns and two interceptions, while Rattler has 982 yards with 10 TDs and four picks.

Sophomore Breece Hall is the first running back for No. 24 Iowa State to start the season with three consecutive 100-yard rushing games since 2001. ... Four teams have open dates: No. 10 Oklahoma State, Baylor, Kansas and West Virginia. They all play Oct. 17, when the rest of the Big 12 teams will get that weekend off. ... Kansas State, which plays at TCU, is 2-0 in the Big 12 for the first time since 2014. ... Oklahoma has scored at least 28 points in 55 consecutive games, a school record and well ahead of the Ohio State's 17 in a row that is the next-longest active FBS streak.

A shutout in the Big 12 this weekend. TCU, which is home against Kansas State, has scored in 347 consecutive games since 1991, the nation's second-longest active streak, while Texas Tech and Oklahoma haven't been shut out since 1998. The six league teams playing Saturday combine to average 37 points a game while allowing 32.

TCU junior safety La'Kendrick Van Zandt had seven tackles, an interception and a game-saving tackle against Texas. That was a week after his 24-yard touchdown in TCU's opener on what counted as a fumble recovery when he picked off a backward pass.