Red wine or white? At Olympic hotel, it comes in hazmat suit 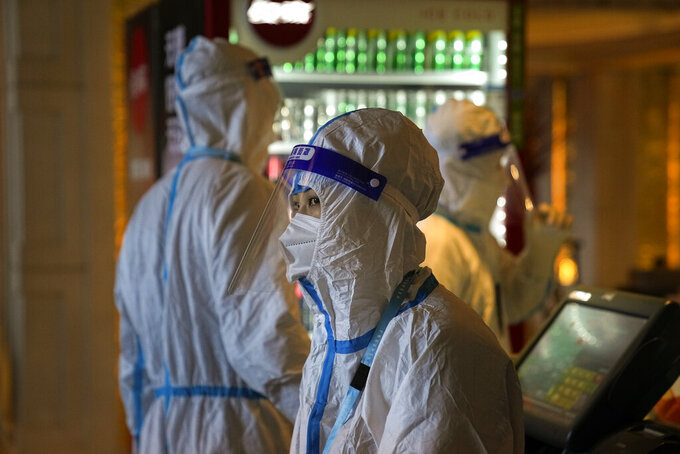 Three hotel workers in protective gear stand next to a checkout stand at the Shangri-La Hotel at the 2022 Winter Olympics, Wednesday, Feb. 16, 2022, in Beijing. (AP Photo/Jae C. Hong)

BEIJING (AP) — The Chinese people working in hazmat suits inside the Beijing Olympics' closed-loop “bubble” don’t hesitate to be photographed. In fact, they seem to welcome it, showing pride in carrying out a national mission of controlling COVID-19.

Everyone seems approachable. The scenes are incongruous to outsiders who are enjoying an evening meal of Beijing’s renowned roasted duck.

Everyday pleasures like a cup of coffee or a glass of wine turn exotic when the server arrives, seeming to have landed from the set of a disaster movie.

The industrial-like focus on safety and sanitation contrasts markedly with the opulence of the hotel with its massive chandeliers and displays of Chinese art hanging above overstuffed sofas and lounge chairs.

Apparently it takes only a few minutes to put on the suits, and none of the wearers seems the least bit uncomfortable in the safety gear. Several staff members said they are not supposed to speak to reporters, and they were good to their word.

But they all offered thumps-up signs when approached, and one flashed five fingers when asked how long it took to put on the suit.

A woman in a hazmat suit watching curling on a large television screen had this to say when she was asked if she understood the rules: “No.”

Asked why she was watching, she laughed and replied: “China is playing.”