Redskins draft pick from Liberty says he had coronavirus 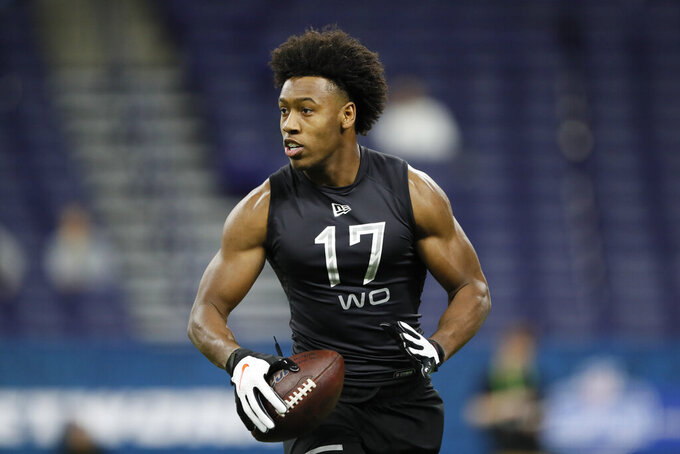 FILE - In this Feb. 27, 2020, file photo, Liberty wide receiver Antonio Gandy-Golden runs a drill at the NFL football scouting combine in Indianapolis. The Washington Redskins selected Gandy-Golden in the fourth round of the NFL Draft. Gandy-Golden says he tested positive for the new coronavirus in March and was fully recovered by early April. He says his symptoms were mild and he feels 100% now and is ready to get on the field. (AP Photo/Charlie Neibergall, File)

Gandy-Golden said in a statement that he tested positive during NFL draft training on March 24, had mild symptoms and was cleared on April 7.

“I self-quarantined for two weeks and followed all guidelines from health experts,” he said. “I feel 100% now and can’t wait to get on the field with the Redskins.”

Gandy-Golden played the past two seasons at Liberty University in Lynchburg, Virginia, which reopened in March despite the COVID-19 pandemic. Jerry Falwell Jr., president of the evangelical school, appeared to reference Gandy-Golden during a Fox News appearance on Wednesday.

“Even the one student who was an online student who never was on campus who tested positive, it turns out he quit school to go into the NFL draft back early in March even though he was online, but somehow that got press,” Falwell said. “That was crazy.”

Liberty spokesman Scott Lamb responded to an email inquiry about Gandy-Golden's diagnosis and Falwell's comments with a paragraph from the school's website that does not specifically mention the former football player. The site makes reference to a graduated student who tested positive for the coronavirus on March 24 but was not on campus during the two weeks prior.

"Prior information that the graduated student came to an on campus clinic was incorrect," it said. “While the student lives in Lynchburg with family, the location of infection cannot be pinpointed, in part, because the graduated student traveled to Florida on business in the two-week period before the test.”

A Redskins spokesman said the team was unable to comment on Gandy-Golden's medical situation.

“First things first, you definitely want him to be safe,” Redskins defensive lineman Jonathan Allen said on a video call with reporters. “Moving forward, I have full faith in our medical staff. It’s really what they determine, what the NFL determines, is safe for us to move forward with. ... You just pray for the players we do have and just do everything you can to take the precaution to be safe.”

Washington selected Gandy-Golden in the fourth round of the draft last month, 142nd overall. He was not asked about his health during a conference call with reporters on April 25.