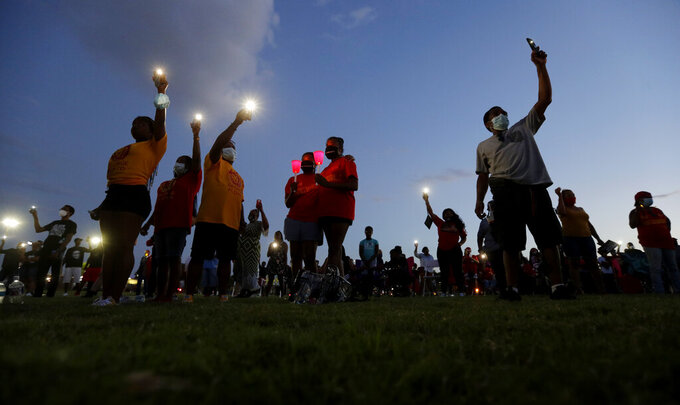 FILE - In this Monday, June 8, 2020, file photo, local residents and alumni of Jack Yates High School take part in a candlelight vigil to honor George Floyd, in Houston. Floyd died after being restrained by Minneapolis Police officers on May 25. As the trial surrounding the death of Floyd begins in Minneapolis, a sweeping package of police reforms in his native Texas has scarce signs of early support within the state’s GOP majority. The “George Floyd Act” was scheduled to get its first hearing in the Texas Capitol on Thursday, March 25, 2021. (AP Photo/Eric Gay, File)

AUSTIN, Texas (AP) — Outside of George Floyd's public memorial last summer in Texas, Republican Gov. Greg Abbott floated the possibility of a law named in honor of the longtime Houston resident that would take aim at police brutality.

But nine months later, as a former Minneapolis police officer charged in Floyd's death is set to stand trial next week and a George Floyd Act is heard in the Texas Capitol for the first time Thursday, there are scarce early signs of GOP support for the package of sweeping police reforms introduced by Democrats, including from Abbott.

It reflects the challenges facing the efforts in Texas, where Floyd, who was Black, was laid to rest following his death in May after Derek Chauvin, who is white, pressed his knee against his neck for about nine minutes while he was handcuffed and pleading that he couldn’t breathe. Chauvin is charged with murder and manslaughter in a trial that begins Monday in Minneapolis.

Members of Floyd's family are expected to testify in Texas, as is the sister of a second Black man, Javier Ambler, who also died in police custody and was heard saying on body camera video that he was having trouble breathing while being detained by sheriff's deputies near Austin.

“I think the governor's reading the tea leaves to see where the other members of the Republican caucus are,” said Democratic state Rep. Ron Reynolds, the vice chairman of the Texas Legislative Black Caucus.

Provisions of the bill include banning chokeholds and requiring officers to intervene if another officer is using excessive force.

Reynolds said their caucus has had ongoing discussions with Abbott's staff, who he described as not making any commitments but also not closing the door.

Abbott, who on Thursday is scheduled to be at the Texas border for an event about COVID-19 vaccines, privately met with Floyd's family in Houston last summer. He said at the time he was committed to working with them to “ensure we never have anything like this ever occur in the state of Texas.”

His office did not return requests for comment Wednesday.

When it comes to law enforcement, Abbott has made clear his top priority this year is preserving funding levels for police departments, echoing Republicans who have seized on calls by some activists and progressives to “defund the police” to argue that supporters were intent on slashing police force budgets. Supporters of the movement to “defund the police” say they actually want the government to spend more on housing and education than policing.

Earlier this month in Congress, House Democrats passed the most ambitious effort in decades to overhaul policing nationwide under the George Floyd Justice in Policing Act. Like the legislation in Texas, the bill would ban chokeholds and address so-called qualified immunity that shields law enforcement from certain lawsuits. It would also create national standards for policing in a bid to bolster accountability.

Democrats now control both chambers of Congress, but it seems unlikely the bill could pass the Senate without substantial changes to win GOP support. In Texas, Reynolds acknowledged that changes are likely coming to their legislation in order to win bipartisan support in the GOP-controlled statehouse.

Republican Rep. James White, who chairs the House Committee on Homeland Security and Public Safety, would only say he supports “constitutional policing” when asked whether he backs any elements of the bill. He quickly added that measures need to support law enforcement.

“Without law enforcement, our laws aren't worth the ink or the paper that's being used to convey them to the public," he said.

Four years ago, Abbott signed the Sandra Bland Act named after a black woman found dead in a Texas jail in 2015 following a confrontational traffic stop with a white state trooper. The compromise that reached his desk added de-escalation training and independent investigations of county jail deaths, but the end product disappointed Bland’s family, who felt it didn’t address the circumstances leading up to her death.