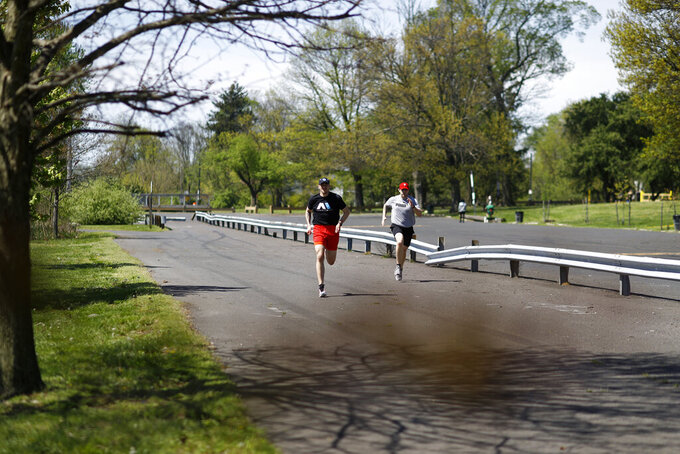 Fighter Kyle Daukaus, left, sprints with his brother and training partner, Chris Daukaus, through Pleasant Hill Park near their home, Saturday, May 2, 2020, in Philadelphia. Kyle, a rising star in the regional MMA promotion Cage Fury Fighting Championships, is still chasing his dream of getting the call to fight for UFC despite the coronavirus pandemic. (AP Photo/Matt Slocum)

PHILADELPHIA (AP) — Kyle Daukaus could use a job. The Philadelphia native seeks manual labor work to earn money while on a break from the kind of profession not often noted on LinkedIn: the undefeated middleweight champion of regional MMA promotion Cage Fury Fighting Championships.

“As far as fighting,” Daukaus said, “I can’t do anything.”

Outside of UFC, the mixed martial arts world has largely shut down, leaving thousands of prospects like the 27-year-old Daukaus out of work and with little idea when the cage door will open again.

There’s nowhere to fight -- the regional scene has vanished during the coronavirus pandemic -- and their gyms are shuttered. So Daukaus does what he can, taking to a nearby park for sprints on empty parking lots and pounding pads with his brother in the garage of his Philly home. Far from the millions top MMA fighters earn with each massive pay-per-view fight, Daukaus is paid by CFFC almost on commission -- the more tickets he sells to friends and family for one of his fight nights, the more cash he can earn.

And in this climate, there’s nothing to sell.

Cage Fury has postponed its scheduled cards, as have most of the larger MMA promotions such as Bellator, One Championship and the Professional Fighters League.

The promotional drought has left fighters scurrying for a nibble of whatever open preliminary bouts might be available on a UFC card.

Hector Castro, a fight manager with Empire Sports Management, said UFC has tightened the ship on which outliers are offered deals. But his phone is buzzing from the pleas of his stable of roughly 20 fighters who crave a fight with any promotion.

“Everybody wants to get in there," he said. "But the major issue is, they want to be smart about it. They understand this is how they make a living. But a lot of them also see the opportunity.”

Daukaus is among the fighters looking to seize the moment. He fought on the UFC “Contender Series” and nearly scored a contract with the company. There’s a chance he could earn another crack at UFC if he lands a spot on the next “Contender” if it goes through with a summer taping.

“He texts me almost every other day, ‘Hey, tell (UFC) I’m ready,’” Castro said. “Tell the Bellator guys, ‘Hey, I want this guy.’ I’m like, listen, bro. It’s quiet right now. There’s nothing going on. Let’s hope we can get back to work and these guys can make a living. The longer we go, the longer the line goes. You’re only allowed 12 fights, 15 fights a card. You’re at the bottom of the totem pole.”

With no money stream, fighters are more willing than ever to gamble with their health and fight during the outbreak.

“Will they risk getting sick? I’m sure 90% would,” Castro said. “The mentally strong are going to survive this.”

Daukaus normally trained twice daily with jiu-jitsu sessions in the morning and practicing other mixed martial arts skills at night. He taught kickboxing classes at a Philly gym and worked out with a strength and conditioning coach in New Jersey. He now relies on weights in his basement and shadow boxing to stay fit, mixing in the occasional sparring sessions with his older brother, a fellow MMA fighter and Philadelphia police officer.

Daukaus was trained by former Bellator fighter Will Martinez, who opened his Brazilian jiu-jitsu school nearly 10 years ago in Philadelphia. He shut the doors in mid-March and his empty gym has become another casualty of the pandemic.

“Ten years may be going down the drain,” Martinez said. “How many schools and places like us are in the same predicament? I can’t really dwell on it. I’ve got to sit back and wait.”

Martinez suspended the accounts of nearly 200 members and wonders how his 3,700-square-foot gym could survive even if it opens under a new era of social distancing.

“Mentally, physically, financially, emotionally, it’s terrible,” he said. “Jiu-jitsu is in a real terrible predicament because we’re not like other gyms where people can keep social distancing and keep six feet apart because they have a 30,000-square-foot facility. We can’t do that. So what do we do? There’s no timeframe to our return.”

Daukaus is 9-0 since he turned pro in 2017 and last fought in early February at a casino. He’s generally paid when he weighs in and earns more if he wins his fight, dollar figures nudged higher if ticket sale incentives are met, and a drop in the spit bucket compared to the millions raked in by PPV stars Khabib Nurmagomedov or Conor McGregor.

“It’s a big deal when I have fights here locally, which is good because I have a lot of people coming so I get that extra money,” Daukaus said.

Daukaus is an independent contractor. Unlike pros in the NBA or NHL, two leagues interrupted by the COVID-19 pandemic whose players are getting most or all of their regular-season paycheck, Daukaus doesn’t receive a salary and lives at home with his mother, a nurse practitioner with Temple University Hospital.

“I hear about how bad it is at her work,” Daukaus said. “But for me, it’s very tough not having any income. I know that fighting as a profession is a struggle in the beginning, and I’m fine with struggling like that. But I’m not even guaranteed monthly payments from the gym right now. I’m doing as best as I can to spend as minimal an amount as possible.”

Daukaus had hoped to fight again this month. Instead, he trains at home for a fight that might not happen this year.

“I don’t have a Plan B,” Daukaus said. “If the opportunity comes and I get a call, I’m going to take it.”