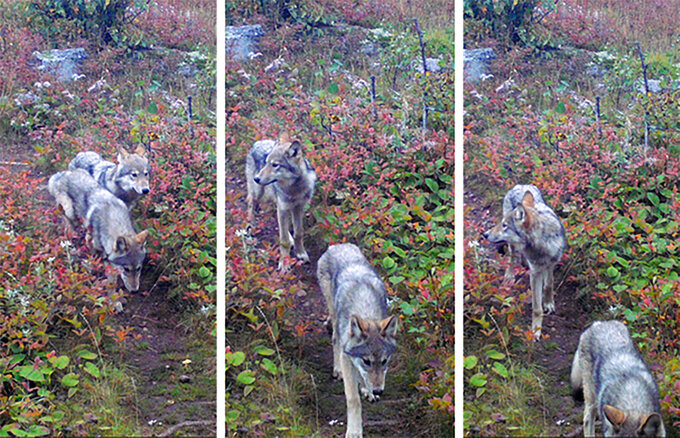 They've also achieved a primary goal of the reintroduction initiative by reducing the park's moose herd, which has become too big for its own good, researchers with Michigan Technological University said.

“They're having no trouble finding and preying on moose, and that's really significant,” said wildlife ecologist Rolf Peterson, who has spent decades studying the relationship between the two species on the Lake Superior island chain. “The signs are all positive, I think.”

Data from radio-transmission collars worn by transplanted wolves and images from remote cameras suggest pups were born the past two years, although the number is uncertain, researchers with the park and State University of New York said.

Wolves are believed to have made their way to Isle Royale by crossing ice bridges from Minnesota or the Canadian province of Ontario in the mid-20th century. After becoming established, their numbers averaged in the 20s before declining sharply in the past decade, primarily due to inbreeding.

The National Park Service announced plans in 2018 to restore the population, which had fallen to two. Crews took 19 wolves from Minnesota, Ontario and Michigan's Upper Peninsula to the island in a series of airlifts. Some have died and at least one wandered back to the mainland.

A report released Monday by the Michigan Tech research team, which tallied live wolves during low-altitude flights last winter, said 12 had been spotted. Two others that had been seen previously were unaccounted for, meaning the population could be as high as 14.

Researchers counted 15 live wolves in 2019, when the first pup was believed to have been born to the new arrivals. It may have been conceived before its mother was taken to the island, Peterson said.

In a separate report, the park service and SUNY scientists said images from remote cameras on Isle Royale in 2019 indicated a female wolf relocated from Michipicoten Island, Ontario, had likely given birth to at least two pups. Pup-sized scats were collected from two sites this summer, and pup-sized tracks were spotted. Genetic analysis of the scats may help determine how many have been born on the island.

Four social groups appeared to be taking shape, displaying signs of courtship and willingness to mate, although they weren't sufficiently structured to be considered packs, the Michigan Tech report said.

Two have staked out territories on opposite halves of the 45-mile-long (70-kilometer-long) park's main island, while the others were trying to establish secure areas to wander and hunt, spending considerable time on smaller islands.

“The wolf situation on Isle Royale remains dynamic as these wolves continue to work out their relationships with one another,” said Mark Romanski, a park service biologist coordinating the introduction program. “It is expected that social organization ought to settle down, but then again, wolves don't always abide by human expectations.”

The plan calls for 20 to 30 wolves to be taken to Isle Royale over three to five years, but the coronavirus pandemic has put additional relocations on hold, spokeswoman Liz Valencia said.

The Michigan Tech team's moose census, also based on aerial observations, estimated the population at 1,876. That is 9% smaller than the 2019 count of 2,020 animals, which scientists now say might have been too high.

Either way, it appears the wolves' presence has halted a boom that saw moose numbers jump by about 19% annually from 2012 through last year. The wolves were averaging one moose kill every other day during the winter study period.

The moose explosion has damaged the park's vegetation, particularly balsam fir, their food of choice during long, snowbound winters. They've killed off many of the mature trees. Last winter, moose munched virtually all the new growth that had poked above the snow in one monitored section.