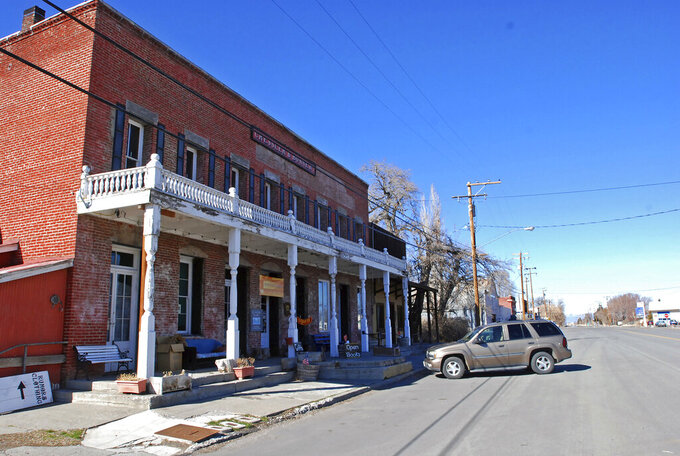 FILE - This Feb. 22, 2014, file photo shows a business in downtown Cedarville, Calif., in Modoc County. The rural California county is defying Gov. Gavin Newsom's coronavirus shutdown order and has become the state's first county to let nonessential businesses reopen. Diners are being allowed into restaurants in Modoc County in the state's northwestern corner near Oregon. Newsom did not say Thursday, April 30, 2020, whether he would intervene in Modoc County as he did in Southern California. (AP Photo/Jeff Barnard, File)

Modoc County moved Friday to reopen hair salons, churches, restaurants and the county’s only movie theater. There haven’t been any confirmed cases of COVID-19 among 9,000 residents, but the reopening came with strict social distancing limits. Businesses could only have half the patrons, and customers must stay 6 feet (1.8 meters) apart.

The county is an outlier in every sense of the word. It is tucked into the far northeast near the Oregon border, hundreds of miles from the capitol of Sacramento and even further politically from the Democrat-controlled state; it's a place where seven in 10 voted for Donald Trump in 2016.

At the Brass Rail in Alturas, two neon signs beamed “OPEN” and about a dozen customers were at the bar — the only portion of the Basque restaurant open so far. After a six-week shutdown, people were eager to be back among friends and neighbors.

“It’s been a long haul. We’re a small community,” owner Jodie Larranga said. “It’s not that we’ve been given permission, we’ve just had a belly full. People are fed up.”

Residents were putting their faith in local officials, not the state.

“Tex would never say it’s OK to be out in public if he didn’t truly feel it in his heart,” said Amber McCandles, 41, referring to Sheriff Tex Dowdy. He “has done a great job keeping us healthy. He shut the town down and kept us isolated, in quarantine, and kept us COVID-free.”

Local officials stressed the reopening followed Newsom’s phased plan to reopen the whole state, albeit earlier than he has approved.

“Our residents were moving forward with or without us,” Heather Hardwick, deputy director of emergency services, said in an email, adding that residents needed guidelines to do it safely.

Irene said she’s been following “the guiding light” of county officials in keeping the small eatery she’s run for 35 years closed except for takeout during the lockdown and was relieved to welcome folks back inside.

“People were constantly asking to be able to sit in the restaurant, and it was really, really difficult during this time to deny that,” she said. “It’s like the hardest thing I’ve ever done in my life, because part of that time we had inclement weather, rain and — no snow — but cold outside.”

Irene agreed that it was difficult for a law-respecting person to figure out what should be done when different levels of government are giving out different instructions.

Newsom has declined to address Modoc County’s move directly and has not responded to a demand from six other rural Northern California counties to also be allowed to reopen.

He said Friday during his daily coronavirus briefing that he is paying attention to their pleas.

“I’m looking forward to answering your call, addressing your anxiety," he said, adding: “We’re not turning our back to those concerns.”

California is hardly the only state where restrictions designed to slow the spread of the coronavirus have been met with recalcitrance.

On Thursday, the New Mexico Supreme Court ordered the mayor of the small city of Grants to comply with a statewide public health order and stop nonessential businesses from reopening. Martin “Modey” Hicks moved to let his city’s businesses open despite rising New Mexico COVID-19 cases. One local business, a pawn shop, was notified of a possible $60,000 fine for remaining open.

In Arizona, warnings from police and health officials didn’t stop Debbie Thompson from serving food Friday inside her small-town Horseshoe Café in Wickenburg, a town of 6,300 people west of Phoenix.

Thompson, 65, said her restaurant can’t survive on only carry-out orders until the restrictions expire in two weeks.

“They have just told me that I have to shut down. I am not. They will have to arrest me,” Thompson declared to the cheers and applause from several seated customers.

Though she was not arrested, Thompson later received a call from the state Department of Health Services telling her to stop violating Gov. Doug Ducey’s stay-at-home order that’s designed to stem the spread of the coronavirus.

In Maine, more than 100 people — virtually none wearing the required masks — gathered Friday to dine at the Sunday River Brewing Co. in violation of executive orders by Gov. Janet Mills, which bars restaurants from offering inside seating until June 1.

The restaurant is in Oxford County, where there have been only 15 virus cases and no deaths.

Owner Rick Savage was undeterred after the health department took away his food license Friday evening. That meant an automatic liquor license revocation, as well.

However, a post late Friday on the Sunday River Brewing Company’s Facebook page said the restaurant was closed. Savage said Saturday he would be consulting with his attorney on Monday about the status of his federal license for making beer and if that license is not affected, he planned to reopen.

"It’s only for a couple of days,” Savage said.

In Louisiana, LaSalle Parish in central Louisiana and East Feliciana Parish near Baton Rouge were bucking the governor’s continued coronavirus order by letting churches and other establishments open their doors to more people Friday.