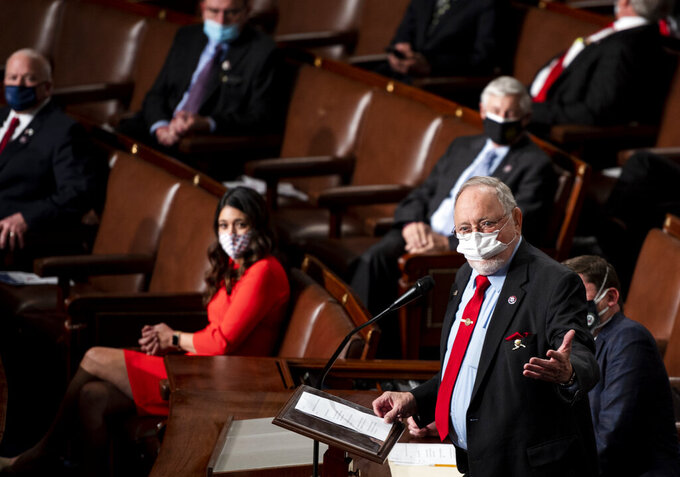 Rep. Don Young, R-Alaska, speaks on the House floor on opening day of the 117th Congress at the U.S. Capitol in Washington, Sunday, Jan. 3, 2021. (Bill Clark/Pool via AP)

ANCHORAGE, Alaska (AP) — U.S. Rep. Don Young of Alaska issued a call for bipartisanship among his congressional colleagues while giving the oath of office to House Speaker Nancy Pelosi.

As the longest-serving member of the House, Young, a Republican, is dean of the House and has the responsibility of swearing in the speaker. Pelosi, a California Democrat, was reelected to the role she's held since January 2019.

Young used Sunday's occasion as an opportunity to try to bring together the political parties that have become more deeply divided during Donald Trump's presidency.

“I’ve served with you longer than anybody else that served with you," Young said. "I love this institution. I will be honest, I do not like what I see. It’s time we hold hands and talk to one another.”

He then reminded Pelosi that she will be speaker of the entire House, not a single party.

"That may hurt some of you,” Young said, looking around the chamber as he spoke.

Young told Pelosi that if she encounters a problem, “let’s sit down and have a drink.” He said they could work to “solve those problems for the good of this nation, for this institution, and, as you said, for the future children of this great nation.”

Pelosi thanked Young and said that while she does not drink, she would be “happy to have ice cream with anybody, any time.”

Young, 87, who was elected to his 25th term in the House in November, released a statement after the ceremony that noted the hardship caused by the coronavirus pandemic and declared himself “more energized than ever to stand up for Alaska.”

“Today, it was my responsibility as dean of the House to swear in Speaker Pelosi, and I will continue using my position and long-time working relationships to ensure that families in Alaska have a bright and prosperous future for generations to come,” the statement said.