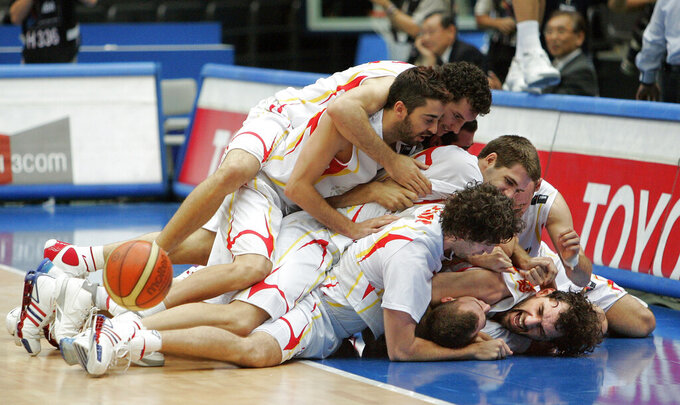 FILE - In this Sept. 1, 2006, file photo, Spain team members celebrate after defeating Argentina in the semifinals of the World Basketball Championships in Saitama, Japan. The 2006 world championship was perhaps the last truly wide-open international basketball event. Argentina arrived as the Olympic champion and Spain left as the world champion, the last time for a long while anyone other than the U.S. would hold either title. (AP Photo/Mark J. Terrill, File)

The 2006 world championship was perhaps the last truly wide-open international basketball event. Argentina arrived as the Olympic champion and Spain left as the world champion, the last time for a long while anyone other than the U.S. would hold either title.

It’s where Marc Gasol’s career would take off and where a devastated Mike Krzyzewski contemplated his ending — as the U.S. coach, anyway, after what would be his lone loss.

Even now, 15 years later, players can still recall certain moments as if they happened only 15 minutes earlier.

“I think it was a very good tournament,” Argentina’s Luis Scola said, adding there were “good memories” for his basketball-loving country.

And the Argentines didn’t even win a medal.

The Olympic tournament that begins Sunday in Saitama — about 20 miles (32 kilometers) northwest of Tokyo — has some of the same feel as those worlds. The U.S. has the best individual talent, though maybe not the best team. Spain and Argentina are both formidable, just as they were back then when they played a thrilling semifinal at Saitama Super Arena.

The Spanish won that night, then beat the Argentines again in 2019 in the final to win a second world title. Ricky Rubio was MVP of the 2019 tournament, a star for his country who was too young for his chance to dance at center court with his teammates in 2006.

“It was special,” the Minnesota Timberwolves guard said. “It was special for Spain because it was a generation that was trying to win gold a couple years before in the Olympics and then they got beat by the USA team (in the quarterfinals).

“It was a great tournament all around, with the semifinal against Argentina was one of the best games I’ve ever seen and then the final was just, like, amazing.”

Games like those — along with Greece’s 101-95 victory over the U.S. in the semifinals, unheralded Nigeria nearly knocking off Dirk Nowitzki and Germany, and an exhausted Yao Ming keeping China in a game against Slovenia long enough for his team to win on a buzzer-beater and advance to the knockout round — gave the late-summer event a March Madness feel.

“The 2006 world championships were loaded with talent!” said Washington Wizards general manager Tommy Sheppard, who was at the event and said it had “amazing coaches and players from top to bottom.”

Slovenia, with NBA superstar Luka Doncic, and a Nigerian team that beat the U.S. in exhibition play will be back as part of this tournament in Saitama.

The U.S. doesn’t remember the last one so fondly.

In the first tournament after Jerry Colangelo took over the USA Basketball program following the Americans’ third-place finish in the 2004 Olympics, the U.S. stormed to the semifinals without a loss and had a double-digit lead against Greece in the first half. The Greeks turned the game around with sensational shooting in the second and third quarters, leaving the U.S. without a gold medal in a major event since the 2000 Olympics.

He stopped on his walk back to the locker room to apologize to Colangelo, who wouldn’t hear of it.

“I said, ‘Coach, come on.’ I said, ‘Look, I’m as unhappy as you are. There’s no apology. This is a collective thing,’” Colangelo said.

In the other semifinal, Spain edged Argentina 75-74 when Andres Nocioni missed a 3-pointer from the corner on the game’s final shot.

“A great look from a great player who shoots very well from that position. It didn’t go in,” Scola said. “We could’ve won or at least been in the final, but I felt it was very good memories for our country in basketball. I think we did very well there.”

Tournament MVP Pau Gasol broke his foot in that game and missed the final, but younger brother Marc came off the bench to cap his debut with the national team as Spain crushed Greece 70-47.

The U.S. bounced back from its loss to Greece to beat Argentina for bronze, but that was little consolation. Colangelo said he didn’t even watch the tape of the loss for about a year and a half.

Once he did, it was clear what the Americans needed: bigger guards to defend the pick-and-rolls they had been punished by. With Kobe Bryant and Jason Kidd as the starting guards in the 2008 Olympics, the U.S. routed Greece in the rematch and won gold as part of a winning streak under Krzyzewski that would last the next decade.

“It took some time for us all to get over that, but we learned a great deal about the international game and how our players adapted or didn’t,” Colangelo said. “It was a learning experience for sure.”