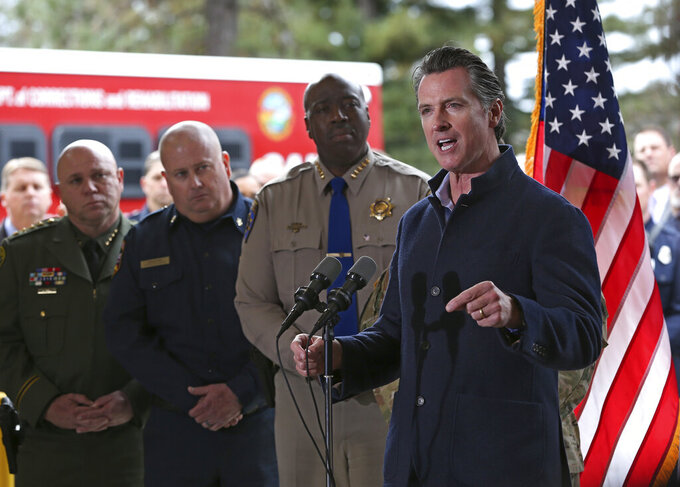 FILE — In this Jan. 8, 2019 file photo Gov. Gavin Newsom discusses emergency preparedness during a visit to the California Department of Forestry and Fire Protection CalFire Colfax Station in Colfax, Calif. On his first full day as governor, Newsom announced executive actions to improve the state's response to wildfires and other emergencies. Newsom has vastly overstated wildfire prevention work done under his administration according to an investigation by Capital Public Radio, published Wednesday, June, 23, 2021. (AP Photo/Rich Pedroncelli, File )

State fire officials have treated less than 18 of the 140 square miles (50 of the 365 square kilometers) that the Democratic governor has touted, the radio station reported. The land is part of 35 priority projects Newsom designated in 2019 on the heels of the deadliest wildfire season in state history.

In 2020, California's fuel reduction efforts also dropped from the year before, and Newsom cut the fire prevention budget by $150 million, CapRadio reported.

The governor's office declined to comment on the investigation, and state fire officials took responsibility for Newsom sharing inaccurate information. The California Department of Forestry and Fire Protection had not “done our job in educating the public, nor the governor's office” on how to communicate about the efforts, Chief Tom Porter said.

Republican lawmakers and those challenging Newsom in an expected recall election later this year quickly jumped on the story as evidence of mismanagement and deceptive governing.

“It's clear that Gov. Gavin Newsom has our state woefully unprepared for fire season," former San Diego Mayor Kevin Faulconer said in a video posted on Twitter. “It's time to have a governor that's going to take it seriously, not stand up and say one thing and do another."

State Assemblyman Vince Fong, the top Republican on the Assembly's budget committee, called for an oversight hearing into the radio station's findings.

Newsom took office in January 2019, months after the deadliest wildfire in state history. He spent his first full day in office committing to greater investment in wildfire prevention.

He proclaimed a state of emergency in March 2019 and directed Cal Fire to begin working on 35 projects covering 140 square miles (365 square kilometers) deemed at high wildfire risk. In January 2020, Newsom's office issued a press release saying 34 of the projects had been completed, with work including removing dead trees and creating fuel breaks. It specifically said 140 square miles (365 square kilometers) had been treated.

“The unprecedented scale of the crisis requires an unprecedented response. These projects are part of California’s all-of-the-above and all-hands-on-deck approach to preventing and fighting wildfires," Newsom said in the statement.

The amount of land Newsom said was treated “was the overall project area but not necessarily the area treated,” Cal Fire spokesperson Daniel Berlant said.

Porter, the Cal Fire chief, said the state never had the environmental clearance or landowner agreements in place to treat the full land area.

Overall, the agency treated more land in 2019 than the year before. But that number fell again in 2020, partly because of the coronavirus pandemic.

Experts said California should be treating more than 1,500 square miles (4,050 square kilometers) annually, particularly as the state gets drier and hotter.

While spending on wildfire prevention dropped in 2020, Newsom says he wants to put $1.2 billion toward wildfire resiliency efforts this year.

John Cox, a Republican candidate running against Newsom, said the governor was “playing politics instead of solving problems."

“Newsom promised transformational attention to wildfire prevention; instead, the only thing transformed has been California’s landscape as a result of record fires," Cox said.