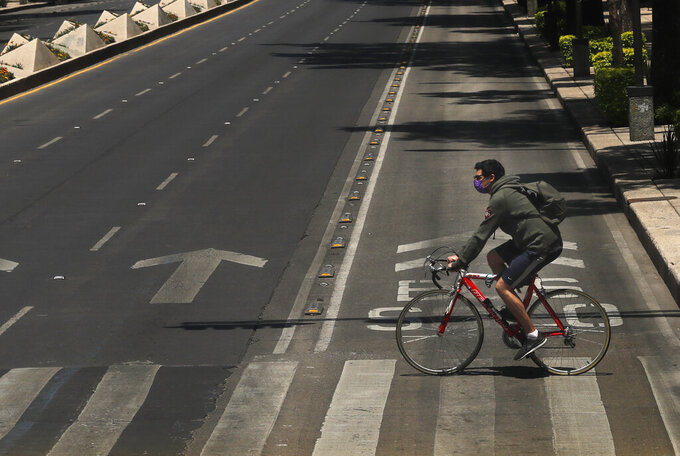 A cyclist wears a protective mask as a precaution against the spread of the new coronavirus as he crosses Mexico City's Reforma avenue, Monday, April 27, 2020. (AP Photo/Marco Ugarte)

MEXICO CITY (AP) — Mexico’s economic activity dropped 1.6% in the first quarter compared to the final three months of 2019, plunging the country deeper into a recession that predated the coronavirus pandemic, according to a report released Thursday by the government statistical agency.

Mexican President Andrés Manuel López Obrador, who has said he does not want the country to take on more debt during the pandemic, has been criticized by the business sector for not doing enough to keep the economy afloat.

The economic consequences of social distancing measures to slow the virus’ spread are expected to be more fully on display in the second quarter.

But Mexico's Treasury Department said in a statement that “our economy will benefit from the coordinated reopening of key sectors starting in the coming weeks, under the necessary sanitary protocols, to ensure the functioning of production chains with the United States and Canada.”

Mexico said last week it plans to reopen automotive and other factories in conjunction with the United States and Canada.

The U.S. government has launched a campaign to get Mexico to reopen plants, suggesting the closures were hampering defense acquisitions and the supply chain of the North American free trade zone.

On Thursday, Ellen Lord, U.S. undersecretary of defense for acquisition and sustainment, said that “we appreciate Mexico's ongoing positive response” in the campaign to “catalyze the re-openings in Mexico.”

López Obrador has bet on a series of big infrastructure projects to reactivate the economy and create jobs. One of the main projects is a tourist and passenger train that would run 950 miles (1,525 kilometers) around the Yucatan peninsula. Known as the Maya Train, the project would connect tourism resorts and ruin sites.

On Thursday, the national tourism fund announced that a company owned by Mexico's richest man — telecom and construction magnate Carlos Slim — had won a $770 million contract to build part of the rail line. A consortium including Slim's Operadora CICSA and Spain's FCC Construcción SA won bidding on the second portion of the Maya Train line, which runs 146 miles (235 kilometers) through the state of Campeche.

Last week,a contract for the line's first section was awarded to a Chinese-Mexican consortium of companies.

There are environmental and development concerns about the project, which is envisioned to carry tourists from the white sand beaches of the Mayan Riviera to the peninsula’s more remote interior.