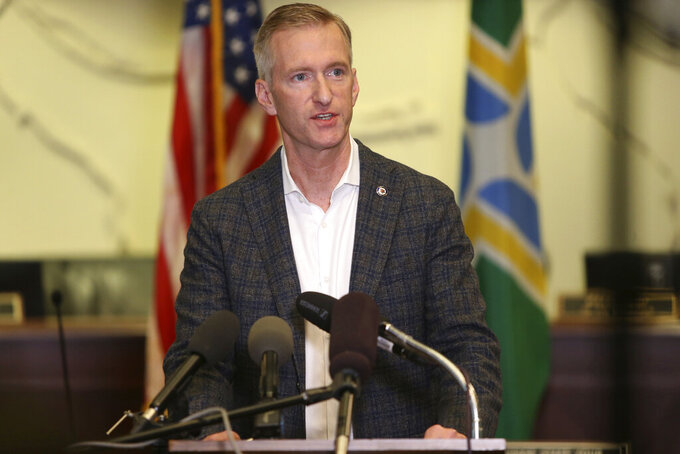 FILE - In this Aug. 30, 2020 file photo Portland Mayor Ted Wheeler speaks during a news conference. On Monday, Jan. 25, 2021, Wheeler said the ongoing criminal destruction and violence occurring in his city - which has been the epicenter of protests against racial injustice for eight months - is "unacceptable." (Sean Meagher/The Oregonian via AP, file)

PORTLAND, Ore. (AP) — Portland, Oregon, Mayor Ted Wheeler pepper-sprayed a man who confronted him and a former mayor as they left a restaurant Sunday evening, according to a police report.

Wheeler and and Sam Adams, who served one term as Portland mayor from 2009 to 2013, had been eating in a tented area at Hillsdale McMenamins Hillsdale Brewery and Public House in Southwest Portland. When the two left, Wheeler said a man, who he did not recognize, approached him — videotaping the mayor and accusing him of dining without wearing a mask.

According to a statement the mayor gave to police, Wheeler told the man of current COVID-19 regulations, which allows people to take their mask off to eat or drink.

“He then accused me of other things to which I indicated he did not understand the rules and should probably have a better understanding if he was going to confront people about them,” Wheeler said in his statement.

Wheeler said that the man stood close to him and he became concerned for his safety and contracting COVID-19. Wheeler told the man to “back off” and that he was carrying pepper spray, which he would use if necessary. When the man did not listen the mayor said he sprayed him in the eyes.

“He seemed surprised and backed off,” Wheeler told police. “He made a comment like, ‘I can’t believe you just pepper sprayed me.'"

Adams, whose statement to police was consistent with the mayor's, suggested to Wheeler he should leave for his safety. Before doing so, Wheeler said he threw a bottle of water towards the man so that he could wash his eyes.

Wheeler, who was re-elected in November, has been targeted by left-wing demonstrators, including some who smashed windows and set fires inside his condo building.

Earlier this month, Wheeler was accosted by a group who yelled obsenities at him while he was dining at a restaurant outside in Northwest Portland.

On Monday Wheeler's office released a statement saying that, “The mayor is cooperating with the police investigation and encourages others involved to do the same."

During a press availability Monday, when asked about Sunday's incident the mayor acknowledged that something had happened and that he had filed a police report.

Much of the press conference, Wheeler spoke about recent violent protests. The mayor reiterated that ongoing criminal destruction and violence occurring in Portland, which has been the epicenter of protests against racial injustice for eight months, is “unacceptable.”

Wheeler said people participating in criminal destruction, whom he described as “thugs” and predominately “middle-age to young white men," should be arrested, investigated prosecuted.

For months demonstrations were held nightly in Oregon's largest city, following the killing of George Floyd in Minneapolis in May. Many ended with clouds of tear gas and clashing with police or federal officers.

Most recently, on Wednesday following the inauguration of President Joe Biden, more than 150 people gathered outside the U.S. Immigrations and Customs Enforcement building in Portland’s South Waterfront. Portland police said protestors were throwing rocks and eggs and vandalizing the building. Six people were arrested and officers declared an unlawful assembly.

The demonstration was one of several that took place that day — earlier far-left protestors smashed windows at the Democratic Party of Oregon building in Northeast Portland. Eight people were arrested.

Cline is a corps member for the Associated Press/Report for America Statehouse News Initiative. Report for America is a nonprofit national service program that places journalists in local newsrooms to report on undercovered issues.