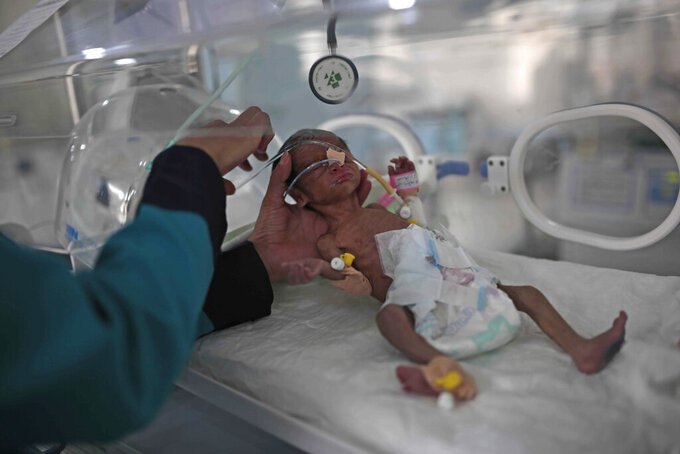 FILE - In this June 27, 2020 file photo, a medic checks a malnourished newborn baby inside an incubator at Al-Sabeen hospital in Sanaa, Yemen. Human Rights Watch warned Monday, Sept. 14, 2020 that warring parties in Yemen's yearslong conflict are “severely restricting” the delivery of desperately needed aid as the country slides toward famine amid the coronavirus pandemic. (AP Photo/Hani Mohammed, File)

CAIRO (AP) — Warring parties in Yemen's yearslong conflict are “severely restricting” the delivery of desperately needed aid as the country slides toward famine amid the coronavirus pandemic, a rights group warned on Monday.

Human Rights Watch said international donors slashed their funding in June partly because of the “systemic interference” in relief operations by the Houthi rebels who hold Yemen's capital, Sanaa, as well as by the country's internationally recognized government and their southern separatists.

“Millions of Yemenis depend on the authorities letting aid flow freely for health care and other necessities,” said Gerry Simpson of Human Rights Watch.

Yemen is home to the world's worst food crisis, mostly due to the civil war that pits the Houthis in the north against a Saudi-led coalition and its allies in the south, including separatist forces. The Houthis seized Saana in September 2014. The coalition entered the war in March 2015 on behalf of Yemen's internationally recognized government.

The New York-based watchdog said the Houthis denied obstructing aid, saying groups that made the allegations were following “political orders” from the United States. Yemen's internationally backed government and the southern separatists did not respond to requests for comment from The Associated Press.

The obstructions partly led to a collapse in donor support to U.N. aid agencies in June. A top U.N. official warned last month that Yemen is sliding toward famine as the coronavirus spreads and its economy implodes.

Some 24 million Yemenis, or 80% of the country’s population, require some form of assistance or protection, according to the U.N. Already, 75% of U.N. aid programs for the country have closed or reduced their operations.

Yemen has confirmed more than 2,000 cases of the coronavirus, including 584 deaths. However, the actual tally is believed to be much higher as testing capabilities are severely limited and the Houthis have stopped issuing statistics from areas they hold.

Human Rights Watch called for the U.N. to establish an independent inquiry into the extent of obstruction and shortcomings in the humanitarian community’s response. It also urged warring parties to immediately end the obstructions.

However, multiple U.N. reports and appeals have yet to see an end to the crisis in Yemen.

In a letter to the U.N. General Assembly, two dozen aid agencies said two-thirds of Yemen's population of about 28 million people are hungry, and nearly 1.5 million families currently rely entirely on food aid to survive.

The agencies, including Oxfam, Doctors Without Borders and the International Rescue Committe, warned that the suspension and cut of aid is leaving Yemeni families vulnerable to malnutrition, disease and death. The latest data shows that another million people are set to fall into crisis levels of hunger before the year end. Women and children are the worst affected, with 1.4 million pregnant or breastfeeding women and over two million children suffering from malnutrition, the agencies said.