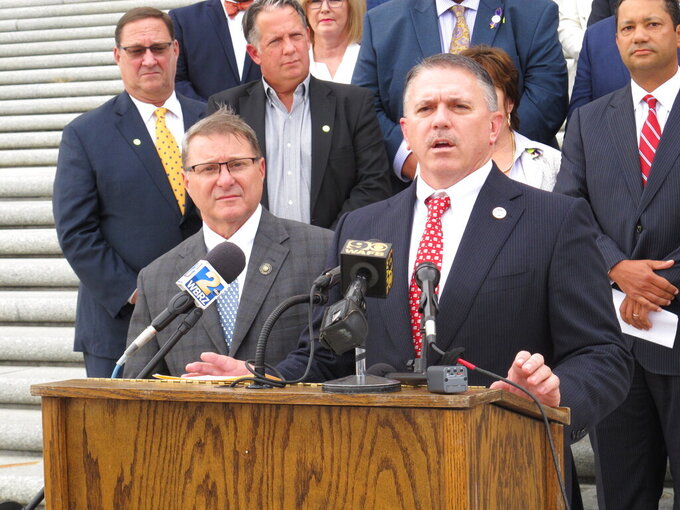 BATON ROUGE, La. (AP) — After a last-minute scramble to pass the business lobby's top priority for the regular session, Republican legislators quickly realized they mangled the language of the bill aimed at limiting damage claims against insurance companies in car wreck lawsuits.

Now, GOP lawmakers are spending time in a 30-day special session that was supposed to focus on the budget and taxes amid the coronavirus pandemic instead trying to clean up their problems with the bill and to persuade Democratic Gov. John Bel Edwards to sign the changes into law.

Supporters of the sweeping changes to Louisiana's civil litigation system pitched the proposal as a way to lower insurance rates by making it less lucrative to sue over car accidents. But in the flurry of final rewrites to the legislation amid negotiations with the Edwards administration, lawmakers added language that could cause even larger damage awards in some of those lawsuits.

Rep. Kirk Talbot, the River Ridge Republican who handled the so-called “tort reform” bill, downplayed the problem Wednesday. He called it a mistake and said lawmakers can rewrite the problematic provision in a second bill in the special session and send that to Edwards.

But Edwards — whose allies and campaign contributors include personal injury lawyers — didn't say Wednesday what action he'll take on the first bill, if he'll veto it or whether he'll go along with the adjustments GOP lawmakers want to make.

“It's apparent that the bill that Sen. Talbot authored managed to make absolutely nobody happy, which is sometimes the sign of a really good compromise, but I don't think that's what the issue is here,” the governor said. “But we're going to take a good look at it.”

It's unclear if Republican lawmakers could get the two-thirds House and Senate vote required to override an Edwards veto if the governor takes that action.

The Louisiana Association of Business and Industry, a primary backer of the legislation, is urging Edwards to sign the bill and work with lawmakers on the language fix.

If the governor vetoes the measure, LABI President Stephen Waguespack said in a statement on Twitter that he expects lawmakers to “send additional measures to his desk during this special session, to ultimately fix Louisiana's broken legal system and lower auto insurance rates."

The measure would force jury trials more frequently, so lawyers have to argue damage claims to more people than a single judge; cap certain damages that can be awarded; limit when insurance companies can be sued directly; and increase the time accident victims can file lawsuits to give more time for settlement negotiations. It also would allow information about whether someone was wearing a seatbelt as evidence in litigation.

Bill backers said those changes would lessen “frivolous lawsuits" over car accidents, which they said have driven up Louisiana's automobile insurance rates to the nation's second-highest. They said enacting changes that discourage the lawsuits and force down payouts would draw more insurers to the Louisiana market.

But the last-minute language error also could require the court to award certain damages that end up being more lucrative to those filing the lawsuits.

Conservative talk radio show host Moon Griffon lambasted Republican legislative leaders for the mistake, calling it an “embarrassment” that they rushed through a final version of the bill in the waning minutes of the regular session when it was supposed to be a priority.

“They didn’t even have time to read it,” Griffon said on Wednesday's show. “It’s a horrible deal.”

Opponents of the package of civil litigation system changes, largely lawyers and Democrats, argued the measure would keep people from getting money needed to cover their medical bills and could increase costs for courts. They also repeatedly pointed out the bill didn't mandate a drop in car insurance premiums.