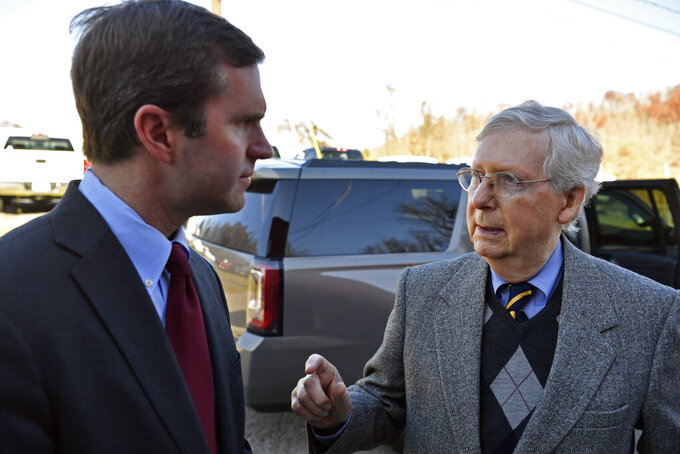 Shortly after gaveling in after a nearly two-week break, the GOP-dominated legislature turned to sweeping aside a stack of vetoes by Gov. Andy Beshear. The override votes spanned hours, from early afternoon and continuing into the late night. Some of the overrides stripped away parts of the governor's executive authority, shifting the power to statewide Republican officeholders.

It continued a theme throughout the contentious legislative session. The governor has hinted he expected more court challenges to some vetoed bills if they become law. Beshear and Republican legislative leaders already are waging a court fight over previous measures that threatened to invalidate the governor's executive orders to try to slow the spread of COVID-19.

The House and Senate, both with GOP supermajorities, voted to override Beshear's veto of a bill to create a “hybrid” pension tier blending defined benefit and contribution components for new Kentucky teachers hired starting in 2022. It would mean that teachers hired starting next January would be required to contribute more toward their retirement benefits.

The bill would not affect teachers already enrolled in the retirement system.

Supporters said the measure was needed to relieve some pressure on the state’s public pension plan for teachers. In defending the bill Monday, Republican Rep. C. Ed Massey said education groups were involved as the bill was crafted.

“To say that this is against teachers is just a false narrative,” he said.

Republican lawmakers also wrapped up overturning Beshear's veto of a bill that opponents said would weaken Kentucky's open records law. The measure would give Kentucky lawmakers more authority to deny requests for legislative records. Instead of an appeal to Franklin County Circuit Court, the bill's intent is for those appeals to be heard by a panel of legislative leadership from both parties. Beshear has called it a “recipe for secrecy."

“If you don't have anything to hide, what are you afraid of?” Democratic Rep. Josie Raymond said in criticizing the bill.

In a major showdown, the legislature overrode the governor’s veto of a bill to allow a form of scholarship tax credits to pay for private school tuition in several of the state’s most populated counties. Many public school advocates opposed the proposal.

Meanwhile, Democrats also denounced a series of override votes on bills meant to reduce some of the governor's authority. Marzian called them a “power grab” by Republicans.

Among the measures overridden by both chambers were bills to:

—Remove the governor from his position as a member and chair of the State Investment Commission, shifting the treasurer into the chairmanship.

—Allow the state fish and wildlife board to appoint its own commissioner and set the salary.

Republican lawmakers also gave the state's agriculture commissioner additional appointment authority for the State Board of Agriculture and the Kentucky State Fair Board.

After the initial batch of vetoed bills sparked lengthy debates, House Republicans limited debate for other override votes Monday, which rankled Democrats. But the methodical process still continued late into the night.

Lawmakers still faced a potentially long agenda as they headed into the final day of the session on Tuesday. Some high-profile bills that haven't yet cleared the legislature were still pending. Those include proposals to curb no-knock police warrants and shield businesses from pandemic-related lawsuits.

The biggest question was whether lawmakers would decide how to allocate more of the massive infusion of federal money coming to state government from the pandemic aid measure championed by President Joe Biden. Beshear has been negotiating with legislative leaders on the matter.

Beshear offered a multi-layered plan for spending about $2.4 billion in federal pandemic aid being funneled to the state, including nearly $700 million in direct aid to small businesses and low-income Kentuckians. If lawmakers don’t reach final decisions on how to spend the federal money, it could create a need for a special legislative session later in the year to make those decisions.