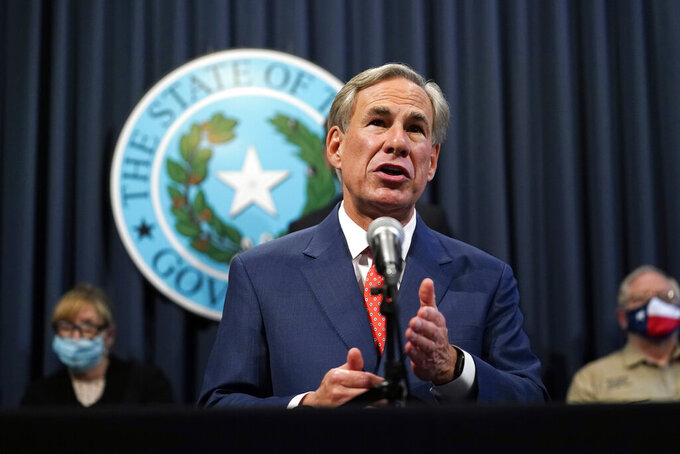 AUSTIN, Texas (AP) — Republican Gov. Greg Abbott, who has refused calls to expand mail-in voting in Texas during the coronavirus pandemic, was sued Wednesday by prominent members of his own party who now want to halt the biggest change he instead ordered for November's election — extending early voting by a week.

The lawsuit escalates an extraordinary backlash Abbott is facing from the Texas GOP's right wing that has criticized his handling of the pandemic as overbearing and unlawful. As Texas has now surpassed 15,000 deaths from COVID-19, anger among conservative activists has simmered for months over a statewide mask mandate and lockdown orders, including bars, which have been closed since June.

Previous challenges to Abbott's orders were largely mounted by conservative activists, but the latest one filed straight to the Texas Supreme Court widens the list to seven GOP lawmakers as well as Allen West, a former Florida congressman who is the new chairman of the Texas Republican Party.

They argue Abbott did not have the power to put in place six additional days of early voting without input from the state Legislature, which is out of session this year and won't meet again until January.

“Abbott’s Executive Orders are unprecedented and have had life and death implications, destroyed small businesses and family’s livelihoods, have had a crippling effect on every single community, and now have the ability to impact local, state and national elections," the lawsuit stated.

An Abbott spokesman did not immediately return a request for comment.

Early in-person voting in Texas begins Oct. 13. Those extra days have not satisfied voting rights groups or Democrats in Texas, which is one of just five states not offering widespread mail-in balloting amid the coronavirus pandemic. President Donald Trump has railed against expanding mail-in voting, claiming without evidence that doing so would lead to widespread fraud, and his allies in America's biggest red state have held the line.

Earlier this week, West released a statement suggesting without evidence that expanding voting access in any form in Texas would also invite fraud. “The more we expand the time, place, and manner that people can vote, the more opportunity there is for corruption," West said. Voter fraud is exceedingly rare in the United States, with one analysis by the Brennan Center for Justice finding it only occurs in between .0003 and .0025 percent of all votes cast.

Asked last week why Texas hasn't joined the list of states expanding mail-in voting — which now includes South Carolina, another red state — Abbott said lawmakers have previously decided the current rules are sufficient. “Those voting standards are thoughtfully arrived at, and have proven to be effective," he said.

Democrats, whose prospects in Texas this year are the brightest in decades, criticized the lawsuit.

“We should be expanding early voting and vote by mail options, not cutting them," Texas Democratic Party spokesman Abhi Rahman said. “We support voters having every opportunity to vote, and have been for those options the entirety of this pandemic — and the decades before that.”