Resistance to coup grows despite Myanmar's block of Facebook 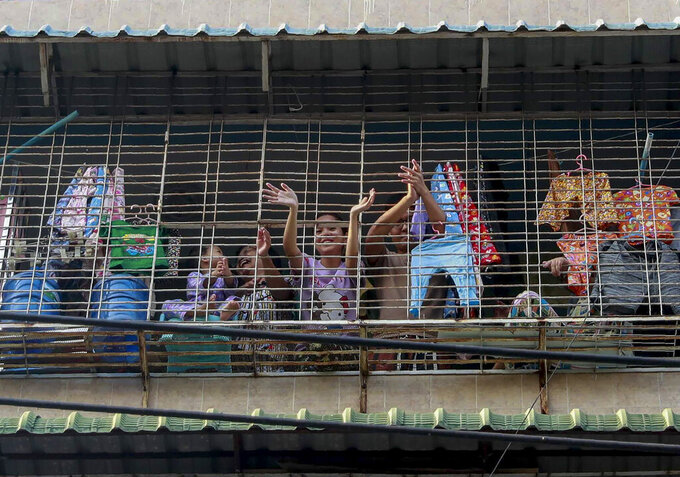 People clap to make noise as they participate in a civil disobedience action to protest against the military coup in Yangon, Myanmar, Tuesday, Feb. 4, 2021. About 70 recently elected lawmakers defied the new military government on Thursday by convening a symbolic meeting of the Parliament that was prevented from opening. They signed their oaths of office at a government guesthouse in the capital, Naypyitaw, where about 400 of them were detained in the aftermath of the takeover. (AP Photo)

Facebook is how most people access the internet in Myanmar and the company urged that it be restored.

The military seized power shortly before a new session of Parliament was to convene on Monday and detained Suu Kyi and other top politicians. The takeover has been criticized by President Joe Biden and others internationally who are pushing for the elected government to be restored.

“The Burmese military should relinquish power they have seized, release the advocates and activists and officials they have detained, lift the restrictions on telecommunications, and refrain from violence,” Biden said at the U.S. State Department in Washington, using Myanmar's former name.

The U.N. Security Council, in its first statement on the matter, “stressed the need to uphold democratic institutions and processes, refrain from violence, and fully respect human rights, fundamental freedoms and the rule of law.” While the U.S. and others have described the military's actions as a coup, the Security Council's unanimous statement did not.

The military has said it acted lawfully and constitutionally because the government had refused to address its complaints that last November’s general election, in which Suu Kyi’s party won a landslide victory, was marred by widespread voting irregularities. The state Election Commission has refuted the allegations.

About 70 recently elected lawmakers defied the new military government on Thursday by convening a symbolic meeting of the Parliament that was prevented from opening. They signed their oaths of office at a government guesthouse in the capital, Naypyitaw, where about 400 of them were detained in the aftermath of the takeover. They have since been told they can return to their home districts.

The unofficial convening was a symbolic gesture to assert that they, not the military, are the country’s legitimate lawmakers.

Some expressed their anger and their determination to resist the coup as they left the guesthouse.

“This violates the human rights of the whole citizenry. This is not a coup. This is a treason against the government. I will have to say that this is state treason,” said Khin Soe Soe Kyi, a member of Suu Kyi's National League for Democracy party.

The military put all state powers into the hands of the junta, including legislative functions, during a one-year state emergency. It also plans to form a new election commission to investigate its allegations of voting irregularities, to hold a new election at the end of the state of emergency and to turn over power to the winner.

Anti-coup graffiti appeared in the country's biggest city with “Don’t want dictatorship”’ scrawled on a wall on a busy street, and Yangon residents banged pots and pans and honked car horns in a noise protest for a third night.

In Mandalay, a northern city known for its activist politics, a spirited protest by about 20 people in front of the University of Medicine was broken up by police. Three were arrested.

Medical personnel have declared they won’t work for the military government. Health workers are highly respected for their work during the coronavirus pandemic that is taxing the country’s dangerously inadequate health system.

The protests have revived a song associated with a failed 1988 uprising against military dictatorship. Myanmar was under military rule for five decades after a 1962 coup, and Suu Kyi’s five years as leader have been its most democratic period since them, despite continued use of repressive colonial-era laws.

Videos posted on social media showed medical personnel and others singing “Kabar Makyay Bu” — or “We Won’t Be Satisfied Until the End of the World” — sung to the tune of “Dust in the Wind,” a 1977 song by the U.S. rock group Kansas.

Thousands of people in the capital Naypyitaw joined a rally in support of the military coup on Thursday, the latest of a number of events that aim to project an image of popular acceptance of the power grab.

But Suu Kyi, the daughter of an independence hero and a pro-democracy activist for more than three decades, remains the country's most popular politician. Her party said the charge against her is possessing illegally imported walkie-talkies, which were found at her house and were believed to be used by her bodyguards.

The charge, which carries a penalty of up to three years in prison, allows her to be held in custody until at least Feb. 15. Ousted President Win Myint is being held on a charge of violating a natural disaster management law. Suu Kyi is believed to under house arrest at her residence.

“Telecom providers in Myanmar have been ordered to temporarily block Facebook. We urge authorities to restore connectivity so that people in Myanmar can communicate with family and friends and access important information,” Facebook said in a statement.

In 2018, Facebook removed several accounts linked to Myanmar’s military, including that of Senior Gen. Min Aung Hlaing, the new government's leader, because their content appeared to fuel hatred toward the Muslim Rohingya minority. The Rohingya were targeted in a brutal 2017 army counterinsurgency campaign that drove more than 700,000 to neighboring Bangladesh. The International Court of Justice has been hearing a case arguing the army’s actions constituted genocide.

Jan Egeland, head of the Norwegian Refugee Council, said it was “deeply troubled” that Monday’s takeover by the military could affect ”people’s ability to access humanitarian assistance.”