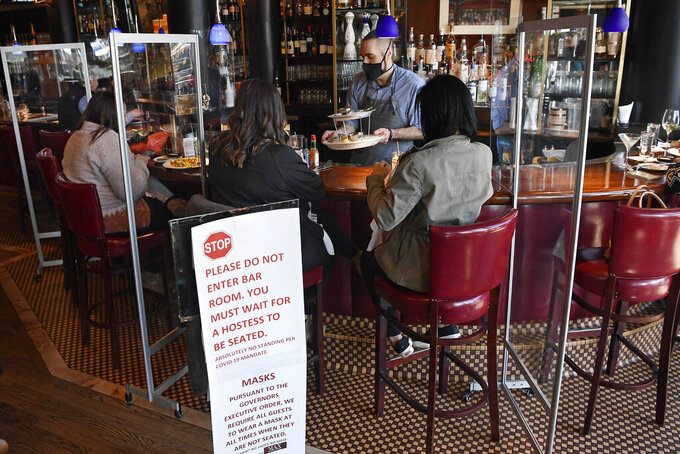 While Connecticut restaurateurs welcomed the end to COVID-related capacity limits inside their establishments on Friday, an industry trade group is cautioning that it's just a first step toward getting back to business as usual.

Scott Dolch, executive director of the Connecticut Restaurant Association, said most restaurant owners he has spoken to expect to be open at 65% or possibly 70% capacity and not 100% because of social distancing rules. Also, just because Gov. Ned Lamont ended capacity limits, Dolch said, doesn't mean all restaurants will be flooded with customers despite an increase in reservations since the governor's plan was announced on March 4.

“We’re definitely nowhere near out of the woods yet,” said Dolch, noting how he's worried about some restaurants located in cities where office workers have not yet returned and establishments that rely on conferences that aren't being booked.

“But I also have to be the optimistic, hopeful one for this industry, because I know how tough it’s been,” he said. “And I have to say to folks, ‘Hey, today is a really good day because there’s other states around us that haven’t done this.'”

Also, movie theaters and performing arts venues will only be allowed to open at 50% capacity. Restaurant seating will be limited to eight people per table and hours of operation capped at 11 p.m. Bars, meanwhile, will remain shuttered.

To date, more than 600 restaurants and caterers have permanently closed during the pandemic while about 300 have temporarily closed. Dolch said some of those businesses are beginning to reopen their doors with the latest changes and what he says has been growing confidence among customers with the safety precautions being taken couple with greater numbers of vaccinations.

Dolch said proposed legislation that would extend Lamont's executive order allowing expanded outdoor dining could encourage more restaurants to reopen or expand their dining capacity. It's currently set to expire April 20. A bipartisan bill that, among other things, would allow public sidewalks, parking lots and grassy areas to be used for outdoor food and beverage service, was being considered Friday by the Planning and Development Committee.

“In normal times, you’d have to go through a lot of red tape to get that approved,” said Dolch, referring to permitting for expanded outdoor dining. “The governor’s emergency orders expire and if they’re not extended, April 21st, without this bill, they wouldn’t be able to go out and use that parking lot or use that grass area.”

Rep. Dave Rutigliano, R-Trumbull, a restaurant owner, urged his fellow lawmakers in written testimony to support the legislation, noting that Lamont's order easing the outdoor dining restrictions was a great success for the restaurants and their patrons.

“Families were ecstatic to welcome back this long overdue pastime and once again have a chance to eat out safely,” he wrote. “We owe it to our restaurants and our communities to do everything in our power to help us recover from this shutdown."

The Connecticut Department of Labor continues to receive a high volume of unemployment claims with 200,000 to 210,000 people filing weekly.

While that's down from nearly 400,000 weekly filers in May of 2020, it's still much higher than before the coronavirus pandemic hit the state, when the agency handled an average of 40,000 filers a week. Since March 13, 2020, the department has received 1.4 million unemployment applications over the six programs it administers, a volume normally experienced over a 10-year period.

“This past year has been nothing short of devastating for our workforce and our economy. Out of 1.9 million workers in Connecticut, COVID-19 sent nearly 580,000 of them into unemployment,” said Department of Labor Commissioner Kurt Westby in a statement. He noted that the state's 40-year old computer system was never meant to handle that kind of surge, but the agency's benefits and technical teams kept the system running and whittled down a backlog of applications.

Westby credited the agency's customer care center with reducing a four-to-six week application processing time during the height of the pandemic to one-to-three days. The center has more than 100 staff members.

Meanwhile, Deputy Commissioner Dante Bartolomeo, said the agency has confirmed about 100,000 fraudulent unemployment applications were filed during the pandemic and ultimately stopped by the agency. The cases primarily involve people from the U.S. and abroad who've already stolen someone else's identity and applicants filing false information.

Earlier this month, Bartolomeo said 20,000 fraudulent applications were caught early in the process over several days. In early fall, one out of four unemployment applications was identified as fraud. She noted that fraudsters are not breaching the state Department of Labor's system, but rather are trying to use stolen personal information they obtained through other means.

Mandatory requirements for people who travel outside of Connecticut, including self-quarantining, are no longer in effect as of Friday. The Department of Public Health is urging Connecticut residents and travelers to the state to be cautious and follow travel-related guidance from the state public health officials and the U.S. Center for Disease Control and Prevention.