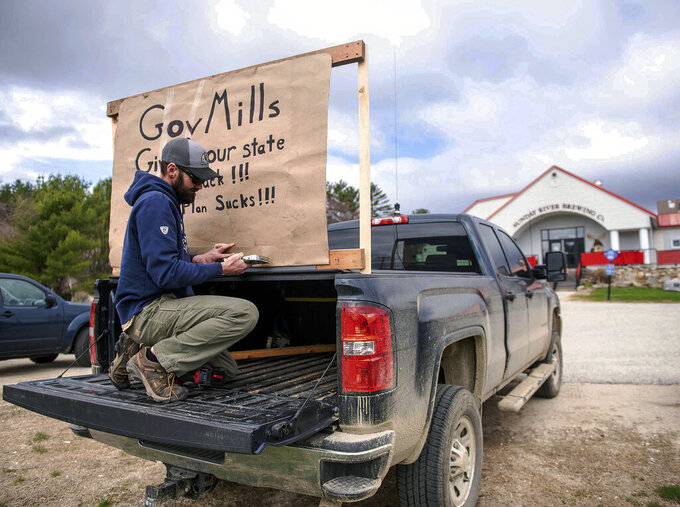 Shawn Garrity, from Arundel, staples a sign of support for the Sunday River Brewing Company in their parking lot on Tuesday morning, May 5, 2020, before the restaurant opened in Bethel, Maine. (Andree Kehn/Sun Journal via AP)

Rick Savage allowed dine-in customers in his Sunday River Brewing Co. in defiance of the governor's orders, which allow restaurants to open only for takeout orders until June 1. Savage continued to criticize Mills for not acting fast enough to reopen the state's economy after she took emergency steps to stem the spread of the coronavirus.

“They don't understand. They think they can take their time and figure things out. Businesses aren’t going to last,” he said.

The debate over the pace of reopening Maine's economy has pitted rural towns that have been largely unaffected by the virus against urban areas that are battling the pandemic. The Democratic Mills administration has indicated a willingness to adopt different rules for different regions.

The governor's office did not respond Tuesday to request for comment.

State Sen. Lisa Keim, a Dixfield Republican, said there’s talk of easing some restrictions on businesses, perhaps as soon as Wednesday. “A little bit of movement is coming,” she told the Sun Journal.

Savage became the voice of angry business owners last week when he denounced the governor on Fox News Channel and then shared what he said was her private cellphone number.

He lost his state licenses after opening for dine-in customers Friday. He said he decided to reopen Tuesday after determining that his federal beer-making permit wouldn’t be imperiled by his actions.

The state, he said, offered to restore his licenses if he'd opt for takeout orders instead of dine-in service. He rejected the offer and said he'll pay the fines.

Oxford County Sheriff Christopher Wainwright said his deputies won't get involved as long as things remain peaceful. He reiterated that deputies are focused on providing emergency services, not administrative enforcement.

The state reported four deaths and 21 more confirmed or likely cases of the coronavirus on Tuesday.

Not included in those numbers are 20 new cases at a Tyson food processing plant, bringing the number to 37, said Dr. Nirav Shah, director of the Maine CDC. All 391 full-time workers have been tested and the plant remains closed for the time being, he said.

Calais Regional Hospital and Penobscot Valley Hospital in Lincoln were both denied federal assistance under the program because they’d filed for Chapter 11 bankruptcy protection.

They're suing the Small Business Administration and say they could run out of money by the end of June because the pandemic forced them to end elective surgeries and outpatient services.

Golden, D-Maine, said his bill would allow hospitals with fewer than 500 employees that qualify as a “critical access hospital” to qualify for federal help even if they're in the midst of bankruptcy.

___ This story has been corrected to show that the restaurateur's most recent action was Tuesday, not Friday.