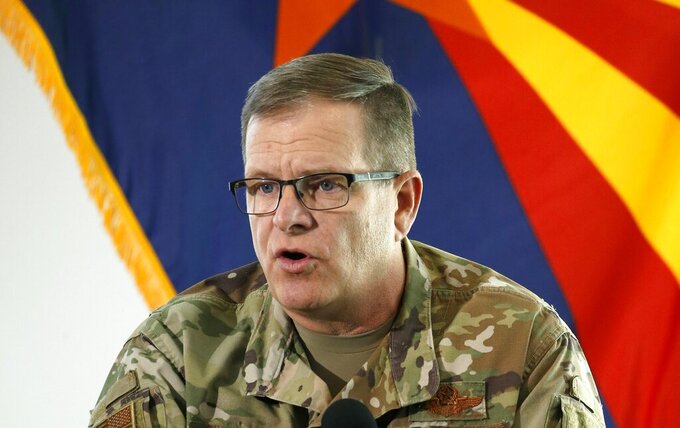 FILE - In this May 20, 2020, file photo, then-Arizona National Guard Maj. Gen. Michael McGuire, director of the Department of Emergency and Military Affairs, answers a question at a news conference in Phoenix. McGuire, the former head of the Arizona National Guard, has filed papers to run for the U.S. Senate, joining what's likely to be a crowded field of candidates seeking the Republican nomination. (AP Photo/Ross D. Franklin, Pool, File)

McGuire introduced himself with an online video highlighting his military career and presenting himself as a political outsider tired of “weak leaders” and “politicians who sit on the sidelines.”

McGuire calls in the video for securing the border, and says he opposes abortion, will protect 1st and 2nd Amendment rights and “will walk shoulder to shoulder with law enforcement.”

In an interview, he said he's a “strict conservative constitutionalist cut from the same cloth as Antonin Scalia," the former U.S. Supreme Court justice who advocated interpreting the Constitution as the framers intended. He said he wants to use the leadership skilled he honed from a career in military command to unite a Republican Party fractured between supporters and critics of former President Donald Trump.

“I intend to lead the Republican Party in this state,” McGuire said. “It needs to be led. I will lead from the front.”

McGuire said he voted for Trump and praised the economy, border security and vaccine production during his presidency.

He also said he has confidence in Arizona's vote count, which gave Democrat Joe Biden a narrow victory, but which Trump claims without evidence was marred by fraud. The former president and many of his supporters are closely watching an audit of the election results, including a full hand recount, in Maricopa County.

“I don’t think any of us should fear an audit where we hand count all the ballots,” McGuire said.

McGuire, who retired earlier this year from the military and from his post as head of Arizona’s emergency management agency, was a visible presence and a booming voice beside Gov. Doug Ducey during televised briefings about the pandemic. The guard helped deliver goods and stock shelves at food banks and grocery stores as supply chains froze up and panicked shoppers snapped up food and paper products last year.

The Guard also built temporary medical facilities and flew supplies to the remote and underserved Navajo Nation as the outbreak hit the reservation hard. Guardsmen also responded to racial justice protests following the police killing of George Floyd in Minneapolis.

About 85% of the Guard has been called up in the last year, more than have ever responded to domestic needs, McGuire said in April at a news conference where Ducey introduced his successor at the National Guard.

McGuire also oversaw the deployment of Guardsmen to the southern border.

McGuire, an Air Force Academy graduate, flew F-16 fighters before joining the Arizona National Guard in 2001, where he continued as an F-16 instructor pilot and flew MQ-1B Predator drones. Gov. Jan Brewer appointed him adjutant general, the Guard's top leader, and head of the Arizona Department of Emergency and Military Affairs in 2013. Ducey kept him in the job when he took office in 2015.

Kelly, a retired astronaut, won a special election last year to finish the late John McCain’s last Senate term. He is now running for a full six-year term. The race is one of the most high-profile contests in 2022 and will help determine which party controls the U.S. Senate.

McGuire said he's not worried about catching up to Kelly's significant head start in fundraising for what is likely to be one of the most expensive Senate contests in the country. Kelly's 2020 race was one of the most costly ever.

“ I know the voters are going to be with me,” McGuire said. “The money will come.”