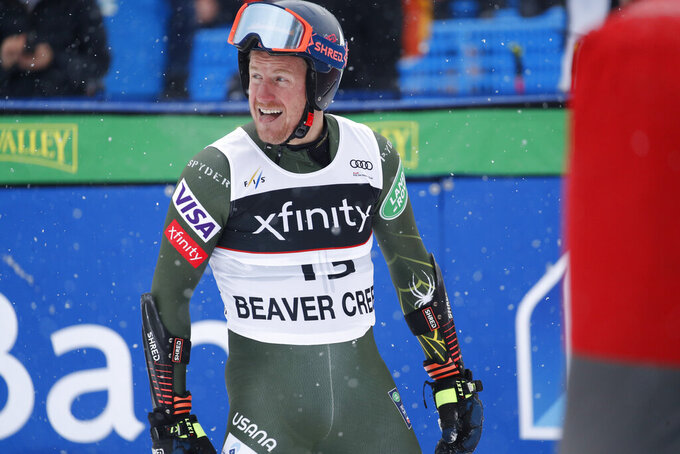 FILE - United States' Ted Ligety reacts after his run during a men's World Cup giant slalom skiing race Sunday, Dec. 8, 2019, in Beaver Creek, Colo. Ted Ligety hasn't given a return to ski racing even a moment of consideration. The persistent numbness in his foot deflects any would-be thoughts of stepping out of retirement. Still, the two-time Olympic champion will be heading to the Beijing Games — as an analyst for NBC.(AP Photo/John Locher, File)

BEAVER CREEK, Colo. (AP) — If two-time Olympic champion Ted Ligety gave even a moment of consideration to returning to ski racing less than a year after retiring, the persistent numbness in his left foot would deflect such thoughts.

“Surprisingly enough, I feel pretty good about my decision,” Ligety said in a phone interview. “I really haven’t missed it that much.”

But it’s hard for him to not be a little nostalgic.

The 37-year-old American returns to Beaver Creek this week to help call World Cup races for NBC and attend a celebration in his honor: He earned five of his 25 World Cup wins here, along with a gold medal at the 2015 world championships.

It’s a retirement party in front of fans and in place of the final run he didn’t get to take last season when the Colorado event was canceled due to the COVID-19 pandemic.

This works just fine. He’ll leave the racing to others.

“I mean, retirement and missing the competitions is made a lot easier by my body not being anywhere close to sustaining the forces to be good,” said Ligety, who won gold in the combined at the 2006 Turin Games and another gold in the giant slalom at the 2014 Sochi Olympics. “It would be not anywhere close to good enough to be able to race, so knowing that makes it a lot easier to let go of the dream.”

He will be heading to another Winter Games this February — as an analyst. There will be nerves, too, a “mini-version of the race jitters,” he described. But that’s as close to the course as he wants to get.

Over his lengthy career, Ligety was a textbook example of how to race the giant slalom. So much so that one of his biggest rivals, retired Austrian great Marcel Hirscher, referred to him as “Mr. GS.”

“He was one of the best GS racer that we had, all-time,” said French racer Alexis Pinturault, who has 18 World Cup victories in in the sport. "I really spent a lot of good times with him, sharing podiums and competing for victories.”

Ligety’s endured his share of setbacks over his career, returning from frayed cartilage in his hip, a torn ACL, metal screws that needed to be inserted into his wrist and surgery to fix herniated disks in his back.

It all finally added up, and he announced in February he was done with a career that spanned 336 World Cup starts and four Olympic Games.

Ligety underwent a procedure called microdiscectomy this spring to alleviate some of the pain, weakness and numbness he was experiencing.

“My foot’s still a little bit numb, but the strength and balance are there again,” said Ligety, who's back on his mountain bike. “It’s a work in progress.”

He keeps plenty busy these days chasing his kids around: 4-year-old Jax — who’s accompanying him to Beaver Creek and already is an avid skier — and 1 1/2-year-old twins, Alec and Will. Ligety’s also spending even more time on his ski-gear company Shred, which feature helmets and goggles worn by numerous athletes on the circuit and recently worked on get-ready-for-snow workouts with Apple Fitness.

Putting his analyst hat on for a moment, Ligety assessed the speed events this weekend in Beaver Creek. He likes Matthias Mayer of Austria. No surprise, really, given that Mayer won the downhill race last weekend in Lake Louise, Alberta. Keep an eye on Swiss racer Marco Odermatt, too, Ligety said, as well as Austria’s Vincent Kriechmayr and American Ryan Cochran-Siegle.

Speaking of watching, Ligety’s content to do just that.

“My body’s definitely done,” Ligety said. “It couldn’t take it anymore. It told me in so many terms.”