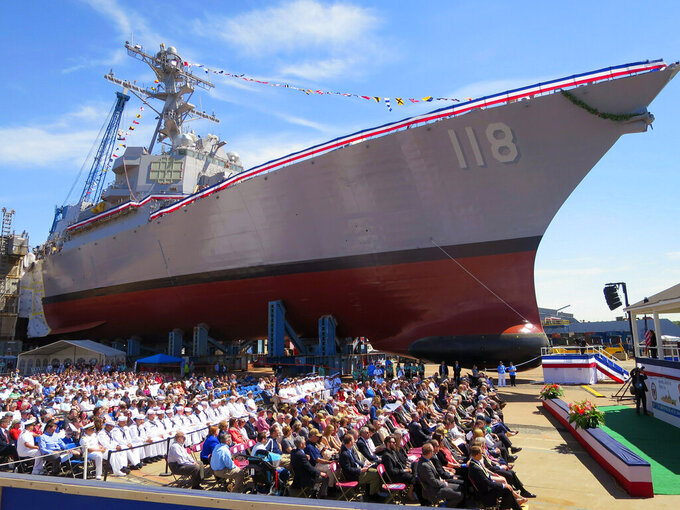 FILE - In this Saturday, June 22, file photo, people attend the christening ceremony for the future USS Daniel Inouye at the shipbuilder Bath Iron Works in Bath, Maine. The return of shipbuilders after a nine-week strike, which officially ended Aug. 23, 2020, is going smoothly at Bath Iron Works and the union and company already have begun meeting to get back on track. (AP Photo/David Sharp)

BATH, Maine (AP) — The return of shipbuilders after a nine-week strike is going smoothly at Bath Iron Works and the union and company already have begun meeting to get back on track.

The mediated discussions are aimed at both restoring trust and promoting efficiency to get caught up on the production of warships.

The General Dynamics subsidiary was already six months behind schedule on ship construction before the double whammy of the pandemic and strike, which officially ended Aug. 23.

“We've got a road ahead of us, but both sides are committed to working toward progress together," Suitter said. "With the initial meeting, things look good."

The company has expressed a hope that the discussions in which a federal mediator is present will improve performance and ensure a smooth transition of the new contract.

“We are glad to be back to building ships for the U.S. Navy with a renewed focus and commitment to doing so together, on time, every time,” company spokesperson David Hench said.

Workers began returning to their jobs after approving a three-year contract that they said addressed concerns in the previous proposal over subcontractors, work rules and seniority. Workers are receiving 3% raises each year, along with a signing bonus.

One of the sticking points is use of masks, which managers are required to wear at work. The company is recommending that production workers wear masks but they won't be required to do so until Oct. 5.

The mask issue has been a tricky one. Some workers have pushed back, saying masks impeded their work. Some even argued that a mask could pose a fire hazard in areas where welding takes place.

The 63-day strike was the first in two decades at the shipyard.

The shipyard on the Kennebec River is one of the Navy’s largest shipbuilder, and it’s also a major employer in the state with with 6,800 workers.