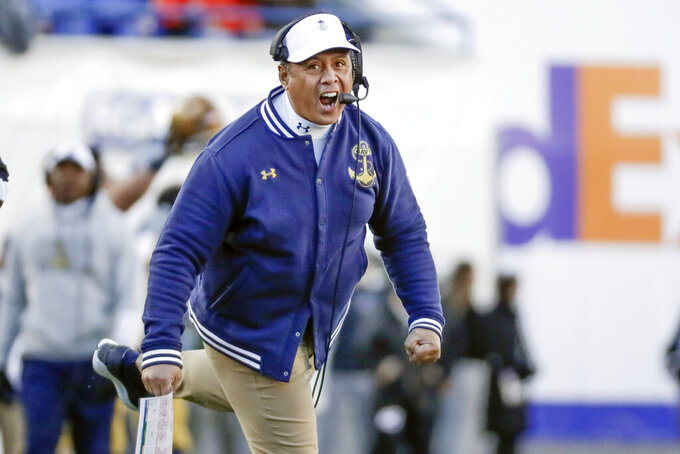 FILE - In this Dec. 31, 2019 file photo, Navy head coach Ken Niumatalolo cheers his team on in the first half of the Liberty Bowl NCAA college football game against Kansas State in Memphis, Tenn. For the first time since 1989, Navy and Brigham Young University will get together for a football game at the Naval Academy in Annapolis, Md., on Monday, Sept. 7, 2020. (AP Photo/Mark Humphrey, File)

Navy was supposed to open its football season in August against Notre Dame in Ireland before the coronavirus pandemic put an end to that endeavor.

The game was then set to be played at Navy, but COVID-19 blocked that plan, too.

So the Midshipmen went looking for someone else to play. Navy athletic director Chet Gladchuk wanted a notable opponent, and one shared his program's commitment to playing this fall while doing everything possible to keep players safe.

The Cougars filled that description and were also looking for an opponent for the opener. Utah backed out of a Sept. 3 matchup with BYU after the Pac-12 decided to play a conference-only schedule (then postponed the season altogether until at least Jan. 1).

And that is why Navy and BYU will meet for the first time since 1989 on Monday night at the Naval Academy in a game spawned out of necessity.

No fans will be allowed at the game, and neither will the Brigade of Midshipmen — a staple at every Navy home game.

Although Navy’s student body, including the football team, has been isolated on the Annapolis campus, the teams will perform in front of thousands of empty seats.

“Obviously, I would have loved to have fans there,” Navy coach Ken Niumatalolo said. “But it’s the right call.”

“We’re just going to play," he said. “It has never been a factor for us to look and see how many fans are in the stands."

BYU athletic director Tom Holmoe had to drastically rework the schedule after the Pac-12, Big Ten and Mountain West all postponed their football seasons.

Right now, BYU has eight games on its schedule. But that could change.

“Could add games as season progresses,” Holmoe said on Twitter.

Before the pandemic took hold, the Labor Day weekend schedule included intriguing nonleague matchups between some of the country's top teams.

Six months ago, this weekend was supposed to feature Southern Cal-Alabama, Michigan-Washington and Notre Dame-Oregon (after the Irish supposedly opened against Navy on Aug. 29).

Now, the first marquee game of the season is Navy-BYU in prime time on ESPN.

“I didn’t think we could get here, but we’re here," Niumatalolo said. “I think it will be good for our country to get back to normalcy as best you can. I don’t know if you call it normal playing in an empty stadium, but that’s the best we can do."

LIFE IN THE BUBBLE

Staying in the bubble known as the Naval Academy has shielded the Midshipmen from the outside world.

“It’s a testament to our players and the school. I think that allowed us to be safe," Niumatalolo said.

The isolation, however, has been a concern.

“I’ve had to deal with a lot more anxiety, depression, mental things," the coach said. “Those things are hard to gauge. It's not like a sprained ankle, where you can see the injury. I’ve probably sent more people to our sports psychologist this offseason than any year."