Review: Not quite a movie, but the Oscars were a love letter 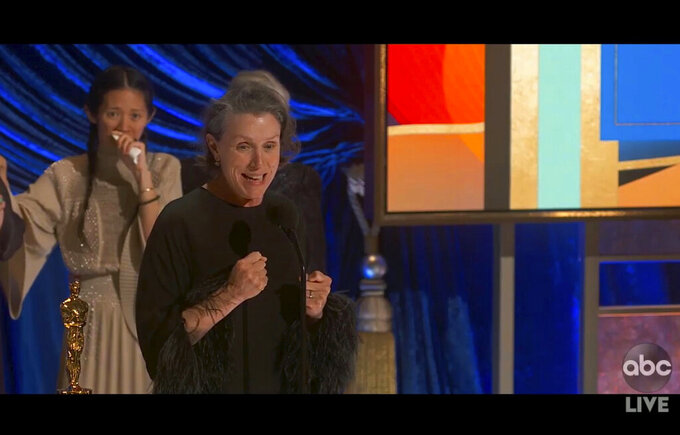 In this video image provided by ABC, Frances McDormand accepts the best picture award for "Nomadland" as director Chloe Zhao looks on at the Oscars on Sunday, April 25, 2021. (ABC via AP)

The 93rd Academy Awards wasn’t exactly a movie, but it was a show made for people who love learning about movies. And it stubbornly, defiantly wasn’t trying to be anything else. It wasn’t an advertisement for the nominated films that audiences at home may or may not have seen, a well-heeled stand-up routine or a star-studded concert. Although it did, curiously, turn into a brief musical trivia game 2 hours and 40 minutes into the evening. Best actress winner Frances McDormand said later upon collecting her trophy that, “They didn’t ask me but if they had, I would have said karaoke.”

There probably would have been fewer bleeps.

It was a show unlike any others this year and if you didn’t have a working knowledge of the films going into the night, the ceremony may have been a little mystifying. The spectacular musical numbers, atop the new Academy Museum and in Iceland, were pre-recorded and broadcast during the pre-show. There were no montages, barely any clips and only one major trailer debut during the commercial breaks (for Steven Spielberg’s “West Side Story” ). Aside from Regina King’s brisk strut through Los Angeles’ historic Union Station that kicked of the show with candy colored credits, it was a subtle, subdued and sincere affair (mostly).

Few would deny that the Oscars had gotten, if not stale, too safe. Certainly there were moments of excitement, whether in an unexpected winner, an true upset or something as colossal as announcing the wrong best picture winner. And this year had some historic possibilities up its sleeves, some of which it made good on ( like Chloé Zhao winning for directing and Youn Yuh-jung for supporting actress ) and some of which it didn’t (a Black woman still has yet to win two Oscars).

But it also had an impossible checklist: Revitalize the format, celebrate the movies, bring back awards show glamour, avoid a ratings disaster, get audiences excited about going back to the movies and put on a pandemic-safe show in person and without Zoom. It’s a big haul, not to mention the non-pandemic fact that the only thing that had gotten more predictable than the Oscars was people criticizing the Oscars: Too long, too boring, too preachy, not preachy enough, too irrelevant, too many montages (or not enough montages). It’s the show that many love to hate and no format or venue tweaks was ever going to change that.

Union Station, a legendary movie location already, provided a grand and fresh setting for the proceedings. They were shooting it all in 24 frames-per-second. The presenters were called cast members. Once it all got underway, however, it became clear that the transit hub was being used neither as supporting character nor symbol: It was just background — a place to construct the elegant Art Deco banquets where the nominees were seamlessly cycled in and out throughout the ceremony. And the cast of Harrison Ford, Brad Pitt, Rita Moreno and Reese Witherspoon? They were just presenters too. No one even seemed to interact with one another.

The ceremony was imbued with interesting personal anecdotes and a flurry of factoids about everyone's love of the movies that will surely necessitate some Wikipedia updates. There were beautiful and funny moments too and some that wouldn’t be possible if an orchestra was there playing people off. Would we have heard best supporting actor winner Daniel Kaluuya thank his parents for, well, doing what they needed to do to have him? Or best international film director Thomas Vinterberg reveal, through tears, that his daughter was killed in a car crash four days into filming “Another Round?”

With more time and a more intimate setting that felt like a throwback to the earliest days of the Oscars, when they were just an untelevised banquet for 270 people, it seemed the winners were ready to get personal with their speeches. They were talking to a small room of friends and peers: Not the anonymous faces of sponsors and friends of the studios/networks/financiers that usually help populate the 3,400 seats at the Dolby Theater (not to mention the global audience). Plus, the walk to the stage was mercifully short. And it was inspired to have Marlee Matlin present in American Sign Language and Bong Joon Ho in Korean.

Yet as the night wore on, some of the choices started to get more questionable. The biggest change was the decision to not present the best picture award last. Although likely conceived to ensure a finale with a star and not a stage of producers, it backfired. After “Nomadland” won the top prize, McDormand seemed even less interested in collecting hers. And it certainly didn’t help that the show ended on a down note when best actor went not to the late Chadwick Boseman as expected, but to Anthony Hopkins who simply wasn’t in attendance. It’s not a judgment of either performance, just the fact that it was an abrupt and unsatisfying conclusion. And just like that, the 93rd Oscars were over.

Usually the host bears the brunt of the blame or praise for the failure or success of an awards show. This year, however unfair, judgment is going to land on the most famous of the three producers: Steven Soderbergh. Like some Soderbergh productions, the 93rd Oscars were so different, with a voice and a pacing all its own, that its magic might not be immediately evident. But there was also, to use a film school cliché, a lot of telling and not a lot of showing. Never was that so clear as when the broadcast sped through the In Memoriam as though on fast forward.

There’s a danger in promising too much and the more-like-a-movie-less-like-a-television show concept was, in retrospect, a little lofty for what we got. No one's asking for their money back: The 93rd Oscars were by far the best movie awards show of the past year. Hopefully it's also the last pandemic show we'll ever have to endure.