Reyna follows dad, mom, among 6 debuts as US ties Wales 0-0 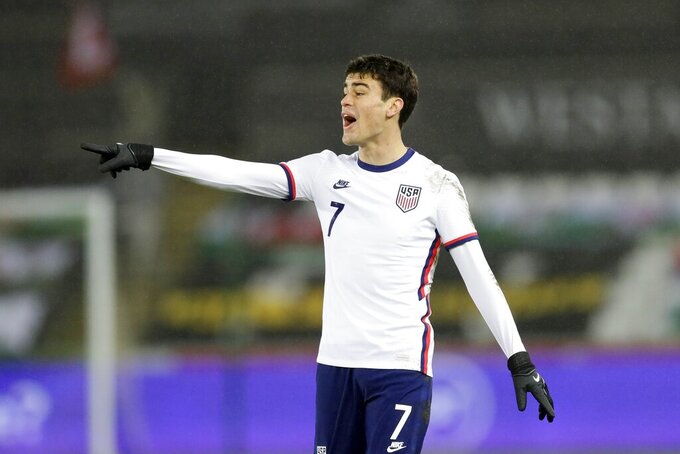 Gio Reyna walked onto the field for his U.S. national team debut, just like mom Danielle in 1993, just like dad Claudio in 1994.

“I wasn’t too nervous, to be honest,” Gio said. “I was just happy. I’m sure it’s a moment I’ll remember forever.”

On the day before his 18th birthday, Reyna showed the superior passing and dribbling ability that earned him playing time this year at Borussia Dortmund, skills similar to those his father flashed as U.S. captain. Reyna played 78 minutes Thursday night and was among six debuts for the Americans in a 0-0 tie against Wales in an exhibition at Swansea.

“Gio showed real quality at times,” said U.S. coach Gregg Berhalter, Claudio Reyna's former teammate. “It was the fluidity on the ball, getting in good positions that hurt the defense. His defending, I thought was a good start starting point. And overall, a 17-year-old debuting and he didn’t look like that.”

Claudio Reyna made 112 international appearances from 1994 to 2006, playing in three World Cups. The former Danielle Egan played six matches for the American women in 1993 and married Claudio in 1997.

As the Americans ended a 10-month layoff caused by the novel coronavirus pandemic, Reyna was joined in the starting lineup by Yunus Musah, a midfielder with Valencia who turns 18 on Nov. 19; and 19-year-old midfielder Konrad de la Fuente, who waits his first Barcelona senior team appearance.

Reyna was in a mobile and dynamic midfield, combining with 21-year-old Tyler Adams of Leipzig and 22-year-old Weston McKennie of Juventus. The starting lineup included 20-year-old right back Sergiño Dest, in his first season at Barcelona.

“I think we have a very bright future, as long as we keep our heads down, stay humble, continue to work hard,” said 25-year-old Zack Steffen, the backup at Manchester City who has taken over from Tim Howard as the top U.S. goalkeeper.

There were no fans at Liberty Stadium for the Americans’ first match since Feb. 1 and their first in a year on a FIFA international fixture date. Star Christian Pulisic was out with a hamstring injury.

“I’m hoping a lot of the guys that are here don’t feel like they made it yet,” McKennie said. “I was there myself. It’s easy to get a big head whenever you’re this young and all the hype is around and then you get caught up and you make your debut. But from what I’ve seen so far, I don’t think that there’s many of those players on this team.”

The U.S. has used 88 players since the October 2017 defeat at Trinidad and Tobago that eliminated the Americans from the 2018 World Cup, including 50 debuting.

Although this was a friendly that lacked intense physical contract, it was against a mid-level team that has qualified for the European Championship.

Neither team had many chances but the U.S. outshot the hosts 7-4 and had 61% possession.

American Sebastian Llletget was saved on a long-range right-footed shot by Danny Ward in the 51st minute. Steffen make a right leg save in the 63rd on Daniel James, who had just entered and got by left back Antonee Robinson streaking down a flank.

“The next big thing that we might have to work on is just having a deadly instinct and scoring a goal,” McKennie said. “You can have as many clean sheets as you want, but you win games by scoring goals.”

The U.S. plays Panama on Monday at Wiener Neustadt, Austria. The Americans are preparing for a CONCACAF Nations League semifinal against Honduras in June and the likely start of World Cup qualifying in September, a grind that likely will include three matches per international window.

A record 10 Americans are in the European Champions League this season and American from the big four leagues of England, Germany, Spain and Italy started together for just the third time.

“And that’s super important for us down the line because when you have fans and you have tough environments to play in, you’re always going to think back to, oh, I remember when I handled it well in Manchester United, so I think I’m going to be able to handle it well now," he said.