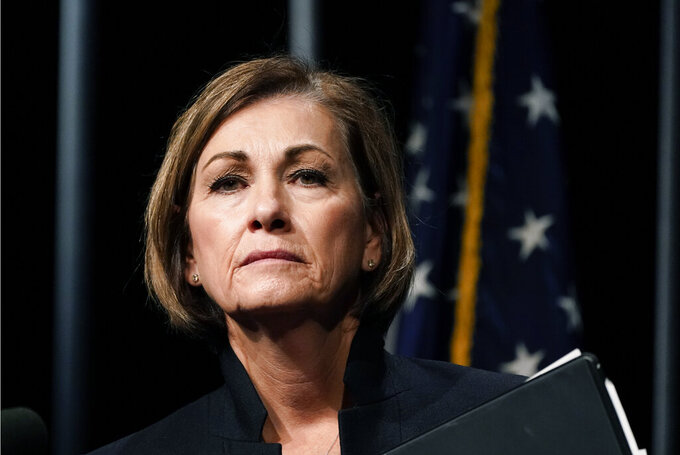 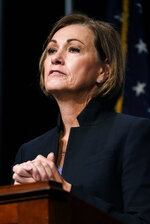 DES MOINES, Iowa (AP) — Gov. Kim Reynolds announced Thursday that she will provide $14 million in federal funds to Iowa's long-term care centers to help them manage new outbreaks of the coronavirus at the facilities.

The federal virus relief money will pay for additional testing and staffing at the long-term care centers, and it comes at a time when Reynolds said another 20 facilities are dealing with outbreaks of the coronavirus. That means about a quarter of the state's care homes now have outbreaks.

Infections at care centers can be especially devastating because older people are especially at risk of becoming seriously ill or dying of COVID-19. Reynolds noted that 74% of the people now being treated in hospitals for the virus are older than 60.

Reynolds said that “underscores the importance of taking measures to protect those most at risk whether due to age or underlying health conditions."

Reynolds announced the funding on a day the Iowa Department of Public Health reported an additional 38 deaths in the 24 hours ending Thursday morning, raising the state's COVID-19 death toll to 2,102 people. There were 4,195 more confirmed cases reported during that period, for a total of 198,674 since the pandemic started.

In the last seven days, one of every 109 people in Iowa was diagnosed with COVID-19. Iowa has the nation's third-highest number of new virus cases per capita in the past 14 days, according to data from Johns Hopkins University.

Reynolds also announced that television, radio and print advertisements were beginning across the state, aimed at encouraging people to take steps to slow the spread of the virus, such as wearing a mask, social distancing and washing hands. The ad campaign, which is being funded with about $440,000 in federal funds, features Reynolds along with former Gov. Tom Vilsack, Iowa wrestling great Dan Gable and others.

Reynolds mentioned the need to be especially mindful during Thanksgiving, but when asked her advice for people considering holding family gatherings she didn't discourage them from such festivities.

“Just be conscientious of your surroundings, who you're bringing in and practice mitigation efforts," Reynolds said. “But Iowans know what to do. They'll do the right thing. They're responsible."

On Thursday, the Centers for Disease Control and Prevention recommended that people not travel over the Thanksgiving holiday and consider holding only smaller gatherings with those in their household.