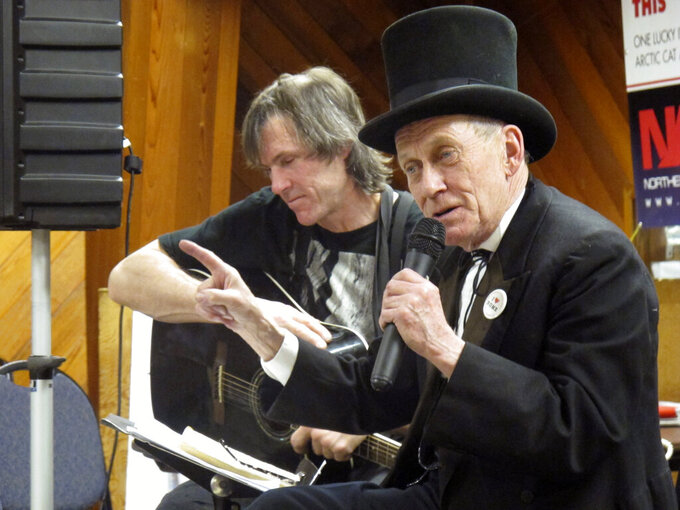 FILE - This March 15, 2012 file photo shows Richard Beneville, right, reading poetry to volunteers and fans at the Iditarod Trail Sled Dog Race headquarters in Nome, Alaska. Beneville, who was in his third term as the mayor of Nome, Alaska, died Monday, May 11, 2020, of pneumonia at the age of 75. (AP Photo/Mark Thiessen, File)

ANCHORAGE, Alaska (AP) — Richard Beneville, who was in his third term as the mayor of Nome and was known for bringing the flair of the New York stage to the wilds of western Alaska, has died. He was 75.

Beneville died Monday after being readmitted to the hospital with pneumonia.

Beneville had last been tested for the coronavirus on Friday, and the results came back negative, the city said in a release announcing his death.

“It is a loss,” Nome City Manager Glenn Steckman told The Associated Press.

“There was no more enthusiastic supporter of Nome, of any city I’ve worked at, than Mayor Beneville,” Steckman said by phone. “He was a character, he was unique but he loved the city and he loved the citizens.”

Beneville was a flamboyant, gregarious man who constantly used the phrase “Hello Central!" That was the old operator's assistance at central exchange before people could dial their phones. It was also one of the last phrases he uttered, the city release said.

“Hello! Central! My friend Richard was as colorful as Nome, as tough as Nome, and as remarkable as Nome," Anchorage Mayor Ethan Berkowitz said in a statement. “I am going to miss him for his exuberance, his warmth, his humor and for his perseverance. One of the Northern Lights just winked out, but Richard will always be winking back at us.”

Gov. Mike Dunleavy ordered state flags be lowered to half-staff on May 18 to honor Beneville. “Richard Beneville was a true leader who left a positive impact in Nome that will never be forgotten,” Dunleavy said in a statement. “Nome will not be the same without Richard.”

Every March, Beneville would also entertain bored volunteers waiting for mushers in the Iditarod Trail Sled Dog Race to arrive at the finish line in Nome. He would don a top hat and tails, and read the poetry of Robert Service to volunteers crowded inside the city’s mini convention center. He also distributed “I Love Nome” buttons wherever he went.

He performed in summer stock and off-Broadway productions after growing up in a military family. In the early 1980s, his family staged an intervention because of his drinking and gave him a one-way ticket to Alaska, where his brother worked at a brokerage, according to a 2016 profile of him in the Anchorage Daily News.

He first lived in Barrow and then moved in 1988 to Nome, where he drank a case of beer a day, Beneville told the newspaper. Then one day, he walked into an Alcoholics Anonymous meeting, and his life changed.

He eventually became the community schools director for Nome Public Schools. After retiring from the district, he opened up his own tour company. Before selling in 2018, he would shuttle tourists around Nome in a van, regaling them with tales of Nome’s colorful history and showing them the tundra and the occasional herd of wild musk ox.

Health problems prevented him from making a planned advocacy trip to Washington, D.C., in February, but he recovered enough to attend the March ceremonial start of the Iditarod in Anchorage, walking along the starting route, greeting fans and mushers. He always urged people to visit Nome for the finish, calling the event “Mardi Gras, but with dogs!”

Last June, the Nome Arts Council and the community thanked Beneville for all he had done for the community with an event that included performers singing a medley of Broadway shows he had directed over the years.

Ron Horner, the district’s longtime music director, thanked Beneville for his contributions to the youth of Nome, the Nome Nugget reported.

“Being on stage, seeing the bright lights and the audience, you carry that feeling with you all your life,” Horner said. “So in turn, we also carry a piece of Richard Beneville inside of us.”