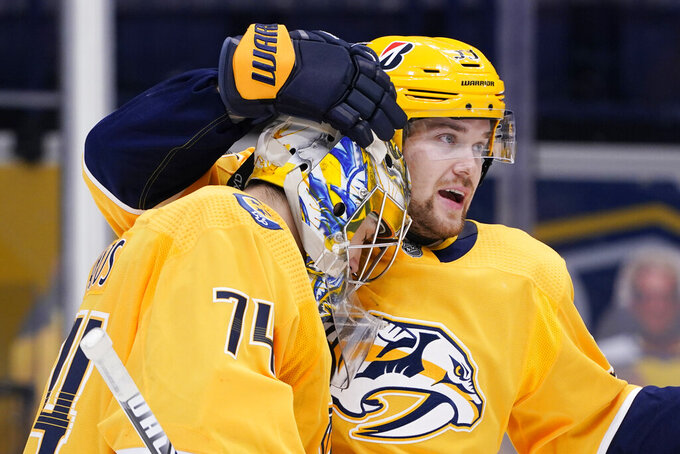 It's all part of why they're off to an undefeated start.

Colton Sissons, Luke Kunin and Filip Forsberg also scored in the third period, and Rocco Grimaldi had a goal for Nashville. Goalie Juuse Saros made 42 saves.

“We've had some timely goals and some key saves from Juuse,” Sissons said of another strong third period. "He was unbelievable tonight, and just having contributions from different guys throughout the lineup it's been there so far. Hopefully we can keep it up.”

“I'm feeling good,” Saros said. “It's a good start, two wins. But obviously it's a lot of hockey to be played in a short time, so you just try to focus on getting better every day and every game.”

The Predators now have won seven of their last eight against Columbus in Nashville, a nice omen for the former Central Division rivals reunited in this pandemic-affected season.

Columbus captain Nick Foligno and Alexandre Texier each scored a goal, and Michael Del Zotto had two assists. The Blue Jackets are 0-2 for the fourth time in six seasons, but coach John Tortorella said he saw some encouraging play.

“We developed 25 scoring chances,” Tortorella said. “Do we need to clean up some stuff? Sure, but I’m encouraged by a lot of different things with our hockey club tonight.”

Similar to opening night when Nashville won 3-1 Thursday night, these teams went into the third period tied at 1. Forsberg put Nashville ahead grabbing the puck and going up the left boards before putting a wrister past Elvis Merzlikins' glove.

Texier tied it up at 2 at 5:47 of the third, deflecting a shot from Liam Foudy. But Richardson put a wrister over Merzlikins for his first goal since signing with Nashville. Kunin scored from the slot at 14:27, and Sissons got Nashville's fourth goal of the period 55 seconds later.

“It's nice to chip in when you can that’s for sure,” Richardson said.

Foligno put Columbus up 1-0, the second straight game the Blue Jackets scored first. Saros stopped Del Zotto's shot, but Foligno tapped in the rebound behind the goalie for the easy goal at 7:58.

Grimaldi tied it up less than two minutes later. He got the puck from Ryan Ellis and skated up the right boards before beating Merzlikins glove-side with a slap shot from the right circle.

NICE TO SEE YOU AGAIN

Eleven different Predators had a point in this game, including Matt Duchene to celebrate his 30th birthday. Nashville also had 15 different players register at least one shot.

The Predators recalled forward Mathieu Olivier from the taxi squad before this game. Olivier made his NHL debut last season with Nashville and played in eight games. The forward was born in Biloxi, Mississippi, when his father played for the ECHL's Mississippi Sea Wolves.

Columbus continues its four-game road swing to open the season Monday at Detroit.

Nashville hosts Carolina in a back-to-back Monday and Tuesday before hitting the road for the first time this season.