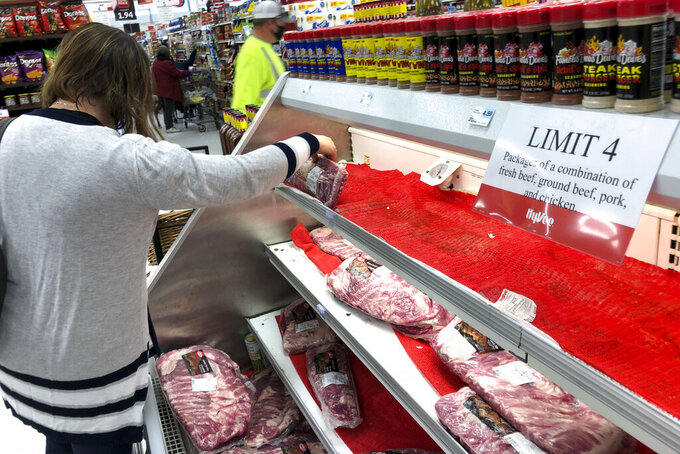 A sign limiting customers to four items of fresh meat hangs over semi-stocked shelves at a Hy-Vee supermarket in Omaha, Neb., Wednesday, May 6, 2020. A Hy-Vee spokesperson said the decision to put a limit on the sale of meat is due to worker shortages at plants as well as an increase in meat sales. (AP Photo/Nati Harnik)

LINCOLN, Neb. (AP) — Nearly one out of six coronavirus cases in Nebraska have been linked to the state's meatpacking plants, Gov. Pete Ricketts said Thursday amid criticism that not enough is being done to protect the health of their workers.

Ricketts said public health officials have linked about 1,005 of Nebraska's 6,771 coronavirus cases to meatpacking plants. Nebraska's small, mostly rural meatpacking communities have become some of the biggest hot spots both statewide and nationally, with Hall County surpassing the much larger Omaha area.

Asked whether he should have done more to prevent the spread of the virus in the plants, Ricketts said critics were trying to “Monday morning quarter back" on a disaster that the state hasn't faced since the 1918 Spanish flu outbreak.

“Hindsight's always going to be 20/20,” he said at a news conference. “It's called, yes, if I had known things two months ago that I know today, I would have done things differently. But that's called experience. Of course you hope you'd learn from your experience to do a better job going forward in the future, and that's what we've done.”

Critics said state and local officials and many of the meatpacking plants didn't act soon enough and still haven't taken all the steps necessary to protect workers, many of whom are non-English-speaking immigrants.

Rose Godinez, an attorney for the ACLU of Nebraska, said workers have told her that some plants are following the recommendations of local and federal public health experts, but others aren’t. The group unveiled a petition to local health districts on Thursday with more than 900 signatures, calling for more testing and protective equipment for workers and asking companies to offer paid sick leave.

Godinez said some workers received their first masks just two weeks ago, even though the outbreak began in March, and others are being pushed into unfamiliar jobs to compensate for staffing shortages.

“What we’re seeing is a lack of worker input,” she said. “The workers aren’t being put at the table to say whether the guidelines are being followed.”

In Omaha, Douglas County Public Health Director Dr. Adi Pour said Thursday that 392 meatpacking workers have contracted the virus out of 1,205 confirmed cases. Pour said medical professionals are working with the nine metro-area plants to get additional testing and housing for those who are already infected and need to stay away from their families.

“From a public health standpoint, I'm concerned that we are not having our infection under control,” she said at a separate news conference with Omaha Mayor Jean Stothert.

Ricketts said state officials learned important lessons from an initial outbreak at the JBS beef plant in Grand Island, the state's first hot spot and hardest-hit region. He said state officials used that experience to test more aggressively in Lexington, another meatpacking town that hasn't seen as many cases but is still considered a hot spot.

He has steadfastly refused to tell meatpacking plants that they have to close, arguing that they're an essential part of the nation's food supply and that Nebraska would experience “civil unrest” if residents weren't able to buy meat.

Ricketts also reiterated Thursday that he won't require local health departments to release the number of cases at individual companies.

He argued that those numbers are inaccurate because some people who tested positive have lied about working at specific plants, and public health officials aren't able to verify those claims with meat-packers without violating federal privacy laws. He said such mistakes would be minimized with aggregate data.

Meanwhile, the Department of Health and Human Services reported Wednesday that four more people Nebraska residents have died of the coronavirus, bringing the statewide total to 86 since the pandemic began.

One death was in Hall County, but details weren't immediately provided. Two others were both men in their 60s with underlying health conditions, one in Adams County and the other in Colfax County. No details were given on the fourth death.

Nebraska had 6,771 confirmed cases as of Wednesday evening. More than 37,800 people have been tested. The number of new cases dipped to 311 on Wednesday after a sharp increase over the last two weeks, but the state's hospitals reported a large number of available ventilators and beds.