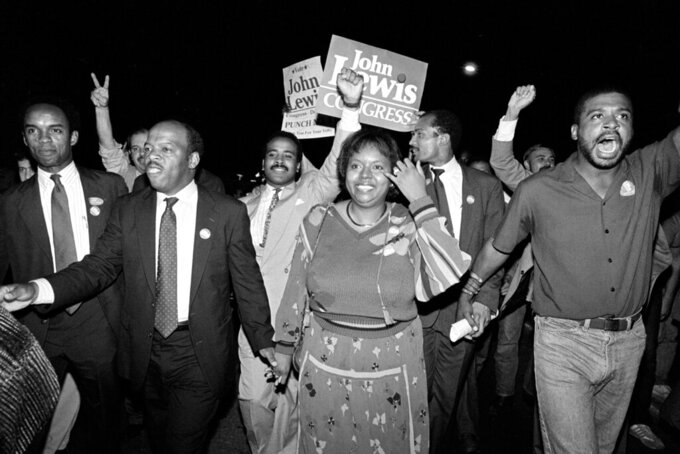 FILE - In this Tuesday night, Sept. 3, 1986, file photo, John Lewis, front left, and his wife, Lillian, holding hands, lead a march of supporters from his campaign headquarters to an Atlanta hotel for a victory party after he defeated Julian Bond in a runoff election for Georgia's 5th Congressional District seat in Atlanta. Lewis, who carried the struggle against racial discrimination from Southern battlegrounds of the 1960s to the halls of Congress, died Friday, July 17, 2020. (AP Photo/Linda Schaeffer, File)

Rights activists, politicians from both parties and many other people touched by the legacy of John Lewis mourned the congressman and pillar of the civil rights movement Saturday, lauding the strength, courage and kindness of a man whose lifelong struggle against racial discrimination took him from a bridge in Selma to the nation's Capitol.

“As a young man marching for equality in Selma, Alabama, John answered brutal violence with courageous hope,” said former President George W. Bush. “And throughout his career as a civil rights leader and public servant, he worked to make our country a more perfect union.”

Former President Barack Obama, America's first Black president, recalled being sworn in for his first term: “I hugged him on the inauguration stand before I was sworn in and told him I was only there because of the sacrifices he made.”

Lewis died Friday, several months after the Georgia Democrat announced that he had been diagnosed with advanced pancreatic cancer.

Lewis, 80, often recalled his upbringing in the segregated South, including how he was denied a library card because the library was for “whites only.” He was determined to destroy segregation, joining with the Rev. Martin Luther King Jr. as founder of the Student Nonviolent Coordinating Committee to help plan the 1963 March on Washington.

He went on to make a career in politics, representing Atlanta in Congress for more than 30 years, and all the while imploring people to press for justice — to make what he came to call "good trouble, necessary trouble.”

Atlanta Mayor Keisha Lance Bottoms described that call as "a generational rallying cry for nonviolent activism in the pursuit of social justice and human rights.”

“He fought harder and longer than anyone in our nation’s continuing battle for civil rights and equal justice," the NAACP said in a written statement.

He also scrapped with President Donald Trump, refusing to attend his inauguration and calling him a racist. Trump ordered flags flown at half-staff to honor Lewis — as required by law for sitting members of Congress. More than 14 hours after his death, following an array of unrelated retweets and a golf outing, he offered condolences.

“Saddened to hear the news of civil rights hero John Lewis passing,” Trump tweeted. “Melania and I send our prayers to he and his family.”

Those mourning included baseball legend Hank Aaron, who said he and Lewis “connected to the roots.”

“By that I mean we were born and grew up in the highly racist and segregated south, in the state of Alabama,” Aaron said. “He committed his life to the struggle for justice and equality for all people.”

Democratic Sen. Kamala Harris of California noted that Lewis stood not just for an end to racial discrimination, but for gay rights, such as when he opposed the federal ban on gay marriage, and for immigrant rights, such as an end to family-separation policies.

There was no immediate announcement on funeral plans, which could be affected by the coronavirus pandemic. In an order, Georgia Gov. Brian Kemp said flags on state buildings would be lowered through sunset on the day of Lewis’ interment.

State law says Kemp must schedule a special election to fill the current term of Lewis, who was first elected to represent Georgia’s majority Black 5th District in 1986, said Georgia Deputy Secretary of State Jordan Fuchs. A vote would have to be held within 30 days.

Separately, Democrats can appoint a replacement candidate to fill Lewis’ slot on the November ballot since he already had won the nomination for another term, said Fuchs.

In Congress, Democratic senators signaled a fight over Lewis' legacy after Majority Leader Mitch McConnell issued a statement lionizing him.

“I will never forget joining hands with John as members of Congress sang We Shall Overcome at a 2008 ceremony honoring his friend Dr. Martin Luther King, Jr.," McConnell wrote. "It could not have been more humbling to consider what he had suffered and sacrificed so those words could be sung in that place.”

The Democrats noted that McConnell had refused to bring the 2020 Voting Rights Act, passed by the House, up for a vote before the Republican-controlled Senate. The measure would restore federal oversight of state elections, after the conservative majority on the U.S. Supreme Court invalidated much of the 1965 Voting Rights Act in 2013.

Harris, Massachusetts Sen. Elizabeth Warren and others urged McConnell to allow a vote, and several said it should be given a new name: the John Lewis Voting Rights Act.