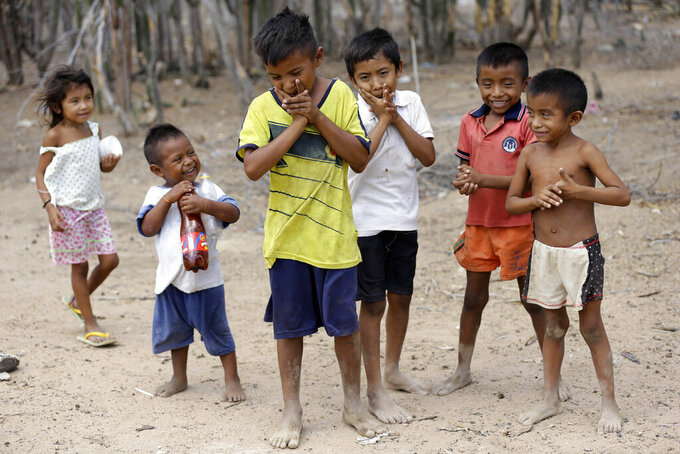 BOGOTA, Colombia (AP) — Lack of access to clean water is leading to alarmingly high levels of child mortality and malnutrition among Colombia’s largest Indigenous group — problems that could grow worse as a result of the pandemic, a human rights group warned Thursday.

The death rate of Wayuu children under the age of 5 in rural areas of the La Guajira department has been steadily increasing even as the nation’s overall figures decline, according to the report by Human Rights Watch based on government figures.

“Unfortunately, the children of La Guajira were left behind,” said Dr. Alia Sunderji, a pediatric emergency physician with John Hopkins University, which collaborated with Human Rights Watch on the study.

The researchers compared the limited potable water availability – just 4% of the Wayuu population in rural areas has access – and other basic services to parts of Africa, despite Colombia’s much higher levels of per-capita income.

The partial desert region along Colombia’s Caribbean coast is home to just 7% of the nation’s population but accounts for over 20% of malnutrition deaths for children under 5. Over 75% of the deaths are of Indigenous children, even though the Wayuu and other Indigenous people make up less than half of the department’s total residents.

The investigators interviewed more than 150 people in Colombia and found that mismanagement, corruption, the humanitarian crisis in neighboring Venezuela and the impacts of climate change have resulted in severe food insecurity.

The attorney general’s office estimates that about $5 million has been lost in La Guajira to corruption involving health and food programs. But shortages of prosecutors mean holding those responsible accountable is a slow process and many are never charged. Of the 47 prosecutors in La Guajira, only two focus on corruption by public officials.

“Unpunished government corruption in La Guajira has been a key factor contributing to poor access to water, food and health services that are essential for the survival of many Wayuu,” said José Miguel Vivanco, Americas director for Human Rights Watch.

The findings come amid rising COVID-19 levels in Colombia, which now ranks eighth worldwide in the total number of infections. The National Indigenous Organization of Colombia this month concluded there have been at least 7.093 confirmed cases and 244 deaths among the country's 69 Indigenous groups.

The Wayuu population – which includes at least 270,000 people – largely depends on informal labor and many have seen their livelihoods affected by the pandemic. A nationwide stay-at-home order in place since March and restrictions on travel have made it more difficult to reach municipalities where goods can be sold.

At least 171 Wayuu people have fallen ill with COVID-19, according to the national organization.

Dr. Beda Margarita Suarez, a Wayuu doctor who works in La Guajira, said members of the community are getting infected while trying to find work and food in nearby cities. She said it has proven challenging to isolate those who get sick because families traditionally live close together in homes with poor air circulation.

She said aid has also been slower to arrive and hunger steadily mounting.

“There are more cases,” she said. “And more mortality.”