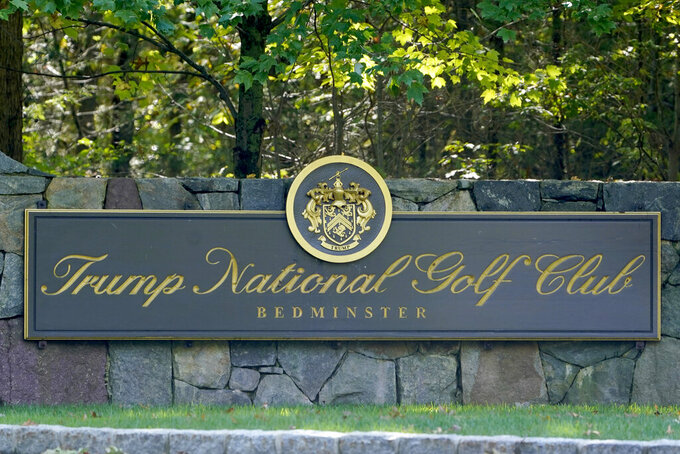 A sign is seen at the entrance to Trump National Golf Club in Bedminster, N.J., Friday, Oct. 2, 2020. With just a month to go until the election, President Donald Trump had a busy schedule in the week before the coronavirus hit home with him. Trump tweeted early Friday that he and first lady Melania Trump had tested positive for the coronavirus. (AP Photo/Seth Wenig)

Trump's doctor reported Friday that the president was “fatigued,” however, Piscopo, of “Saturday Night Live” fame, said that he’s never seen the president “more on top of his game" than the night before. Mehta called him "charismatic, energetic and jovial.”

Both New Jerseyans were part of a smaller group of Trump supporters fundraising for his campaign at his Bedminster golf course.

Mehta, a political newcomer with an accomplished background including a law degree and a doctorate in pharmacy, is running against Sen. Cory Booker in November’s election. Mehta said he was one of about 100 people at the outdoor fundraiser, but did not come in close contact with the president.

Piscopo said Trump came out of the portico to talk to guests seated at tables yards away. Both men said everyone was socially distanced. The president gave a 30-minute speech and answered several questions from supporters.

Mehta said that Trump spoke about voter fraud, the debate, his Supreme Court justice choice, and the coronavirus.

“He talked about a therapeutic development,” Mehta said, and that he underscored the need to get a vaccine out as soon as possible.

Trump announced in an early Friday morning tweet that he and first lady Melania Trump both tested positive for COVID-19. It’s unknown where the two contracted the disease. The announcement came hours after he confirmed that Hope Hicks, one of his aides he had been traveling with, got her own positive diagnosis.

When asked how he felt about Trump possibly knowing about her diagnosis, Mehta said he also has heard reports stating the opposite.

“Honestly, I’m not sure what’s true with these reports and it’s all speculation,” he said. “The bottom line is I wish the president and the first lady a speedy recovery.”

Piscopo had well wishes for the Trumps. “Like we say in New Jersey, he’s an animal. He’s going to be fine and I mean that in a good way.”

White House officials said Friday evening that Trump will spend a few days at Walter Reed National Military Medical Center out of precaution. The president had been injected with an experimental antibody cocktail by the White House physician.