Rioting after protest leads to curfews for Seattle, Portland 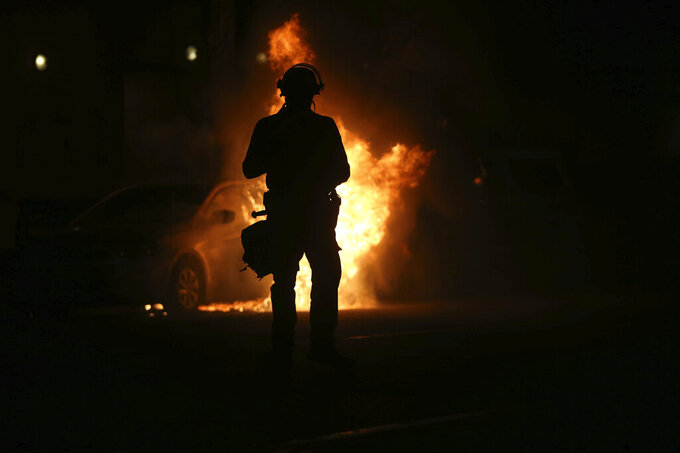 A police officer is silhouetted with a burning car is seen rear, as violence escalated after peaceful demonstrations, late Friday, May 29, 2020, in downtown Portland, OR. Hundreds of people gathered to protest the Minneapolis police killing go George Floyd. Floyd died earlier this week in police custody in Minneapolis.(Mark Graves/The Oregonian via AP)

Thousands of people gathered in downtown Seattle in the rain to protest the killing of George Floyd in Minneapolis. A largely peaceful demonstration happened Saturday afternoon, while police later deployed flash bangs to disperse people they said had begun throw rocks and bottles at officers. Police also pepper-sprayed demonstrators who got close to police lines, and officers with bicycles pushed people to move back.

The Washington State Patrol temporarily closed both directions of Interstate 5 through the city between Interstate 90 and Highway 520. Protesters marched through the lanes of the freeway.

“The freeway is not a safe or appropriate place for demonstration,” state patrol Chief John Batiste said in a statement.

News footage showed at least one destroyed police cruiser, other vehicle fires and people breaking into retail stores and other businesses. A police spokeswoman, Sgt. Lauren Truscott, said some people were arrested, though she didn’t have an exact figure.

Seattle Police said two rifles that were stolen from patrol cars that were set on fire have been recovered by a private security guard for a local television reporter.

Durkan late Saturday afternoon announced a curfew to begin at 5 p.m. for Saturday and Sunday to last through 5 a.m. in response to the protests. She also issued an order declaring an emergency and an order banning weapons.

Although many dispersed soon after, dozens remained downtown in defiance of the curfew, setting fires, breaking into retail stores and taking items while police fired tear gas and arrested at least one person.

The governor said he had activated up to 200 members of the Washington National Guard in response to a request from the city to help protect property, as well as manage crowds and traffic. Guard personnel will be unarmed and work under the direction of city leadership, the statement from the governor's office said.

“The National Guard is on stand by to assist the Seattle Police Department as requested by Mayor Durkan,” Inslee said. “They will only be utilized if absolutely necessary and we appreciate their efforts to help in this important work.”

Residents should remain in their homes “to the extent possible” and not travel in or through Seattle, said Durkan, Seattle Police Chief Carmen Best and Seattle Fire Department Chief Harold Scoggins in a statement.

“This curfew is intended to prevent violence and widespread property damage, and to prevent the further community spread of COVID-19 through continued gathering,” they said.

The tense scenes in Seattle followed a violent night in Portland, Oregon, where authorities said those responsible for the damage to police headquarters, a shopping mall and businesses will be tracked down.

Portland Mayor Ted Wheeler also imposed a state of emergency and a curfew, which resumed Saturday at 8 p.m. and will lift at 6 a.m. Sunday. And city officials in Eugene, Oregon, enacted a 9 p.m. Saturday curfew in part of the city following destructive behavior by some during protests.

Portland Fire Chief Sara Boone, who is African American, said the anger and violence is not only about the killing of George Floyd in Minneapolis, but a system that allows people of color to “feel fear every day."

“This is a moment of reckoning,” Boone said at a news conference with other city leaders. “We are going forward, together, to create an actual community where respect and dignity are our core values.”

Jo Ann Hardesty, an African American member of the City Council, said those responsible for the looting and burning were a small group of people who took the opportunity of earlier peaceful protests — that police had largely stayed away from — “to steal stuff and break stuff.”

“We can get justice for black people, but we don’t have to destroy our community to do it,” Hardesty said. She offered to help identify rioters from video images so they could be arrested and prosecuted.

In the past, Portland has seen numerous violent protests, often between far-right demonstrators and those opposed to them. Community activists have told police their heavy presence can be a trigger for violence.

The People of Color Caucus of the Oregon Legislature called the rioters opportunists and outliers who were disregarding the leadership of black community organizers. At one point, black community members placed themselves between a business and vandals to protect it from being destroyed, they said.

“We are just beginning to lay plans to reopen and these actions are destructive to our efforts as we try to weave together what COVID-19 has already torn apart,” the nine lawmakers said.

Portland police arrested at least 13 people before dawn Saturday. Seattle police were reviewing the use of force in one of at least seven arrests Friday night.