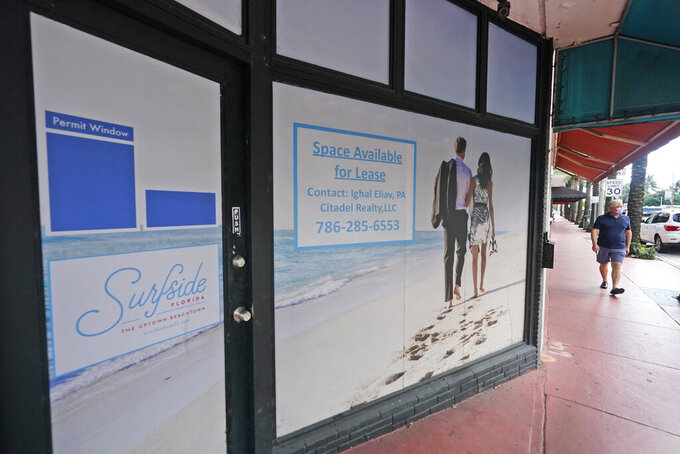 A pedestrian walks past an empty business available for lease, Monday, Oct. 12, 2020, in downtown Surfside, Fla. The pandemic and recession are squeezing big apartment building owners, with a surge in vacancies leading to a decline in rent growth for the first time in years. The U.S. vacancy rate for apartments rose to 5% in the third quarter, the highest level in eight years, according to Moody’s Analytics REIS. (AP Photo/Wilfredo Lee)

LOS ANGELES (AP) — The pandemic is squeezing big apartment building owners, with a surge in vacancies leading to a decline in rent growth for the first time in years.

The U.S. vacancy rate for apartments rose to 5% in the third quarter from 4.6% a year earlier, according to Moody’s Analytics REIS. That’s the highest national vacancy rate since the first quarter of 2012. The firm predicts vacancies will climb to 5.4% by the end of this year and continue rising in 2021.

Meanwhile, a measure called effective rent declined 1.8%, the largest drop going back to at least 1999, when Moody’s began publishing quarterly data. Effective rent is what’s left after taking out concessions offered by landlords to woo tenants.

All told, 62 out of 82 major apartment markets tracked by Moody’s recorded declines in effective rents in the third quarter, up from two a year ago.

The trends are a boon for people looking to move to a new apartment, because they’re likely to have a wider selection and incentives to lower their cost.

Still, what’s good news for tenants is usually not favorable for landlords, including real estate investment trusts, or REITs, that own apartments.

Despite demographic trends that continue to point to strong demand for rental housing as Generation Z comes of age, uncertainty over how long the pandemic will last and its impact on rental households’ ability to pay rent, have dimmed the outlook for apartment REITs and turned off investors.

While REITs overall are lagging the broader stock market this year, apartment REITs are among the worst-performing, along with owners of office and retail space, two commercial property types also hit hard by the pandemic as more people work and shop from home.

So far this year, the FTSE Nareit All Equity REITs Index, which includes 159 REITs, has a negative total return of about 11.1%, including dividends, according to the National Association of Real Estate Investment Trusts, or Nareit. By comparison, the broader market S&P 500 index is up about 8.2%, including dividends.

The 15 apartment REITs included in the Nareit index, meanwhile, have a negative total return of 26.2%.

Once concern is that more renters will miss payments as the pandemic and recession drag on. Because of their tax structure, REITs are required to pay out most of their income, which comes largely from rent payments, as distribution to shareholders.

In the spring, as much of the economy shut down in a bid to stem the coronavirus from spreading, publicly traded apartment owners began to see a decline in rent payments. The estimated monthly share of typical rent collected by apartment REITs was 93.8% in April, according to Nareit. That rate bounced back over the summer, reaching about 96% last month.

Some of that can be credited to the reopening of businesses and the billions in aid that the federal government poured into the economy, including loans for companies to keep employees on the payroll and a supplemental $600-a-week unemployment benefit package.

That beefed-up unemployment aid expired at the end of July, and efforts by Democrats and Republicans in Washington to reach a deal on a new round of fiscal stimulus have yet to yield results, fueling worries that there could be a wave of missed payments by renters among the millions of Americans who remain unemployed.

As of last month, the economy has recovered slightly more than half the 22 million jobs wiped out by the coronavirus. Some economists say it could take as long as late 2023 for the job market to fully recover.

As apartment owners sweeten their concessions to win over new tenants or get others to renew, the costs of those incentives is another red flag for Wall Street because they cut into REITs’ profits.

Most of the surge in concessions is happening in big cities like New York and San Francisco, driving down rents. In New York, effective rents sank 7.2% in the third quarter from a year earlier, beating the Big Apple’s previous record decline of 4.6% in late 2001, according to Moody’s. San Francisco’s fell 9.6%.

“You can get two months free rent without even asking,” said Haendel St. Juste, managing director at Mizuho Securities USA. “That tells you the extent that demand has dropped off. The question is: are we starting to get to the bottom of that?”

Apartment REITs with properties in Sunbelt cities such as Atlanta, Houston and Dallas are faring better than coastal metropolitan areas. Demand is stronger, which is leading to more stable tenant renewal rates and rent growth, St. Juste said.

REITs own a fraction of the overall U.S. apartment market. Still, the price and demand dynamic for small buildings and other privately owned properties has been subject to the same economic forces unleashed by the pandemic.

Zillow Group, which hosts listings for apartments and rental houses that are not necessarily owned by REITs, says the typical rent paid nationally rose 1.4% to $1,712 in September. That’s the first month-over-month increase since the start of the pandemic.

“This might just be a blip on the radar,” Clark said.