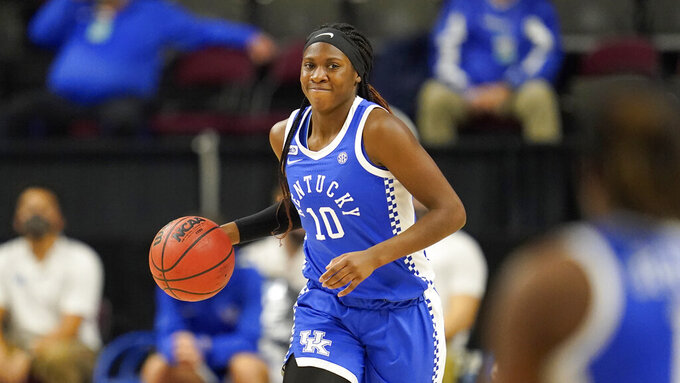 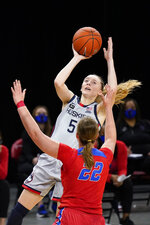 UConn and Baylor didn't get to play their scheduled game in January because Lady Bear's coach Kim Mulkey came down with COVID-19.

They have a chance to meet again if both top seeds advance in the NCAA Tournament's River Walk regional. But UConn must first win at least a of couple games without coach Geno Auriemma, who begins the tournament isolating at home after he too became infected with the coronavirus.

The Hall of Famer said having no control over what happens on the court 1,950 miles away will make it hard for him to watch.

“I might need to hide down in the basement and have somebody come down and give me the update," he said.

Associate head coach Chris Dailey, who is 10-0 filling in for Auriemma, will lead the Huskies. Connecticut is seeking a record 12th NCAA title and the Huskies first hurdle will be getting past High Point (22-6) in the first round on Sunday.

Dailey, who was inducted into the Women's Basketball Hall of Fame in 2018, said she doesn't expect Auriemma's absence will have much impact on how the Huskies play.

Their opponents are not coming in scared.

“It’s kind of cool,” High Point coach Chelsea Banbury said. “We get to play against some of the best players in the country. Let’s go out, let’s have some fun.”

Baylor , which opens with Jackson State, is working toward a fourth title and is technically the defending champion, having won the 2019 tournament.

Mulkey said her team is playing in part for the four seniors she had last year who were not able to defend their title after COVID-19 shut everything down.

“It was pulled out from under ‘em,” she said. “They never got a chance to get back to a Final Four. So, I want our players not to look back to that, but to always remember that could have been them. So play the game as if tomorrow’s not promised.”

Some other things to keep an eye on in the River Walk region:

Then there’s junior guard Anastasia Hayes, the Conference USA Player of the Year. The 2017 McDonald’s All-American got her start at Tennessee before being dismissed in August 2018. Hayes wound up back home at MTSU playing with her sister Aislynn,

“I’m just so blessed and honored that she’s even gets to play with me, and we play great together,” Anastasia Hayes said. “I know if I tell Aislynn, ’Make a shot,' she’s going to make a shot. And we have that chemistry that nobody else can ever have.”

Hayes says she doesn’t really talk to any of the Lady Vols, but she's given her coaches a bit of a scouting report on the Tennessee players she knows.

The River Walk region is loaded with some of the top individual talent in women's college basketball, including three AP first-team All Americans and five of the nation’s top seven scorers.

They are joined by the nation's leading scorer in Iowa freshman Caitlin Clark (26.7 points per game), the No. 2 scorer in MTSU's Anastasia Hayes (26.5), Big Ten player of the year Naz Hillmon (25.1) from Michigan, Florida Gulf Coast's Kierstan Bell (24.3) and Central Michigan's Micaela Kelly (23.9).

“It's a very humbling experience to me, because I know so many people who are also tagged to that list, a lot of them who I played USA basketball with," Hillmon said. To be mentioned with all of those people is something that you don't necessarily always put yourself in that place. You think about it, but you don't always think that it will come true.”