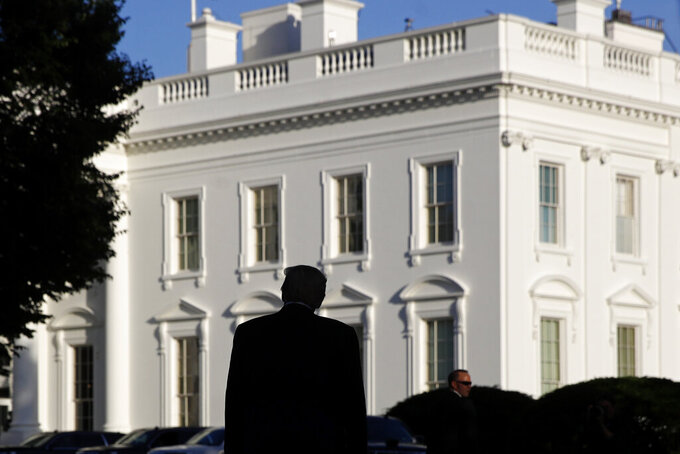 FILE - In this June 1, 2020, file photo President Donald Trump returns to the White House after visiting outside St. John's Church in Washington. President Donald Trump's vows to restore “law and order” and to protect what he's called the “Suburban Lifestyle Dream” draw from a decades-old playbook in Republican politics. (AP Photo/Patrick Semansky, File)

SAVANNAH, Ga. (AP) — The question was how he planned to address poverty. In his reply, the Republican running for president quickly pivoted to a central campaign theme — denouncing the fiery chaos that had erupted in American cities during protests over civil rights.

“We have reaped not a solution of poverty, but we’ve reaped the riots that have torn 300 cities apart, resulted in 200 dead and 7,000 injured throughout this country,” Richard Nixon said on Oct. 3, 1968, at a town hall in an Atlanta TV studio that aired live across the South. He vowed to restore “law and order" and decried “those who would destroy America, who would burn it.” He won the White House a month later.

It came to be known as Nixon's Southern strategy: a campaign that used fear of crime and lawlessness to tap into white Southern voters’ opposition to racial integration and equality without using overtly racist language. It was a strategy that Republicans honed gradually over decades — ultimately achieving dominance across the South and a political realignment that changed the electoral map for presidential candidates, the makeup of Congress and the tenor of the American debate about race.

It is now in President Donald Trump's hands.

At his nominating convention this week, Trump's party has repeatedly warned of lawlessness on America's streets, pointing to the sometimes violent protests over police killings of Black Americans. The party gave a platform to a St. Louis couple made famous for waving guns at a Black Lives Matter protest outside their home. The president’s son, Donald Trump Jr., described the race between Trump and Democrat Joe Biden as “shaping up to be church, work and school versus rioting, looting and vandalism.”

Historians and political observers say the lineage of this messaging is clear. The question isn't whether Trump is employing the same tactics that helped Nixon seize the White House from Democrats, but whether those tactics can work at this moment — in a more diverse America, beset by a pandemic and weighing whether to reelect a Republican incumbent.

“Trump has dusted off the old playbook that puts racial fear and grievance on the table,” said Otis Johnson, who served from 2004 to 2012 as the second Black man elected mayor of Savannah, Georgia. He was a graduate student in Atlanta when Nixon ran in 1968. Trump’s tactics, he said, are “just a replay for me of 50 years ago.”

But manipulating racial divisions to unite white voters goes back much further in American politics. Before the Civil War, ominous warnings of potential slave uprisings were used to get poor Southern white people to vote in solidarity with wealthier landowners, said Keith Gaddie, a political scientist at the University of Oklahoma.

After World War II, when returning Black soldiers demanded voting rights and found support among white veterans who had fought beside them, candidates still preyed on racial discord. They just weren't as direct.

“There are phrases associated with different policy areas that are meant to activate white concern about racial integration,” Gaddie said. "`Neighborhood schools' is code for segregated schools or opposition to busing. `Safe streets,' `safe neighborhoods' and `law and order.' It means, basically, `We’re going to keep the Blacks in line.'”

The South had been solidly Democratic until Republican Barry Goldwater unsuccessfully sought the presidency in 1964 — losing the race but winning Louisiana, Alabama, Mississippi, Georgia and South Carolina by campaigning on his opposition to the Civil Rights Act.

Four years later, Nixon's challenge was competing for Southern votes against George Wallace, a segregationist who was running for president as an independent between terms as Alabama's Democratic governor. Nixon had to peel away some Southern white voters from Wallace without alienating voters in other regions.

In his speech accepting the nomination at the 1968 Republican National Convention, Nixon promised a war on crime amid “cities enveloped in smoke and flame.” He also bluntly denied that “law and order is the code word for racism,” saying, “Our goal is justice for every American.”

But an internal memo from Nixon's 1968 campaign, later made public by his presidential library, suggests an intent to harness racial division. Drawing conservative Democrats to the GOP ticket would turn on “the law and order/Negro socio-economic revolution syndrome," campaign strategist Kevin Phillips wrote, adding that Nixon "should continue to emphasize crime, decentralization of federal social programming, and law and order.”

On Election Day, Tennessee, Virginia, Florida and the Carolinas went for Nixon as he won the White House.

Historians say subsequent Republican presidents adapted the strategy to suit the times. Ronald Reagan declared support for “states' rights” and railed against the “welfare queen” in 1980 campaign speeches. In 1988, George H.W. Bush's campaign and supporters used Willie Horton, a Black man convicted of murder who later raped a woman while out of prison on a weekend furlough, to paint Bush's Democratic opponent, Michael Dukakis, as soft on crime.

Lee Atwater, an advisor for both presidents, once acknowledged this evolution of the Southern strategy — from a direct appeal to racism to one that is “much more abstract” and uses issues like states' rights, busing and later taxes and cutting social services to communicate the same message: “Blacks get hurt worse than whites."

In the 1981 interview, Atwater argued the issues would become so coded that voters would not consciously identify them as racist.

Accusations of racism dogged Trump even before he became a candidate. He was widely criticized for promoting the false claim that Barack Obama was born outside the U.S. and ineligible to hold office. As president, Trump denigrated as “animals” some immigrants who entered the U.S. illegally. And he declared there had been "very fine people, on both sides” in violent clashes three years ago between white supremacists and counter-protesters in Charlottesville, Virginia.

“Trump is not necessarily very good at giving some of these more subtle messages,” said Alan Abramowitz, a political scientist at Emory University in Atlanta. “He tends to give away the game."

Speakers at the Republican National Convention this week have rebutted head-on the idea that Trump is racist. Former football star Herschel Walker praised Trump as a longtime friend who is “fighting to improve the lives of Black Americans, and all Americans.”

“Growing up in the Deep South, I’ve seen racism up close,” Walker said in a convention speech Monday. “I know what it is. And it isn’t Donald Trump.”

After losing presidential races to Southern Democrats Jimmy Carter and Bill Clinton, Republicans tightened their hold on the South by locking up support among evangelical Christians and voters who rejected feminism, said Angie Maxwell, a political scientist at the University of Arkansas and co-author of the book “The Long Southern Strategy: How Chasing White Votes in the South Changed American Politics.”

But coded racial messaging stayed in the mix and ultimately was aimed at sympathetic voters outside the South.

Will the strategy work? Maxwell said many more Americans seem to be grappling with fallout from the pandemic — such as deciding whether it's safe to send children back to school — than with outbursts of violent protests.

Meanwhile, the lawlessness Trump is calling attention to has unfolded on his own watch.

“Trump is the president," Abramowitz said. "So it’s a little bit strange for the incumbent president to be running on a platform of: `We’ve got these terrible problems. Elect me and I’ll solve them.'”